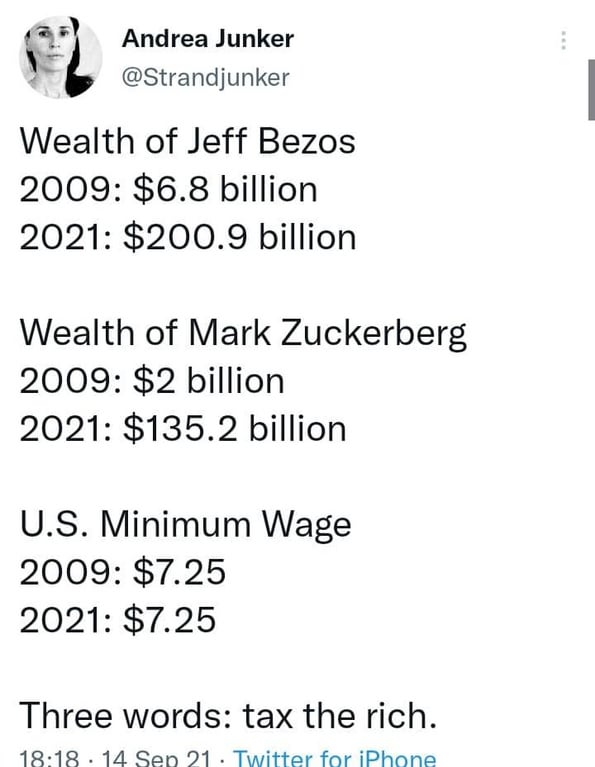 quote:
It makes me cringe seeing people call AoC a hypocrite for her met gala dress

People at the met gala aren't the rich people anyone should be worried about. They have a large yet reasonable amount of money. More to the point, they often pay their taxes

You can aspire not only to have money, but more money than you ever dreamed, and still not be worried at all about high end wealth taxes

on 9/15/21 at 12:46 pm to stout
Reading through a few comments shows those people are too stupid to realize capitalism lifts standards of living and not just one class but all classes.
Back to top
Reply
Replies (2)
OptionsTop
Replies (2)

quote:
It makes me cringe seeing people call AoC a hypocrite for her met gala dress

People at the met gala aren't the rich people anyone should be worried about. They have a large yet reasonable amount of money. More to the point, they often pay their taxes

quote:
They have a large yet reasonable amount of money.

i mean..i pay at least that much when i go to the movies or a sporting event.
Back to top
Reply
Replies (0)
OptionsTop
Replies (0)

re: People still don't understand net worth/wealth vs incomePosted by Putty on 9/15/21 at 12:49 pm to stout

quote:
People at the met gala aren't the rich people anyone should be worried about. They have a large yet reasonable amount of money.

Even ignoring the logical fallacies that net worth=income, I'll bet my bottom dollar than not a single person with an AGI under $400k paid $35k for a ticket to that snob fest.
Back to top
Reply
Replies (0)
OptionsTop
Replies (0)

on 9/15/21 at 12:52 pm to stout
Ah the stupid. Are most patrons of the Met Gala billionaires, no. Are most patrons filthy rich and have more money than the average person can dream of, abso-fricking-lutely. Tax the rich, but I’m not rich, theses people are the rich - a rich man’s response.
Back to top
Reply
Replies (0)
OptionsTop
Replies (0)

1) Have never looked at a donor list for their political heroes.

2) Are quite ignorant of our tax code, deductions, credits and who is best positioned to take advantage of them.

3) Are quite ignorant of the economical effects that come with significant tax hikes "on the rich".

5) Are not paying attention to who has been laying off employees, struggling to stay in business and even closing their doors during the pandemic and have no clue how destructive these tax hikes would be on them.

6) Are ignoring the fact those billionaires were still getting fatter while black Jesus was in office for 8 years...raising taxes...making the rich pay "their fair share"...and watching the economy stagnate at the same time.

re: People still don't understand net worth/wealth vs incomePosted by concrete_tiger on 9/15/21 at 1:08 pm to stout
Look at these ridiculously high achievers that had big ideas and made them happen! (even if their politics suck)

Now, let's compare them to people so dumb their best option is drying cars at a car wash.

re: People still don't understand net worth/wealth vs incomePosted by concrete_tiger on 9/15/21 at 1:14 pm to concrete_tiger
Spending any amount of time on Twitter is depressing to see the sheer number of people, real or not, that think we would all be happier, more productive people if everyone earned the same amount. Why would any human do the "hard" or "complicated" things, if doing nothing or the bare minimum yielded the same results?

to Everyone
Advertisement
Back to top
93and99

re: People still don't understand net worth/wealth vs incomePosted by 93and99

People either don’t understand the meaning of “slippery slope” or don’t care.

After opening the door to taxing the rich, whether on their income or their wealth, the definition of “rich” can be changed at any time.
Back to top
Reply
Replies (0)
OptionsTop
Replies (0)

on 9/15/21 at 2:44 pm to stout
Hell, people don't realize that taxes on corporations are taxes on everyone.
Back to top
Reply
Replies (1)
OptionsTop
Replies (1)

re: People still don't understand net worth/wealth vs incomePosted by McLemore on 9/15/21 at 2:50 pm to stout

re: People still don't understand net worth/wealth vs incomePosted by AlterEgo89 on 9/15/21 at 4:41 pm to Zach

quote:
Hell, people don't realize that taxes on corporations are taxes on everyone.

Economists are fairly split on this to be honest. It's not as clear cut as being made out because it's a tax on profits, not revenues.

I think increasing corporation tax is nonsense though. It's one of the policies I don't particularly like as a Biden voter. Corporation taxes should be fairly low because it's a really bad tax - it's a really inefficient tax and doesn't raise the money it should.

Wealth does earn dividends though in many cases, which you could argue is a form of income. You can also borrow on portfolios through asset-backed financing, which acts as a form of income. I have an account with a private bank with a significant amount and they let me borrow money off my investments, which is theoretically income that isn't taxed.

Jeff Bezos can borrow a significant level of his wealth through asset-backed financing, which would be an income. It's a very clever way of getting money without needing to pay capital gains tax. If anyone has over $2-3M in stocks, I highly recommend you go to a private bank of a bulge bracket like JP Morgan and get asset-backed loans/financing. It's really convenient to make money without needing to sell stocks and interest rates are so low. Jeff Bezos uses asset-backed financing so his wealth does act as an income to an extent.

However, yeah, it's annoying when people don't get the difference between realized income and stock value. There are clever ways to avoid paying Capital Gains Tax though, which is the tax on wealth.

re: People still don't understand net worth/wealth vs incomePosted by Azkiger on 9/15/21 at 4:52 pm to stout

quote:
More to the point, they often pay their taxes

on 9/15/21 at 5:00 pm to stout
So we could take all their wealth and not come close to filling the US budget hole…
Back to top
Reply
Replies (0)
OptionsTop
Replies (0)

on 9/15/21 at 5:17 pm to stout
She is talking about taxing Democrats. Have at it. The large majority of high net worth people are voting Democrat these days.
Back to top
Reply
Replies (0)
OptionsTop
Replies (0)

Latest LSU News »
Video: Jacques Doucet Talks With Attorney Don Jackson About The John Emery Situation
"It's not a case of LSU dropping the ball."
Ed Orgeron Provides Estimated Timeline For Myles Brennan To Return
Poll: What Will Be The Outcome Of The LSU/Central Michigan Game?
Times Of Interest: LSU vs. Central Michigan
LSU Names Guest Captains For Central Michigan Game
Sports Lite »
Nick Saban Talked About Preparing For Florida’s 2-QB System
Who ya got today?
Saints Make Injury Decision On 2 Key Defensive Players
Stephen A. Smith And Tim Tebow Make Bet On Alabama Vs. Florida Game
Golfer Paige Spiranac With A Travel Update
'The Mountain' From 'Game Of Thrones' Had Shed A Ton Of Weight For Boxing Match
Latest SEC Headlines »
What Will Be The Outcome Of The SEC Game Of The Week: Alabama vs. Florida
No. 1 vs. No. 11.
Georgia Defender Likely Out For Season With Leg Injury
Gators Starting LB Ventrell Miller Out For Season With Torn Biceps Tendon
SEC Football TV Schedule For Games Of September 25
Week 2: SEC Football Players Of The Week
Popular
Ed Orgeron Provides Estimated Timeline For Myles Brennan To Return
Brennan broke his non throwing arm right before fall practice started.
Tulane's New 'SEC Champs' Helmet Decal Is Going Viral After Lane Kiffin's Comments
Here's What Jim McElwain Had To Say About LSU Ahead Of Saturday's Game
Two LSU Defensive Starters Remain Out This Weekend vs. CMU, Ed Orgeron Says
UPDATE: Arch Manning Has Major SEC Visit Scheduled For Saturday
Back to top