1
IIRC, these are made in Mississippi.

Imported full-size pickup trucks have never been able to capture the outright insane sales figures that their domestic competitors have enjoyed for years on end. For some automakers, that means returning to the drawing board and trying to find unique advantages. For others, it may just spell the end, after years of trying and coming up short.

Thus, Nissan will stop selling the Titan full-size pickup in the next few years, Automotive News reports, citing sources familiar with the decision. That source told AN that Nissan is deciding whether to end the Titan's lifecycle for the 2024 or 2025 model year, which means it could be discontinued as early as the end of next year. 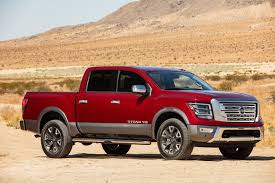 Posted by MyRockstarComplex on 7/1/22 at 6:57 am to TDsngumbo
Titan was nice. Good smooth driver and nice interior setup.

Every other dealership shite all over it and told me they were on the way out.
Back to top
Reply
Replies (0)
OptionsTop
Replies (0)

No gimmicks like turbochargers, hybrids, or cylinder deactivation.
Back to top
Reply
Replies (2)
OptionsTop
Replies (2)

Posted by Ace Midnight on 7/1/22 at 6:58 am to member12
Probably good for Toyota. I didn't realize Tundras were such low volume. Every third truck around here is a Tundra. Of course, I'm probably ignoring fleet sales and such.
Back to top
Reply
Replies (2)
OptionsTop
Replies (2)

quote:
Of course, I'm probably ignoring fleet sales and such

on 7/1/22 at 7:04 am to member12
I had a Titan and liked the look of it but the god damn thing literally turned off as i was driving it. Barreling through ponchatoula and I had to restart the ignition after a moment of horror. Also was a maintenance hog. Nice truck but frick that.

Traded it for a f150 which i have driven like 350k+ miles and it still only asks for the occasional oil change while running like the day I got it.

quote:
I’ll probably catch so much hell for this but I actually kinda like the Nissan Titans.

quote:
I wonder if they will continue making Armadas

100% will. They are now the QX80 lite, a staple of the soccer mom community.
Back to top
Reply
Replies (2)
OptionsTop
Replies (2)

quote:
100% will. They are now the QX80 lite, a staple of the soccer mom community

I go weeks without seeing an armada or qx80 on the road.
Back to top
Reply
Replies (0)
OptionsTop
Replies (0)

on 7/1/22 at 7:13 am to member12
Garbage trucks from a garbage vehicle maker. Yota and Honda vehicles shite on Nissan. Props for them for at least continuing forward when the Tacoma pushed everyone else out of the midsize market for a decade
Back to top
Reply
Replies (1)
OptionsTop
Replies (1)