on 7/4/22 at 11:24 am to GEAUX5
Don’t think that’s a wild theory at all. I noticed when I rewatched S1E1 that there was a silhouette of a man in the road instead of a demagorgon when Will swerved off the road before being abducted.
Back to top
Reply
Replies (0)
OptionsTop
Replies (0)

quote:
Just saw a wild theory that said Vecna took Will in S1. It shows a shadow that looks like Vecnas outline, and has the same breathing and clock chimes. Also the use of telekinetic powers that a demogorgon doesn’t possess.

He survived because he was singing his favorite song.

There's definitely gonna be some sort of connection between the two expounded on in the next season, they basically set it up in Ep. 9 where Will said he can feel that Vecna is still alive. I'll have to go back and rewatch season 1 to see if there's any hints at this, but that would be some crazy foresight and planning on the writers' part.

I still don't fully understand how Vecna and the Mind Flayer work. I know Vecna essentially created MF out of that disorganized energy, but is MF it's own "being" or is it simply a vessel for One to enter other's minds that he fully controlled?
Back to top
Reply
Replies (0)
OptionsTop
Replies (0)

quote:
It shows a shadow that looks like Vecnas outline, and has the same breathing and clock chimes. Also the use of telekinetic powers that a demogorgon doesn’t possess.

I tried rewatching the scene, but the silhouette isn’t on screen long enough to tell. I didn’t hear clock chimes, but they unlocked the chain on the door at Will’s house and I don’t remember any other scene in the series where a demogorgan could move things with its mind like that.

Any explanation on how the season 1 demogorgan could seemingly open temporary gates all around Hawkins to take victims, but the demogorgans in Russia couldn’t just open a gate to escape captivity?

ETA: and how did the Russian demogorgans survive, but the mind flayer in the mall die when Hopper and Joyce destroyed the laser and closed the gate?
This post was edited on 7/4 at 12:10 pm
Back to top
Reply
Replies (1)
OptionsTop
Replies (1)

on 7/4/22 at 12:36 pm to MelGibsonPatriotGif
I’m sure it’s something obvious that I just simply missed, but where did the Conan sword Hop picked up come from?
This post was edited on 7/4 at 12:37 pm
Back to top
Reply
Replies (2)
OptionsTop
Replies (2)

on 7/4/22 at 1:21 pm to Soul Gleaux
Leftover from the fight with Hopper and Russian prisoners vs the demogorgan before it escapes. Prison guard gives them the key to the weapons locker before the fight
Back to top
Reply
Replies (0)
OptionsTop
Replies (0)

on 7/4/22 at 1:28 pm to Tiger Prawn
the video i watched said possibly the mind flayer or vecna controlled the demorgogan that took him
Back to top
Reply
Replies (0)
OptionsTop
Replies (0)

on 7/4/22 at 3:59 pm to MelGibsonPatriotGif
Apologies if this was mentioned but I’ve avoided the thread to avoid spoilers.

At the end of the season, Will gives it to Mike and says Eleven commissioned it.

Was he just sacrificing his gift to convince Will that he needs to be there for Eleven and that he is the “heart?” That’s the only thing that makes sense but the Duffer Brothers already made mistakes this season (with Will’s bday being the date on the video camera recording) so wasn’t sure.
Back to top
Reply
Replies (1)
OptionsTop
Replies (1)

quote:
I wish the ending had some tweaks though, such as an explanation as to why the 4 gates are still open when Max lived.

This is a pretty easy explanation. She did die. She was dead for about a minute, which is directly stated at the hospital. That’s all the time needed to open the gates.

One thing I thought that was odd about the ending was when Eleven gets free from the vines. She falls down to her knees and the screen goes black for a few seconds. Then it cuts to Vecna flying through the air. What was the purpose of that odd editing?! They could have made it continuous, where she falls to her knees and is extending her arm out and using her powers to throw him away from Max. I felt that was a very odd choice.
This post was edited on 7/4 at 4:11 pm
Back to top
Reply
Replies (1)
OptionsTop
Replies (1)

quote:
I liked season 4 a lot more than season 3. Just finished the finale and that was one wild arse ride

After watching season 4, I think they could've skipped season 3 from a plot standpoint. Season 3 didn't really advance the story now that we know the origin story of 001 and the Upside Down. Instead we could've gone S1 = intro to the Upside Down, S2 = intro to the Mind Flayer and hinting of a more coordinated enemy, S4 = explanation of how the Upside Down was created and the ultimate goal of the main antagonist.

I don't think Season 4 was perfect, but I'm feeling better that the writers will wrap up the story line in a satisfying way rather than letting it devolve as we've seen with other shows (Game of Thrones, Westworld, The Walking Dead, etc.).

I would like them to explain Hopper's miraculous, Wolverine-like healing of his foot though...
Back to top
Reply
Replies (1)
OptionsTop
Replies (1)

on 7/4/22 at 4:53 pm to threeputtforbogie
I've enjoyed it. Cannot wait until last season. The Metallica shred was one of the best scenes in the show. Eddie was my favorite this season. Murray always delivers as well. 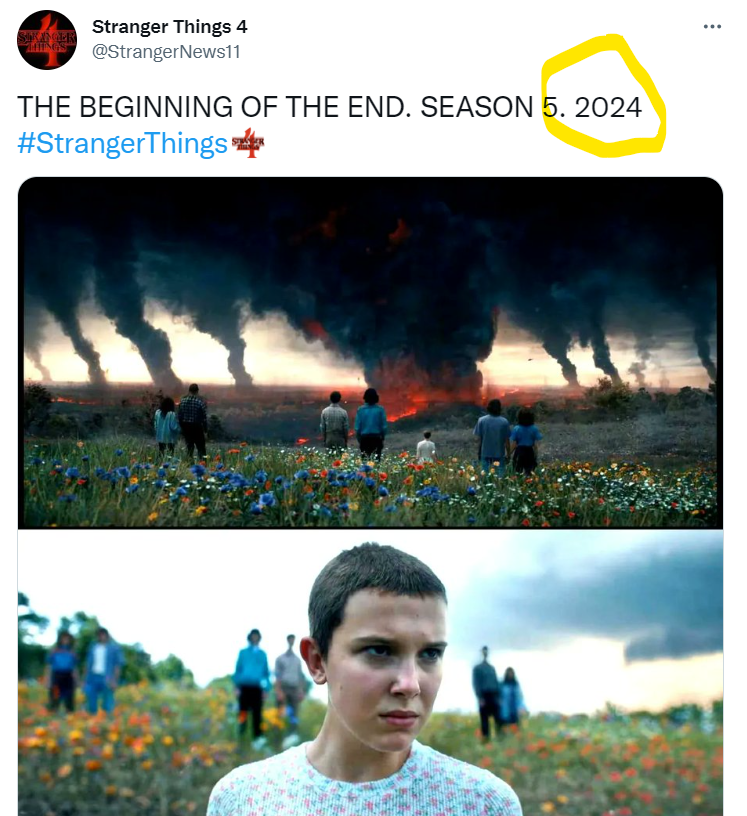 2024!? Why does it take Netflix so long to shoot and release shows? I appreciate that the pandemic contributed to the long delay between S3 and S4, but what's the excuse now?

on 7/4/22 at 7:22 pm to Sl0thstronautEsq
May have missed it but how did Eddie get power for the guitar and amp in the upside down?

But they haven’t started filming S5 yet, so 18 months is pretty reasonable timeframe considering the amount of CGI its probably going to have. S2 came out in Oct 2017 and S3 didnt come out until July 2019, almost 2 years.
Back to top
Reply
Replies (0)
OptionsTop
Replies (0)

quote:
I’m sure it’s something obvious that I just simply missed, but where did the Conan sword Hop picked up come from?


The weapon closet from the initial prisoner fight with the demagorgan. From there the situation completely devolved to the moment Hopper picks it up.
Back to top
Reply
Replies (0)
OptionsTop
Replies (0)

on 7/4/22 at 8:13 pm to UnluckyTiger
Duffer brothers also said season 5 won't be as long but finale will be feature length again
Back to top
Reply
Replies (1)
OptionsTop
Replies (1) 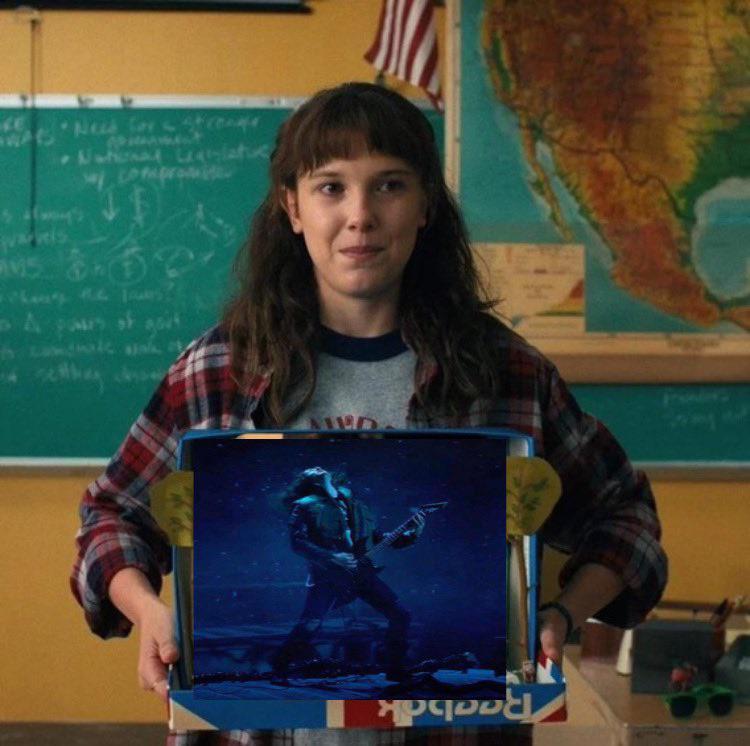 quote:
Spoilers) I understood it as being a sort of life force that was intertwined with the demagorgons that were more or less benevolent creatures just existing as a hive mind in this dimension.

Yea you see one milling around in the back as he wanders through. Also 11 “saving” max is definitely a vessel for vecna or whatever to move on to the next season

Posted by MusclesofBrussels on 7/4/22 at 11:55 pm to S
Just finished, great season. Max and Eddie were the MVPs of this season, really sad to see Eddie go.

I'm pretty apprehensive of how a time jump could possibly work given how this season ended. Hopefully they stick the landing with the last season
Back to top
Reply
Replies (1)
OptionsTop
Replies (1)

Posted by Frac the world

The Thanos of Netflix

Favorite moment of the entire series is Dustin head banging with a smile on his face while Eddie shreds, meanwhile hundreds of Demobats are on the way. He loved the shred so much he could’ve cared less about death.

Also loved the Halloween shoutout, shoot Vecna off the top deck then go down and he’s gone, classic Michael Myers.

Last season finna be lit. The board is set, the pieces are moving