President Donald Trump has the authority to sign off on a deal, but continuing concerns from national security officials could sway his decision. The agreement remains on the table, with discussions continuing between administration officials and the companies, said the people, who asked not to be named because the talks are confidential.

the averages are all in a line at the current price give or take a couple bucks. 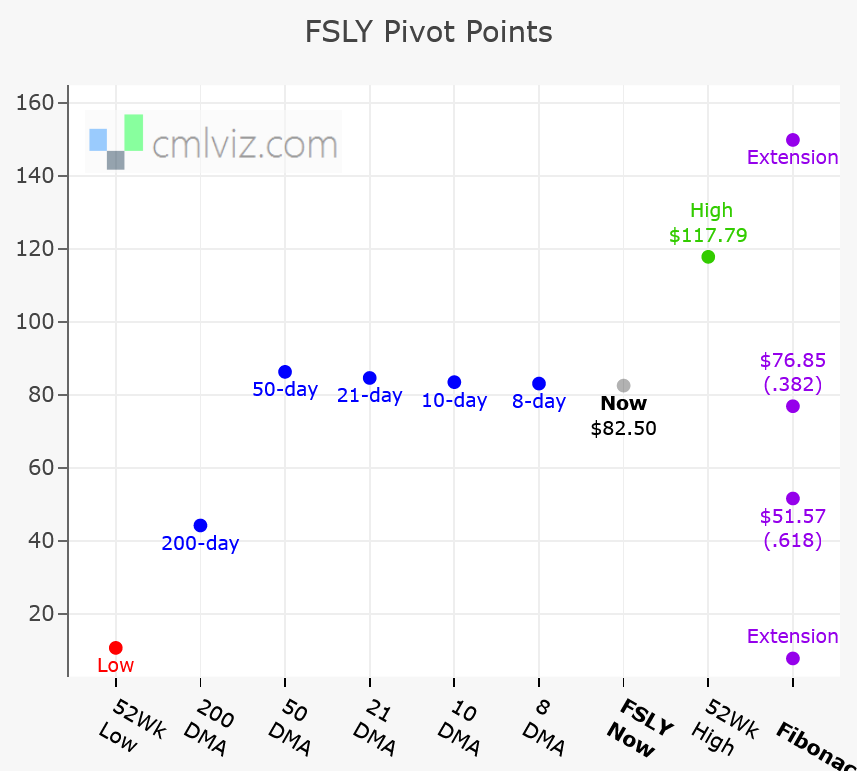 on 9/16/20 at 5:28 pm to cgrand
I've seen this before before a stock broke out again. Is this indicating that it is likely to break up or down soon? My vote is up.


those are fibanacci retracements (above my pay grade)...maybe someone else can explain those better than me

all of major moving averages have converged on the current stock price. the averages "tend" to attract or repel a stock price if plotted on a chart like that. what the current situation means generally is that FSLY has traded in a range long enough for the averages to catch up. it is "coiled" as they say...

on 9/16/20 at 6:12 pm to FLObserver
it just means that its not clear what the obvious high and low resistance is now, thats all. its like when traffic slows down and clumps on on the interstate, the system becomes unstable and anything could happen

i still believe that this is an artificial restriction on the share price due to this tiktok bull shite. here's the latest

quote:
Under the new structure being sought by U.S. officials, all of ByteDance’s assets would go to the new company. Oracle and Walmart Inc. would become investors as well and together these U.S. investors would total more than 50% ownership

quote:
President Trump said the U.S. government had been looking into the possibility of accepting a payment as part of a transaction.

“Amazingly I find that you’re not allowed to do that,” Trump said, referring to the idea of receiving “key money” for broker a deal, which he first proposed last month. “I said, ‘What kind of a thing is this?’ If they’re willing to make big payments to the government, they’re not allowed because there’s no way of doing that from a — there’s no legal path to do that.”

re: stock tip...FSLYPosted by AA7

quote:
“Amazingly I find that you’re not allowed to do that,” Trump said, referring to the idea of receiving “key money” for broker a deal, which he first proposed last month.

Remember when we discussed how ridiculous this request from Trump was a few weeks ago? He is a complete idiot
Back to top
Reply
Replies (1)
OptionsTop
Replies (1)

re: stock tip...FSLYPosted by rintintin

on 9/16/20 at 9:47 pm to cgrand
Fibonacci retracements are based on the Fibonacci sequence made popular by a famed Italian mathematician in the middle ages.

This pattern of numbers was discovered much earlier (like BC earlier) and apparently is found abundantly in nature. It's also the basis for the "golden ratio".

As much as it sounds like voodoo, you will hear big time traders and investors reference fibonacci retracements fairly often.

ETA: CGrand I know you're an Ophir follower. He references them from time to time. Also, if anyone listens to MacroVoices, Eric townsend references them often too.
This post was edited on 9/16 at 9:51 pm
Back to top
Reply
Replies (0)
OptionsTop
Replies (0)

Will get back in after the pullback.
Back to top
Reply
Replies (3)
OptionsTop
Replies (3)

on 9/17/20 at 8:33 am to cgrand
Anyone know why OnTrak is dropping so much? Did I miss something? I have some available cash and may catch another small chunk. Just was right make sure I’m not missing something big.


Or should I buy Fastly? I’m just talking about a couple of shares here but it’s a lot of money to me?

OnTrak had doubled from my entry point of $35 and now at $59.
Back to top
Reply
Replies (0)
OptionsTop
Replies (0)

quote:
Will get back in after the pullback.

pullback to where?
Back to top
Reply
Replies (0)
OptionsTop
Replies (0)

on 9/17/20 at 8:45 am to TDFreak
I was gonna sell some but changed my mind i'm buy more on the dips. I already sold some about a month ago but i'm gonna be buying more going forward. Thinking long term from here.
Back to top
Reply
Replies (0)
OptionsTop
Replies (0)

re: stock tip...FSLYPosted by AA7

quote:
Remember when we discussed how ridiculous this request from Trump was a few weeks ago? He is a complete idiot

Yea, can't wait for Biden dude is a genius.
Back to top
Reply
Replies (1)
OptionsTop
Replies (1)

The Treasury Dept., TikTok owner ByteDance (BDNCE) and Oracle (ORCL -1%) have a tentative agreement on terms of the bid for the social media app's U.S. operations, according to media reports.

Treasury had revisions for the deal, to which the two companies agreed in full, CNBC says.

And while White House Chief of Staff Mark Meadows said President Trump would decide on the deal in 24-36 hours, the new reports are a strong signal of deal approval.

But that's just the U.S. side; China's government has to agree to the transaction, no easy feat.

Walmart (WMT +0.5%) is reportedly coming on board the deal as a minority investor; Oracle is reported to be taking on about 20% of TikTok.
Back to top
Reply
Replies (1)
OptionsTop
Replies (1)