Looks like a family that I would like to have next door.
Back to top
Reply
Replies (0)
OptionsTop
Replies (0)

on 5/10/22 at 12:45 pm to MrLSU
Do you know how great this country would be if all congressmen were like Thomas Maddie!

This guy is a legit conservative!
Back to top
Reply
Replies (2)
OptionsTop
Replies (2)

Posted by CamdenTiger on 5/10/22 at 12:46 pm to Reservoir Ag
Hope they got some clips for Christmas
Back to top
Reply
Replies (0)
OptionsTop
Replies (0)

quote:
Is it me or is that picture photoshopped?

It was beautiful!!!
Back to top
Reply
Replies (0)
OptionsTop
Replies (0)

on 5/10/22 at 12:46 pm to MrLSU
I'm all for gun rights but I'm always weirded out by the family pictures with guns. Like I've never had the desire to take a family Christmas photo in front of the tree with our matching guns.

on 5/10/22 at 12:48 pm to Lsuhoohoo
It’s fun to send to your lefty in-laws or extended family members. I troll mine every chance I get.
Back to top
Reply
Replies (0)
OptionsTop
Replies (0)

to Everyone
Advertisement
Back to top
bbvdd

on 5/10/22 at 12:51 pm to MrLSU
I’m always amazed that Kentucky can give us Thomas Massie and Rand Paul and in the same breath, give us Mitch McConnel.
Back to top
Reply
Replies (0)
OptionsTop
Replies (0)

on 5/10/22 at 12:52 pm to MrLSU
I haven't seen trigger discipline that sharp since the Taliban took Kabul back.
Back to top
Reply
Replies (0)
OptionsTop
Replies (0)

Posted by The Cool No 9

quote:
He's literally the best politician in the United States, at any level.

And walks the walk.

For those who haven't seen it, check out the documentary about his homestead here 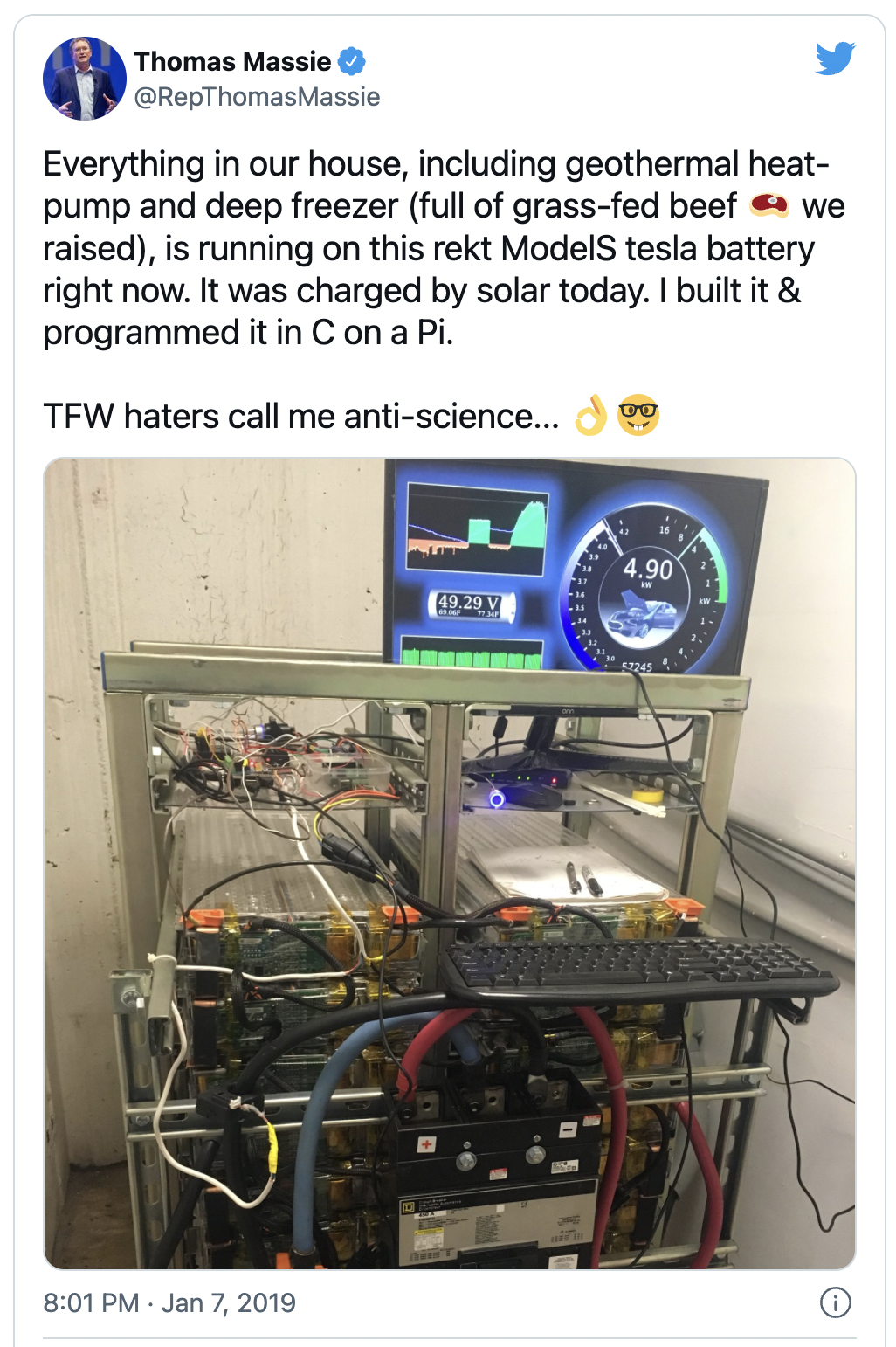 quote:
He's literally the best politician in the United States, at any level. I would take him as president right now.

Has he talked about 2000 mules yet or is it just MTG, Gaetz, Boebert, and Cawthorn? That will tell you who the best is.
Back to top
Reply
Replies (0)
OptionsTop
Replies (0)

on 5/10/22 at 1:21 pm to MrLSU
On another funny note... remember when Trump smeared the frick out of Thomas Massie because Thomas Massie demanded an in person debate on the $2.2 trillion CARES Act?

quote:
“Looks like a third rate Grandstander named @RepThomasMassie, a Congressman from, unfortunately, a truly GREAT State, Kentucky, wants to vote against the new Save Our Workers Bill in Congress. He just wants the publicity. He can’t stop it, only delay, which is both dangerous & costly. Workers & small businesses need money now in order to survive. Virus wasn’t their fault. It is “HELL” dealing with the Dems, had to give up some stupid things in order to get the “big picture” done. 90% GREAT! WIN BACK HOUSE, but throw Massie out of Republican Party!”


This move from Trump really missed the mark completely -- Massie is a Ron Paul like libertarian type, to say "he wants the publicity" is absolute nonsense, and being that type of guy, this smear was never going to work in the first place. It was petty pointless infighting.

quote:
I swore an oath to uphold the constitution, and I take that oath seriously.

In a few moments I will request a vote on the CARES Act which means members of Congress will vote on it by pushing “yes” or “no” or “present.”

The Constitution requires that a quorum of members be present to conduct business in the House. Right now, millions of essential, working-class Americans are still required to go to work during this pandemic such as manufacturing line workers, healthcare professionals, pilots, grocery clerks, cooks/chefs, delivery drivers, auto mechanics, and janitors (to name just a few). Is it too much to ask that the House do its job, just like the Senate did?

I am not delaying the bill like Nancy Pelosi did last week. The bill that was worked on in the Senate late last week was much better before Speaker Pelosi showed up to destroy it and add days and days to the process. This bill should have been voted on much sooner in both the Senate and House and it shouldn’t be stuffed full of Nancy Pelosi’s pork- including $25 million for the Kennedy Center, grants for the National Endowment for the Humanities and Arts, and millions more other measures that have no direct relation to the Coronavirus Pandemic.

That $25 million, for example, should go directly to purchasing test kits. The number one priority of this bill should have been to expand testing availability and creation of tests so that every American, not just the wealthy and privileged, have access to testing. We have shut down the world’s economy without adequate data. Everyone, even those with no symptoms, needs immediate access to a test. This bill creates even more secrecy around a Federal Reserve that still refuses to be audited. It allows the Federal Reserve to make decisions about who gets what, how much money we’ll print. With no transparency. If getting us into $6 trillion more debt doesn’t matter, then why are we not getting $350 trillion more in debt so that we can give a check of $1 million to every person in the country? This stimulus should go straight to the people rather than being funneled through banks and corporations like this bill is doing. 2 trillion divided by 150 million workers is about $13,333.00 per person. That’s much more than the $1,200 per person check authorized by this bill.

Trump wanted to throw Massie out of the GOP for this.