Posted by
Message
The Boat


re: Tropical Storm Isaias - O Canada!Posted by The Boat 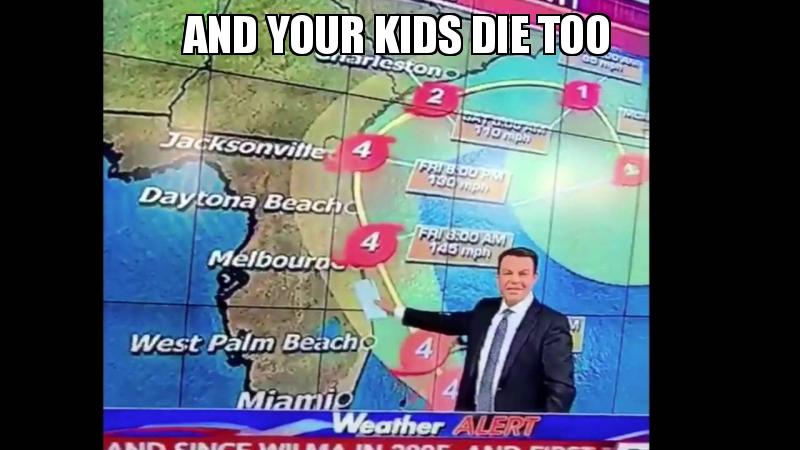 quote:
Eyewall back open. That'll arrest the strengthening for a bit.

It has made repeated attempts to rotate convection upshear but each attempt fails to truly fill in the eyewall.
Back to top
Reply
Replies (1)
OptionsTop
Replies (1)

Am I still ok to go to Krotz Springs in the morning?
Back to top
Reply
Replies (1)
OptionsTop
Replies (1)

on 7/31/20 at 9:43 pm to Bullfrog
If it were me, I'd go ahead and go. I think you'll be ok..
just be careful, and have the TD Hurricane App from your Apple store or Google Play on your device for the latest updates
Back to top
Reply
Replies (1)
OptionsTop
Replies (1)

I'm no nature nazi... but I'm curious what happens with all the dropsondes after they're used?

do they just sink to the bottom of the ocean and become sea trash?

quote:
do they just sink to the bottom of the ocean and become sea trash?


I don't want to be an alarmist, but there is likely one super meteorologicaly sophisticated shark out there somewhere just waiting to frick up somebody's Gulf Shores travel ball weekend.

Isaias has a somewhat asymmetrical appearance on satellite images, with lots of deep convection over the eastern semicircle and not as much over the western part of the circulation. Reports from an Air
Force Hurricane Hunter aircraft indicate that the central pressure has dropped a few mb, and flight-level and SFMR-observed surface
wind observations from the aircraft indicate an intensity of near 70 kt. The hurricane is experiencing some westerly shear, and this is likely to limit intensification. However, some strengthening is
still possible on Saturday. When Isais moves farther north in a couple of days, the shear should cause a gradual weakening trend to begin. The official intensity forecast is about the same as the previous one, and a little above the model consensus.

The hurricane continues moving northwestward at a bit slower pace, or 310/13 kt. The general track forecast philosophy has not changed. Isais should continue to move northwestward on the southwest side of a mid-level ridge through Saturday and begin to turn north-northwestward through a weakness in the ridge on Sunday. Thereafter, a turn toward the north-northeast and northeast with an
increase in forward speed is likely during days 3 to 5. The official track forecast is close to the previous one and also very close to the latest dynamical model consensus.

The hurricane warning has been extended northward along the Florida east coast.
Key Messages:

1. Hurricane conditions and dangerous storm surge are expected in portions of the Bahamas through Saturday, and Hurricane Warnings are in effect.

2. Hurricane conditions are expected along portions of the Florida east coast late Saturday and Saturday night, and a Hurricane Warning has been issued. Preparations to protect life and property should
be rushed to completion.

3. Dangerous storm surge is possible along the Florida east coast from Jupiter Inlet to Ponte Vedra Beach where water rises of 2 to 4 feet above ground level are possible along the immediate coastline
and adjacent waterways. Residents in these areas should follow advice given by local emergency officials.

4. Isaias will produce heavy rains and potentially life-threatening flash and urban flooding, especially in low-lying and poorly drained areas, across South to east-Central Florida, and across the Carolinas to the mid Atlantic. Isolated minor river flooding is possible across the eastern Carolinas and into Virginia early next week.

5. There is a risk of impacts from winds, heavy rainfall, and storm surge spreading along much of the the U.S. east coast through early next week, and interests there should monitor the progress of Isaias
and updates to the forecast.
This post was edited on 7/31 at 10:00 pm
Back to top
Reply
Replies (1)
OptionsTop
Replies (1)

on 7/31/20 at 10:18 pm to Roll Tide Ravens
TWC's Dave Malkoff with a completely disingenuous part to his story tonight about hurricane preps and the coronavirus... including vacationers

hey Dave... Florida has 15.5 million more people in it than Maryland... of course Florida is going to have exponentially more cases
This post was edited on 7/31 at 10:20 pm
Back to top
Reply
Replies (2)
OptionsTop
Replies (2)

quote:
Hurricane #Isaias Advisory 16A: Isaias Gets a Little Stronger. Expected to Approach the Southeast Coast of Florida Later Today And Sunday. 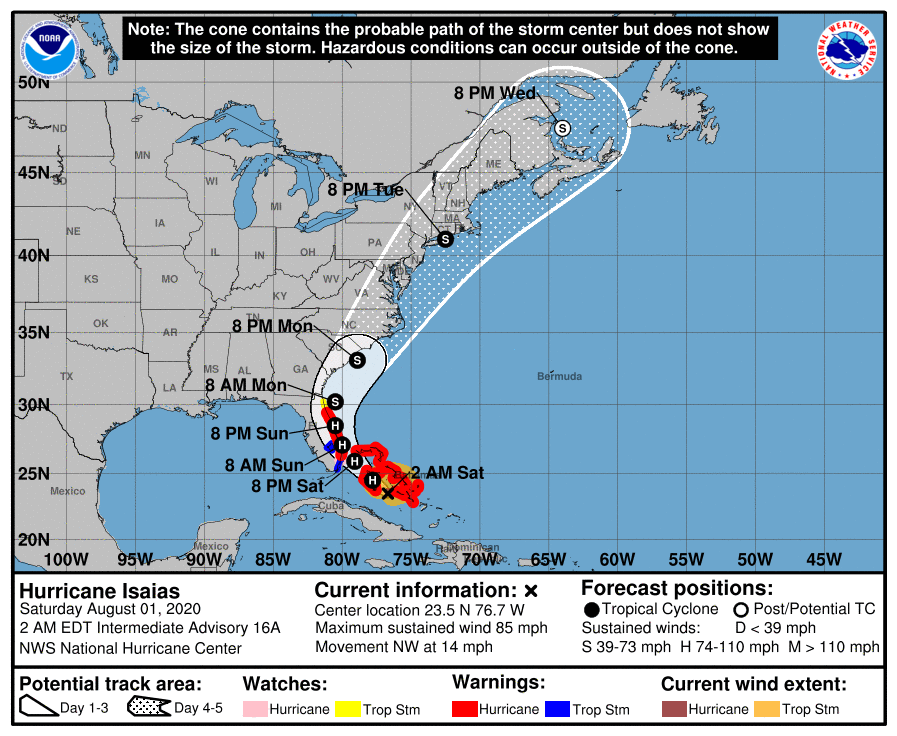 on 8/1/20 at 4:12 am to Bobby OG Johnson
Looks like this storm is really about to go poof from its satellite appearance.- it’s the ever shrinking tropical blob.
Back to top
Reply
Replies (1)
OptionsTop
Replies (1)

quote:
Looks like this storm is really about to go poof from its satellite appearance.- it’s the ever shrinking tropical blob.

on 8/1/20 at 7:35 am to rds dc
Isaiahs looks quite pitiful today. Unless things change in a very short amount of time, this does not look to be much of a threat to FL, especially any inland areas. Here in Orlando I don’t think we’ll have any effects to speak of.
Back to top
Reply
Replies (2)
OptionsTop
Replies (2)

on 8/1/20 at 7:41 am to otowntiger
I think by around noon or so today we may know if this is even a threat. Right now looks like a no.
Back to top
Reply
Replies (0)
OptionsTop
Replies (0)

on 8/1/20 at 8:08 am to rt3
The Weather Channel actively using the term “covidcane” is disgusting. While it’s true that COVID creates additional issues when dealing with a hurricane, this is just another example of TWC creating more hysteria and hyperbole for views/clicks.

Too bad there is no good alternative to TWC. The Accuweather channel sucks. WeatherNation was okay, but it’s not on DirecTV anymore.
This post was edited on 8/1 at 8:12 am
Back to top
Reply
Replies (1)
OptionsTop
Replies (1)

quote:
Isaiahs looks quite pitiful today. Unless things change in a very short amount of time, this does not look to be much of a threat to FL, especially any inland areas. Here in Orlando I don’t think we’ll have any effects to speak of.

Recon is pinning the center on the western edge of that small batch of storms. It tried to close off an eyewall yesterday and could never get it done. The drops from upper air recon last night showed some very dry air to the WSW of the system and now it looks like dry air is getting the best of the system.
Back to top
Reply
Replies (2)
OptionsTop
Replies (2)

re: Tropical Storm Isaias - O Canada!Posted by Bobby OG Johnson on 8/1/20 at 8:33 am to rds dc
Case of the struggles this morning