on 1/14/22 at 4:32 pm to LegendInMyMind
If I'm in Memphis tonight and promised 2 toddlers snow tomorrow/Sunday, where do I go?
Back to top
Reply
Replies (2)
OptionsTop
Replies (2)

re: Saturday night/Sunday morning North Louisiana light snow eventPosted by LegendInMyMind on 1/14/22 at 5:03 pm to GeauxBlonde

quote:
If I'm in Memphis tonight and promised 2 toddlers snow tomorrow/Sunday, where do I go?


With a little luck, just out in the yard. If not, dress them warm and point them in the direction of South and they'll find it pretty quick.

quote:
It might not be a 100% fact, but most of the time when it snows in Baton Rouge it is 31 degrees. Been here and seen dat.

What does it mean?
Back to top
Reply
Replies (1)
OptionsTop
Replies (1)

quote:
if that doesnt deliver flurries to the Northshore Id be very surprised.

Keep a eye on it for us. Having read your posts for years I trust your opinions more than these clowns on TV
Back to top
Reply
Replies (0)
OptionsTop
Replies (0)

quote:
most of the time when it snows in Baton Rouge it is 31 degrees

Fun weather tip...it doesn't need to be freezing on the surface to snow. The mid and upper levels of the atmosphere do need to be at or below 32 degrees.

If memory serves me correct when it snowed back in 2017. It was just above freezing in the bayou area. Now in order for it to stick to the ground, it needs to dip below 32 in order for it to stay. Otherwise, it is melting like a slushie. That day I believe the temperatures were around 34 or 35 and it was snowing pretty hard. I remember chasing the snow and the US 90 bridges icing over. I had to take the scenic drive on Hwy 182 to get to Morgan City that day.
This post was edited on 1/14 at 7:27 pm
Back to top
Reply
Replies (1)
OptionsTop
Replies (1)

on 1/14/22 at 7:31 pm to LegendInMyMind
What about north Madison county Alabama?
I never bother with news stations when I can come here.
Back to top
Reply
Replies (1)
OptionsTop
Replies (1)

quote:
Fun weather tip...it doesn't need to be freezing on the surface to snow. The mid and upper levels of the atmosphere do need to be at or below 32 degrees.

The big thing is having the surface airmass not be fully saturated, so there's room for the snow falling into it to evaporate some. This cools it off, and keeps it below freezing and snow despite the environment being slightly above freezing.

*ETA: You're not wrong at all, of course, just adding some additional context.
This post was edited on 1/14 at 7:42 pm
Back to top
Reply
Replies (0)
OptionsTop
Replies (0)

re: Saturday night/Sunday morning North Louisiana light snow eventPosted by LegendInMyMind on 1/14/22 at 7:46 pm to footswitch


NWS Huntsville isn't big on much accumulation for most of N. AL. The Eastern counties are in the Winter Storm Watch, though. They're calling for less than an inch for everyone else. I wouldn't be surprised if we beat that, though, but not what we saw last time. 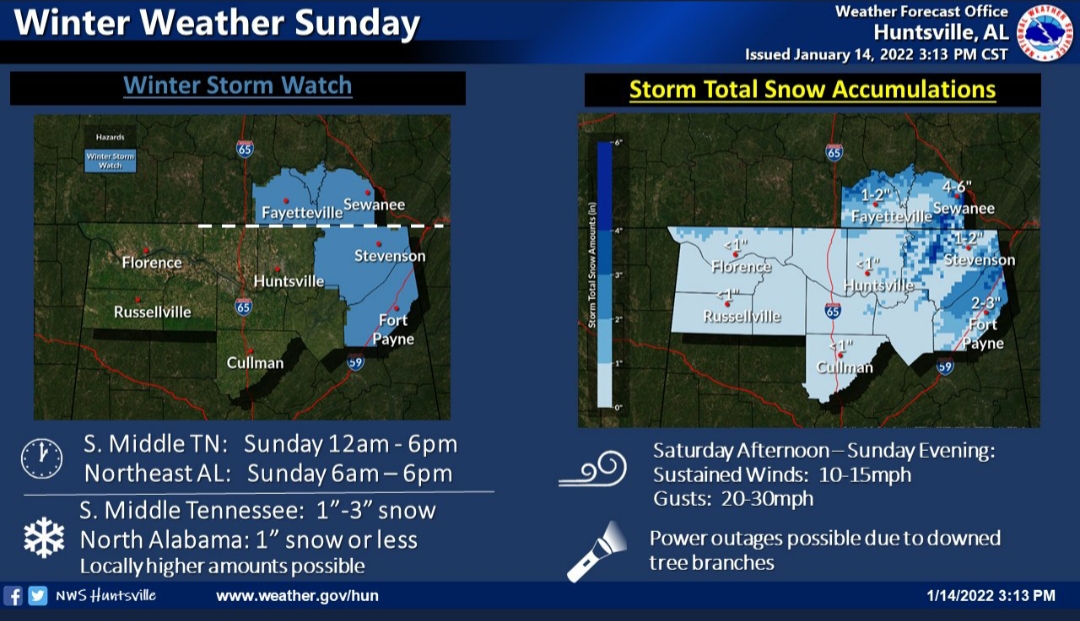 Madison county is kind of surrounded, but there are reasons for that.
Back to top
Reply
Replies (1)
OptionsTop
Replies (1)

re: Saturday night/Sunday morning North Louisiana light snow eventPosted by LegendInMyMind on 1/14/22 at 9:21 pm to footswitch

quote:
Area Forecast Discussion National Weather Service New Orleans LA 938 PM CST Fri Jan 14 2022 .EVENING UPDATE...No adjustments made to tonight`s forecast but we did adjust tomorrow and tomorrow nights forecast. Timing is still similar with tomorrow`s activity. First round of convection appears to be associated with waa possibly a warm front sliding north. One thing to watch will be how far east that can move and how fast. If that activity is slower to move out or is anchored closer to the coast then we will struggle to recover and the amount of convection that will be associated with the cold front tomorrow afternoon will be far lower than currently forecasting. On the other hand of that activity moves to the east and northeast a little faster it will allow for better destabilization and perhaps a few strong storms...can`t rule out one or two severe but the most likely risk of strong/severe weather will be quick weak tornadoes early in the afternoon. These could very well develop on showers, so yeah no lighting with some of these is possible. The best directional shear will be from morning and into the early afternoon but winds quickly become unidirectional mid afternoon and ahead of the cold front. As for Winter Weather, the key will be the path of the mid level low. The trend had been a little south so we shall see if that continues. If the low can get a touch farther south then light snow would be possible in southwest MS, not just flurries. Flurries do look likely in southwest MS and the adjacent LA parishes but could even be possible down to I-12. The next thing to watch which we wont see till tomorrow evening will be how much moisture can wrap around it. All indications suggest there could be a rather decent amount of moisture wrapping around, probably due to what looks like an impressive TROWAL ahead of it across MS and AL. We did bring flurries a little farther south with this update but holding off on any real accumulating snow at this time. Grids and zones will be out shortly. One thing to mention...confidence is low and there is a chance that Winter weather could over preform. The key again is that wrap around moisture. Numerous forecast soundings over the last 12-18 hours has indicated there could be a brief window of rather decent waa/lift in the dendritic zone. At the same time the column looks pretty well saturated from the sfc and perhaps all the way to h7. If, and this is a big IF, that happens we could be see a window of moderate snow possibly leading to some light accumulations. If that happens it would most likely be in southwest MS. At this time the potential for any meaningful snow is rather low in SELA and coastal MS but southwest MS will need to be monitored. This could make travel along I-55 from the LA/MS border north through the state rather dangerous to drive on. /CAB/

re: Saturday night/Sunday morning North Louisiana light snow eventPosted by LegendInMyMind on 1/14/22 at 10:25 pm to DVinBR
I posted these in the other thread: 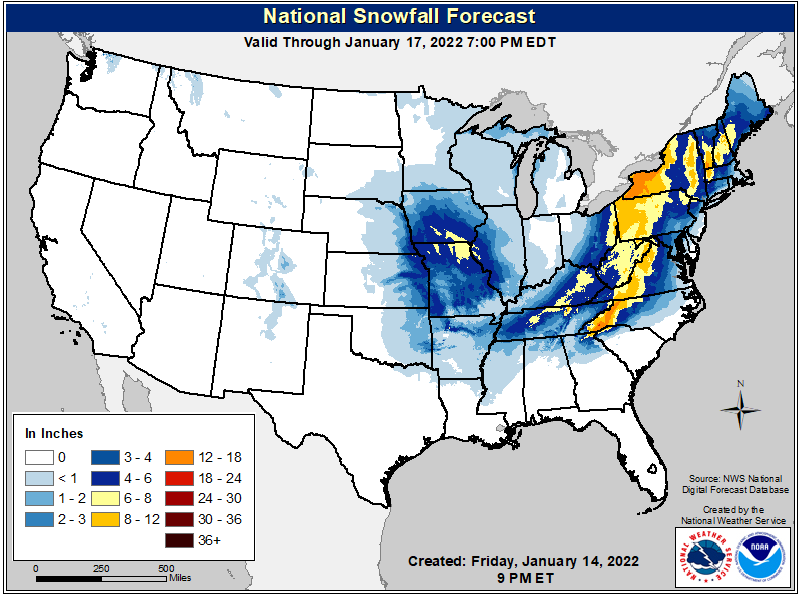 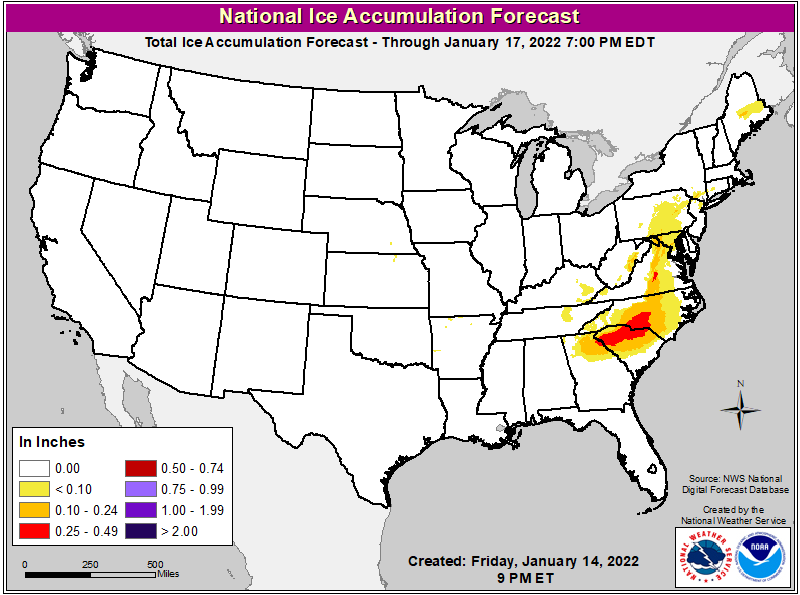 According to this outlook, seems like they could see some snow. Could be worth the drive
Back to top
Reply
Replies (1)
OptionsTop
Replies (1)

on 1/14/22 at 11:13 pm to trussthetruzz
A cold night at the camp with a fire is enough for me. Add in the possibility of snow and that’s a definite drive up.
Back to top
Reply
Replies (0)
OptionsTop
Replies (0)

re: Saturday night/Sunday morning North Louisiana light snow eventPosted by LegendInMyMind on 1/15/22 at 12:09 am to East Coast Band
For anyone who may be interested, a massive volcanic eruption just happened near Tonga and a tsunami warning is out. It erupted earlier today as well. Some just unreal satellite and radar imagery has been posted on Twitter in the last half hour. I probably won't start a thread on it, but it is something.

Somewhere around 10,000 lightning strikes an hour earlier today in the tower.

ETA: American Samoa also just went under a Hazardous Tsunami Warning.
This post was edited on 1/15 at 12:11 am
Back to top
Reply
Replies (2)
OptionsTop
Replies (2)