0
It's time. Let's get the new season started.

Vettel moves to Aston Martin, Ricciardo to McLaren, Perez to Red Bull and Sainz to Ferrari. Haas has a whole new lineup in Mick Schumacher and Nikita Mazepin. AlphaTauri brings in Yuki Tsunoda to replace Kvyat. Last but certainly not least, Fernando Alonso returns to F1 in the Alpine team.

This year there are only 3 days of testing as opposed to 6-8 days. Also the testing has been moved to Bahrain from Barcelona. I like the shorter test time. Should throw a spanner into the works to some degree. The teams will still be trying to figure out their cars a few races into the season.

Also we have a 23(!) race calendar this year. They will start at Bahrain two weeks after test week. Australia has been moved back to late in the year, there are new venues in Saudi Arabia (subject to circuit homologation) and at Zandvoort. Imola is back on the calendar again. No German GP.

Also the Hanoi street race from last year has been dropped from this year's calendar (so far).

Mercedes
Season launch
More unveiling
What are they hiding?

Alpine (formerly Renault)
Alpine reveal (best livery so far, IMO)
Alpine presents the A521
Inside the A521
Shakedown run
Inside look 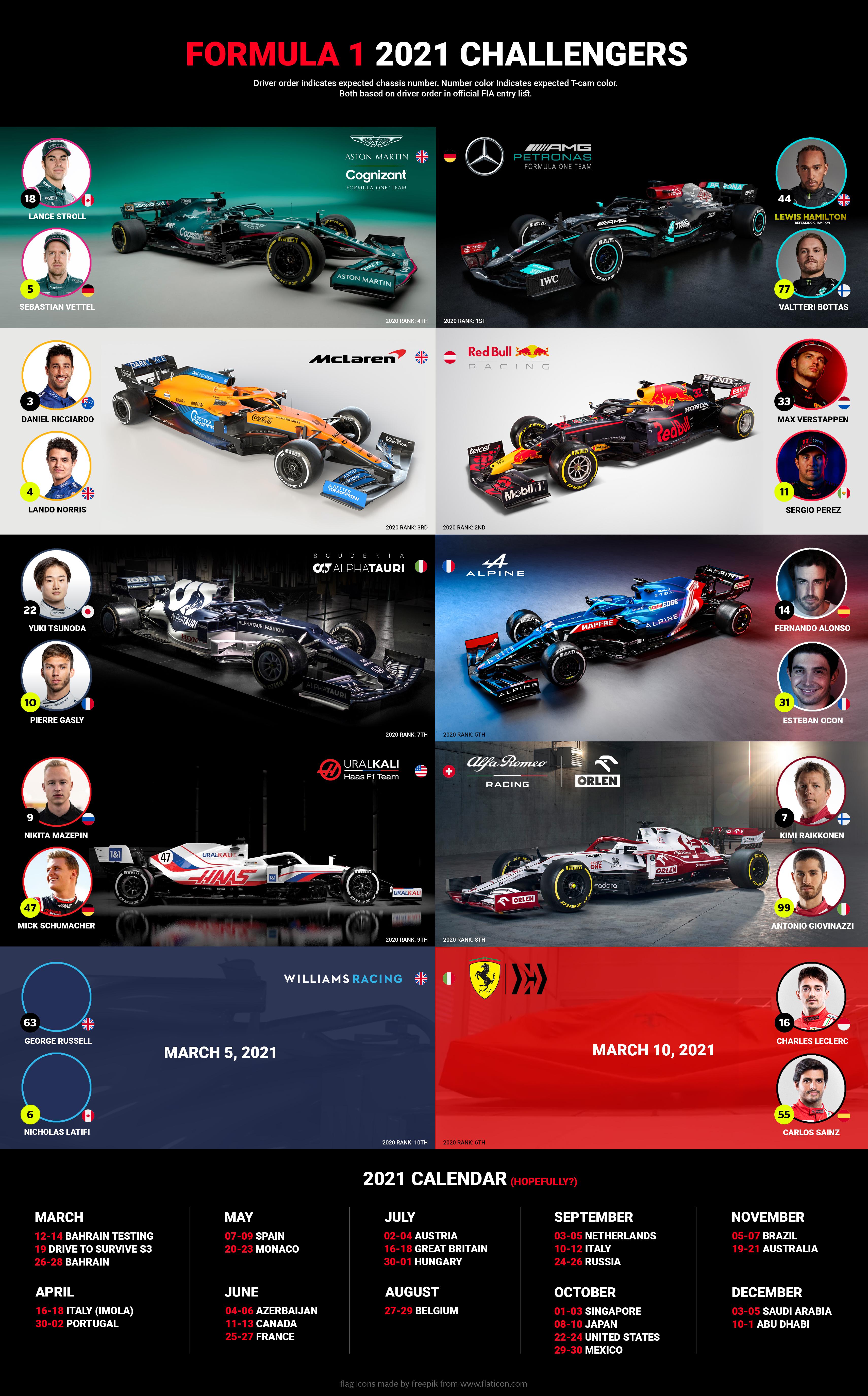 on 2/17/21 at 5:58 pm to VABuckeye
I don’t contribute much but read the thread religiously.
Back to top
Reply
Replies (0)
OptionsTop
Replies (0)

But i do think that the 2- say 6 pack will be extremely competitive.

Also, does William finally claw their way out of last? Haas definitely has their work cut out to keep that from happening.
Back to top
Reply
Replies (1)
OptionsTop
Replies (1)

re: Formula 1 2021 Season ThreadPosted by theone

Agree on disliking rule 10 in your list. I liked the tire options and letting teams go for it not sure the advantages of changing it, assume costs. In general, I like seeing the teams have as many options as possible.
This post was edited on 2/17 at 7:05 pm
Back to top
Reply
Replies (1)
OptionsTop
Replies (1)

re: Formula 1 2021 Season ThreadPosted by theone

to Everyone
Advertisement
Back to top
MountainTiger

quote:
not sure the advantages of changing it, assume costs


It had to have been something Pirelli wanted. The other part of that is that Pirelli only has to notify the teams of which compounds will be on offer 2 weeks before the race. It used to be 9 weeks for European events and 15 weeks for the fly-away races. I think that change has more to do with Covid than anything else in case the schedule starts getting rearranged mid-season.
This post was edited on 2/17 at 7:31 pm
Back to top
Reply
Replies (2)
OptionsTop
Replies (2)

re: Formula 1 2021 Season ThreadPosted by Captain Crackysack on 2/17/21 at 9:11 pm to MountainTiger
Hopefully USGP will be full tilt by oct 24th. Might have to take a road trip
Back to top
Reply
Replies (1)
OptionsTop
Replies (1)

re: Formula 1 2021 Season ThreadPosted by Them

If Schumacher does anything even resembling living up to the family name, it’ll be a very good season.
Back to top
Reply
Replies (0)
OptionsTop
Replies (0)

re: Formula 1 2021 Season ThreadPosted by TheOfficial

on 2/17/21 at 10:30 pm to MountainTiger
Hoping McLaren can take the next step this year, but not sure since they had to use development tokens on fitting the merc engine.

Need lots of wet races this year, the only thing that slows Merc down

on 2/18/21 at 12:35 am to MountainTiger
This is legit the most excited i’ve been for any sport to start back since i can remember.

Really hope McLaren has adapted to the new Mercedes PU and don’t fall behind.

I’m half Australian, so definitely love seeing my boy Danny Ricc with the team.

The wife (no pics) is Thai and we really like Alex Albon as well. Shame he’s been relegated to reserve driver, but i honestly believe unless RB get their shite together with the suspension and make the car more stable, theres a decent chance that Sergio will be putting in similar results. I truly believe the RB16’s shitty stability showed how brilliant Of a driver Max is, moreso than it was an indictment of Alex. You could see flashes of brilliance in 2019 when the car was much more stable.

on 2/18/21 at 1:38 am to MountainTiger
Pretty sure the TBC date has been confirmed to be Portimao.
Back to top
Reply
Replies (1)
OptionsTop
Replies (1)