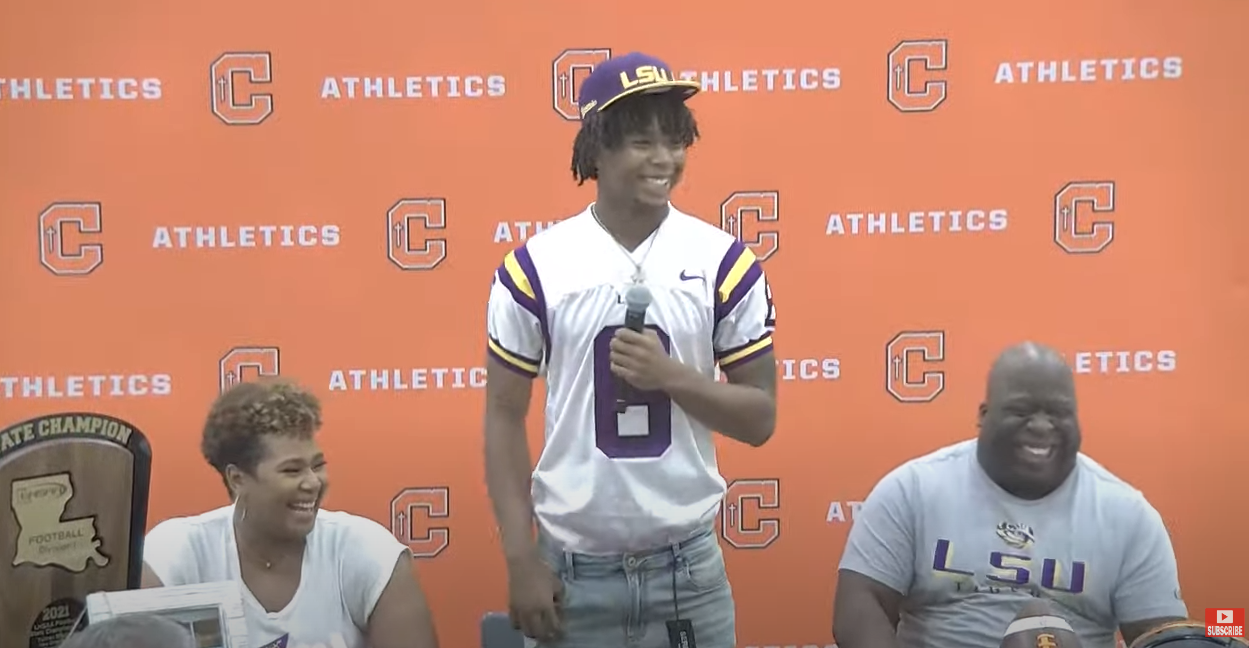 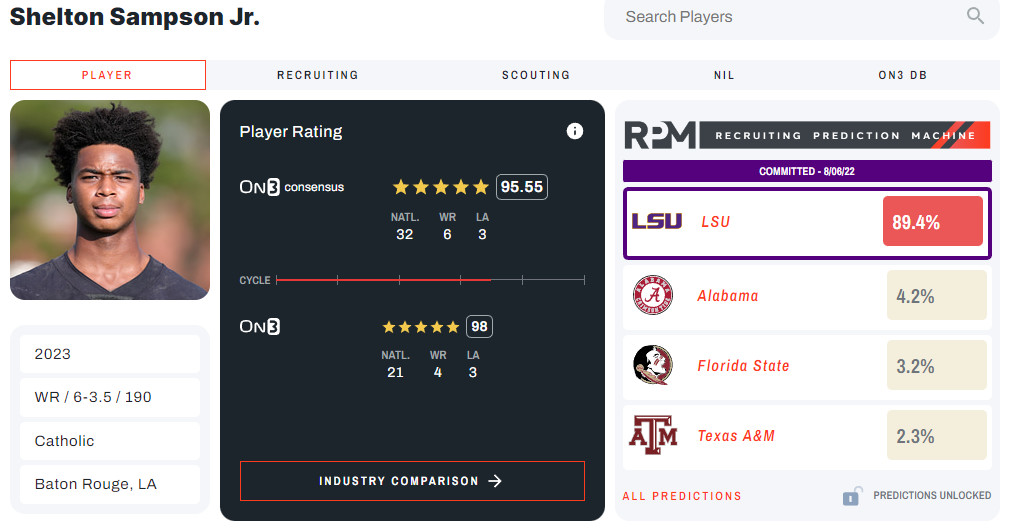 quote:
Big-play wide receiver with one of the best combinations of vertical speed and catch radius in the 2023 cycle. Clocked a sub 4.4-second 40-yard dash at 6-foot-4 prior to his junior season. Uses that speed to create separation on downfield routes with regularity. Pairs the long speed with advanced ball skills. Shows the ability to leap over defenders to high-point the ball in contested situations. Comes down with some fantastic one-handed and diving grabs. A younger prospect for the cycle who continues to show improvement over time.

Posted by ForTheWin81 on 8/6/22 at 12:40 pm to Cadello
Will Sampson and Jackson be enough tomove us up? It doesn't matter much knowing we could have as many as 4 more this month. Would be awesome having 22-23 solid guys to start the season
Back to top
Reply
Replies (1)
OptionsTop
Replies (1)

to Everyone
Advertisement
Back to top
sicboy

quote:
Shame after he commits he will be a 3 star.

quote:
A&M pu$hing him to delay commitment on Monday


If true, for what reason you think? No matter what the reason is, my hatred for A&M is equal to Alabama.
Back to top
Reply
Replies (1)
OptionsTop
Replies (1)

Posted by The Dozer

So is Devonta Smith…
A Louisiana baw who went to Bama.
This post was edited on 8/6 at 1:12 pm
Back to top
Reply
Replies (1)
OptionsTop
Replies (1)

on 8/6/22 at 1:41 pm to rmnldr
Shelton committing jumps us all the way from 10th class overall to 7th class overall. If we can land the 5 Louisiana guys this month we could be flirting around the top 2-4 classes. Toviano, Harbor, and Chester. If we can somehow start throwing them into the mix, we can still finish top 4-5 on the cycle. I’ll say we finish 6 or 7 as things stand now.
Back to top
Reply
Replies (1)
OptionsTop
Replies (1)


Build: Sampson is a long and lean, well proportioned 190lbs. Arms are long as expected from a 6’3” athlete, with developing definition. Lower half has some bubble & thickness to it. Built much like an Olympic sprinter, this is the area where Sampson carries much of his weight. Sampson just made 17 in April. His body is still maturing, and by the time he hits 20-21, I could see him ending in that 210-215 range.


Strengths: First word that comes to mind regarding Sampson is vertical. Sampson is going to jump over you vertically, and run by you vertically. Sampson hand timed at 4.35 as a freshmen during Catholic High’s pro day.

The most impressive thing to me about his speed is his acceleration, where you usually see smaller, more compact athletes thrive. Sampson churns out short, powerful steps, and is at top end speed after just a few yards. Impressive for a longer athlete. Sampson’s long speed is good as well, with room to grow. As he matures, will likely never be ran down even by SEC athletes.

Finally, Shelton shows great timing & leverage on fade throws & jump balls. Sampson high points the ball better than any lsu WR I’ve looked at since Terrace Marshall. Aided by a pair of very strong hands, you do not see Sampson double catch balls at all, even in 7 on 7.


Weaknesses: I hate even writing about weaknesses for high school WRs, because so much of what hampers them is QB play & play calling. I love comparing guys, and the first guy I thought of was AJ Green. So I dug around YouTube for AJ Green’s HS highlights, and found a 15yr old reel dubbed to some Nelly music. Grrgggh….. disappointingly enough, Shelton Sampson is not like HS AJ Green. They are running different trees, and doing different things after the catch. AJ Green, I do apologize sir. This is fine. Live to see another day. Sampson is here to make his own name.

Right now, Sampson is capped as a linear route runner, mostly running deep post routes on film. In 7 on 7 you see a little more variety on some slants & crossers. Still, running in a straight line, and not a ton of variety outside of that. Not that he cannot do that, but that is just how he is being used now, and it works. His feet are quick and he moves well, but I want to see more ankle-bend.

Sampson shows ability after catch on some shorter passes, but he mostly runs by less-athletic high school players. And there is a world where guys make a lot of money never going to the middle of the field. But I am curious as to how he performs after the catch in traffic, if at all. His body is not built for that yet, but should be in a few years.


Summary: Shelton would be a humongous slam dunk for the in-state recruiting momentum. Shelton provides LSU with a long, fast, outside vertical WR that everyone offense needs. Once full developed, I see Sampson as a Martavis Bryant / Robert Meachem type WR in this offense. He’s going to get 15-18ypg catching passes from Nussmeier or Walker Howard. He’s going to catch 9-12td in his prime. He is going to stretch the field and open up a ton of yardage for other guys in Brian Kelly’s offense. I can’t wait to see what his Sr year brings.
Back to top
Reply
Replies (1)
OptionsTop
Replies (1)

on 8/6/22 at 1:48 pm to Dragula
I’m sure they are. I hope they all enjoyed getting what they’ve gotten out of Louisiana bc now that Kelly and staff are getting settled and repairing the damage from Orgerons crew, the fence will be back up
Back to top
Reply
Replies (1)
OptionsTop
Replies (1)