Possible fix for those burned by Scott’s rotary spreaders

0
UPDATE: it worked flawlessly. No granules hitting the wheels and it was throwing an even spread out. I may decrease the setting by one click because theoretically a smaller wheel would mean more revolutions and more product per square foot

It’s well known that Scott’s spreaders are a shite design. The engineers must have been drunk when they decided to make the wheels higher than the level of the rotating spreader.

This causes the pellets to hit the inside of the wheels, which have hollow cavities, and collect significantly more granules in the space between the two wheels. This causes stripes in your grass with fertilizer and generally does an awful job of spreading the granules.

So before I tossed this piece of shite in the trash I decided to try to destroy it first. I took a oscillating tool to the wheels and cut about an inch off of each wheel. The wheels easily snap off and on. 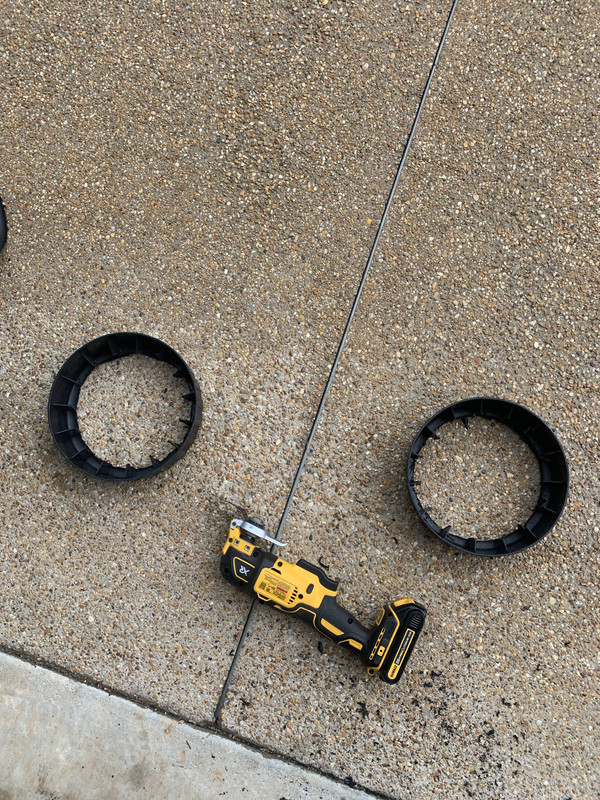 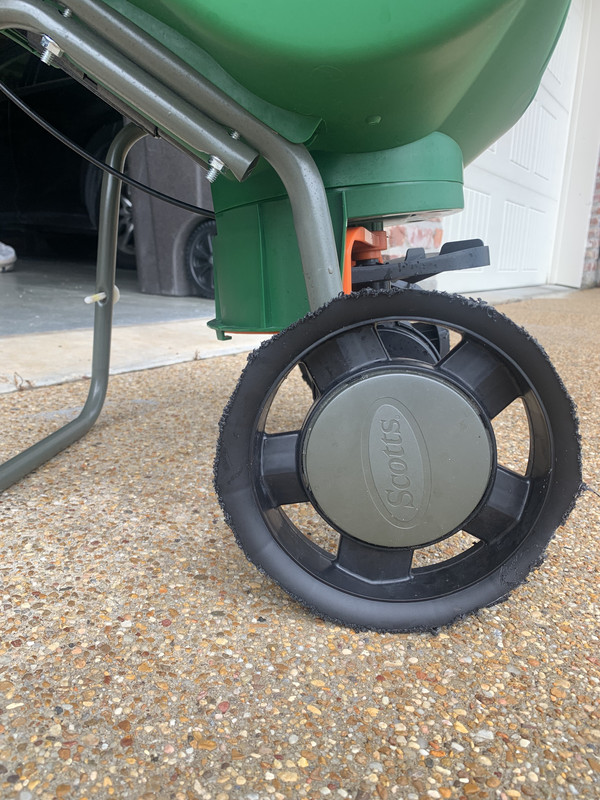 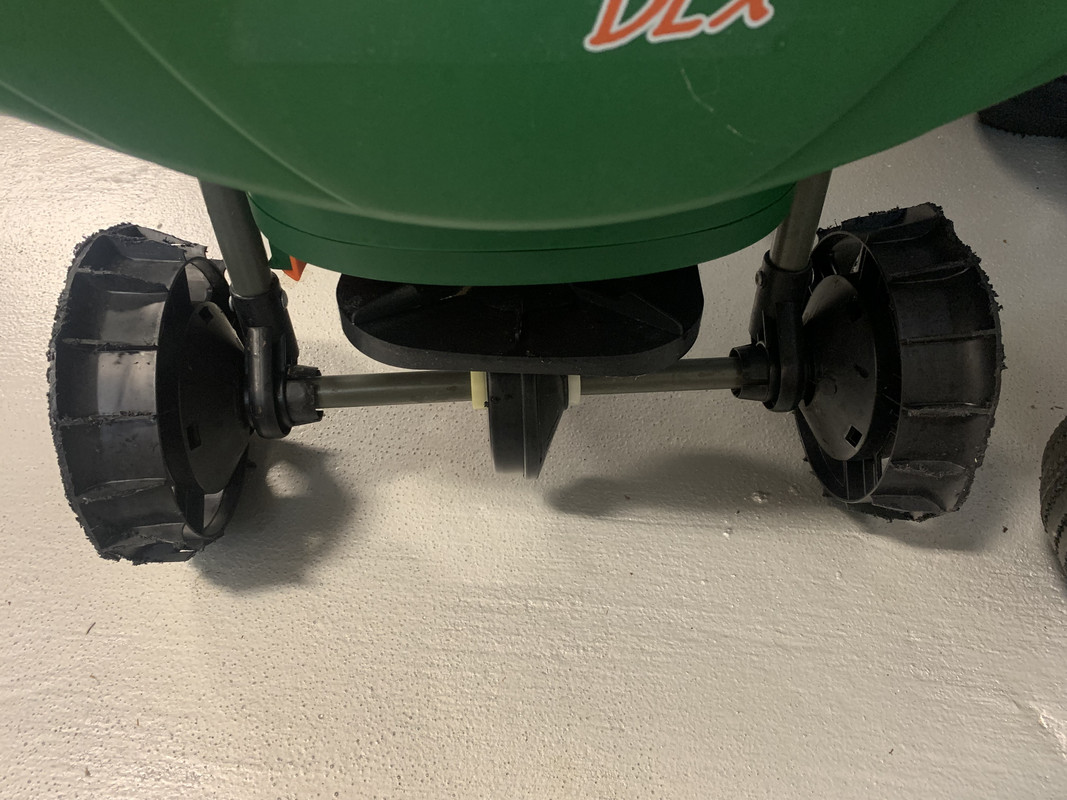 This did two things. First, it lowers the height of the wheels so the ejected granules don’t hit them. And it removes the cavities inside the wheel where granules would collect.

I think it will also give the wheels more traction

I haven’t tried it yet, but I’ll update this post after I do. I’m pretty confident this will solve the issue.
This post was edited on 7/4 at 6:56 pm
Back to top
Reply
Replies (6)
OptionsTop
Replies (6)

Posted by TigerVizz87 on 7/2/22 at 4:44 pm to Knuckle Checker
Good way to kill an afternoon but throw that shite in the trash and go get a Scott’s Elite
Back to top
Reply
Replies (1)
OptionsTop
Replies (1)

quote:
throw that shite in the trash and go get a Scott’s Elite

quote:
Can the wheels go on backwards?

The Elite has been perfect for me since I got it, and I sling a lot of shite. I spray wee control and Iron, but I go through 36 bags of Milorganite a year on my 2/3 acre and the Elite spreader has never left any signs of trails or bunches.
Back to top
Reply
Replies (1)
OptionsTop
Replies (1)

Posted by ronk on 7/2/22 at 9:28 pm to Knuckle Checker
I’ll let you in on a secret. When’s Scotts LawnService was in business they didn’t use a Scott’s spreader. They used Andersons.
Back to top
Reply
Replies (0)
OptionsTop
Replies (0)

to Everyone
Advertisement
Back to top
tiggerfan02 2021

quote:
Don’t need all that. I walk around the yard throwing it

Why don't you poors just pay someone to do fertilization/weed control?
I did the math a few years ago and figured out I was only saving a hundred bucks or so a year doing it myself, plus dealing with the hassle.
Not worth it IMHO.
Back to top
Reply
Replies (2)
OptionsTop
Replies (2)

The poors thing was a joke, and I used to deal with it myself until I did the math and figured in the amount of labor time I had involved. To me it wasn't worth the small amount of $$$ savings, and if I have a problem all I have to do is pick up the phone and they come back to re-treat free (which I have only had to do once in 9 years).
But if you enjoy it (which I did not) then have at it.
Back to top
Reply
Replies (1)
OptionsTop
Replies (1)

If it’s cheap I’m sure they are spreading crap. Maybe your lawn was in good shape and doesn’t need much of anything.

I don’t trust these companies to put down quality products and do it right. If you buy your product online and good rates I don’t see how you aren’t saving significant money.

A bottle of Celsius is $100 and will probably last 10 years. If you are on this board I imagine it’s not because you can’t afford lawn service, it’s because you care enough to want to do it right.
This post was edited on 7/3 at 11:08 am
Back to top
Reply
Replies (0)
OptionsTop
Replies (0)

quote:
Why don't you poors just pay someone to do fertilization/weed control?
I did the math a few years ago and figured out I was only saving a hundred bucks or so a year doing it myself, plus dealing with the hassle.
Not worth it IMHO.

What you are missing is some people view yard/garden work like a hobby. It isn't about the money. Yard work isn't that way for me but I understand it.

We had a couple over to eat about 6 months ago at the camp and I had just finished a walnut buffet, media center,and coffee table built to my wife's aesthetic vision. Kinda Scandanavian inspired with SS hardware. As they fawned over it at some point, they ask about the cost of the materials and I noted it was about $1900 for the three pieces. They couldn't understand why I didn't just go buy them at Ashley etc for much less. They couldn't understand it wasn't about cost, it is a hobby to me and we have furniture you simply can't buy. I imagine they would have thought I was full-on crazy if they were aware of my 1200 sq ft dedicated woodshop with a conservative $120k in machines, tools and tooling.

The bottom line some people view lawn maintenance as a hobby, they enjoy it and take pride in the results. There are also others that are simply frugal and are using the money for other things they enjoy.
Back to top
Reply
Replies (1)
OptionsTop
Replies (1)

on 7/5/22 at 12:11 pm to Knuckle Checker
Neighbor had that same issue with his; we filled it with spray foam instead of hacking it up and haven't had any issues since.
Back to top
Reply
Replies (0)
OptionsTop
Replies (0)

Mingo was showing up too often, huh?
Back to top
Reply
Replies (1)
OptionsTop
Replies (1)