As long as lenders aren't requiring flood for X zones, lots more people are going to go without flood insurance at those premiums.
Back to top
Reply
Replies (1)
OptionsTop
Replies (1)


Due to political backlash, they have delayed this rating system/policy change through Biggert Waters legislation for nearly a decade. Looks like FEMA and NFIP have successfully pushed for covering their losses after years of disaster claim payouts. Politics aside, the NFIP operates in the red. This was coming, just a matter of when.
Back to top
Reply
Replies (1)
OptionsTop
Replies (1)

on 9/15/21 at 10:43 am to lafloodcert
I was always told that if you carry flood insurance when you don't need it, you are granfathered in at that price even if they rezone you.
Back to top
Reply
Replies (0)
OptionsTop
Replies (0)

2
man in the stadium

re: Risk 2.0 - FEMA Finnda Eat!Posted by man in the stadium

Give me a break. Fema has talked about this for years and the only reason it didn't happen sooner is Congress keeps delaying it. This isn't some smoke and mirrors conspiracy. The National Flood Insurance Program is broken because people do not pay the true actuarial cost reflective of the risk for the areas they choose to live in. The NFIP runs a multi-billion dollar deficit every year because the taxpayers of America bail out its losses. Taxpayers are bailing out coastal homeowners for building stupid things in stupid places. Local examples include slab-on-grade homes in Lafitte and Braithewait...stupid. Nationally, we have people building on the seaward side of dunes up and down the east coast, Dauphin Island, etc. etc...stupid. This is the story of the three little pigs, except the pigs who built their houses of straw and sticks not only are astonished when they get blown down, but then turn around and expect the other pigs to pay for reconstruction in the same stupid manner in the same stupid location. What happened to personal responsibility? If we want to get into this from an equity standpoint, the NFIP tends to benefit mostly those who are already affluent, since the total value of losses each year is concentrated in assets along coasts, which are often more high-dollar real estate and second homes.

From an analytical perspective, it may actually help many areas in Louisiana, since there will be more accounting of natural features and non-federal flood protection infrastructure in the Flood Insurance Rate Map process, all of which FEMA currently does a dog shite job of accounting for when modeling and making flood maps.

So, in summary, Risk Rating 2.0 encourages more personal responsibility. Think before you build. Pay what you owe in a free market. Oddly, for the current political climate, this is a pretty conservative, responsible, American thing to do as a nation.

Risk Rating 2.0 will have people pay what it truly costs to ensure risky decisions, plain and simple.
Back to top
Reply
Replies (1)
OptionsTop
Replies (1)

quote:
Politics aside, the NFIP operates in the red

Outside of 3 hurricanes that were major flood events, NFIP is fairly solvent on its own. All they're doing with this is discouraging people in lower risk areas from buying flood insurance at all. So now your risk pool is going to be much more highly concentrated in the areas most prone to flooding. 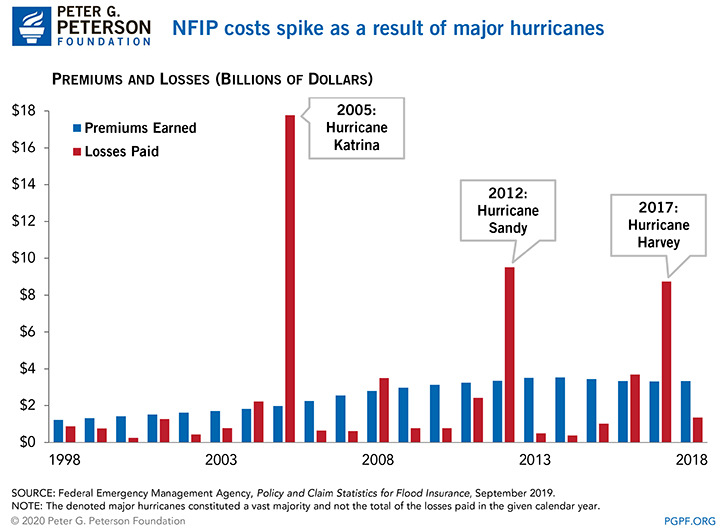 ETA: really, its outside of Katrina the NFIP should be solvent. 2006-2011 years should've been enough to build reserves that would've covered Sandy and 2013-16 surplus should've covered most of Harvey losses.
This post was edited on 9/15 at 10:50 am
Back to top
Reply
Replies (1)
OptionsTop
Replies (1)

quote:
As long as lenders aren't requiring flood for X zones, lots more people are going to go without flood insurance at those premiums.

re: Risk 2.0 - FEMA Finnda Eat!Posted by lsu13lsu on 9/15/21 at 10:49 am to lafloodcert
We need to encourage new ways to develop/build and discourage people from living in ways that get them flooded.

The government should not be subsidizing people to live in flood prone areas.
This post was edited on 9/15 at 10:53 am
Back to top
Reply
Replies (0)
OptionsTop
Replies (0)

to Everyone
Advertisement
Back to top
TDsngumbo

on 9/15/21 at 10:50 am to lafloodcert
If my zone x premium goes to 4,000 a year I’m dropping it and will just suck on their tits at claim time. The rest of the fricking country does it anyway.
Back to top
Reply
Replies (1)
OptionsTop
Replies (1)

on 9/15/21 at 10:50 am to lafloodcert
If I see a renewal premium remotely in that neighborhood for my home in zone X next year, I’ll gladly sell my house and move my happy arse right out of LA. I hear good things are happening in middle Tennessee.
Back to top
Reply
Replies (1)
OptionsTop
Replies (1)

quote:
All they're doing with this is discouraging people in lower risk areas from buying flood insurance at all. So now your risk pool is going to be much more highly concentrated in the areas most prone to flooding.

on 9/15/21 at 10:52 am to lafloodcert
The FEMA rule of 2 floods within any 10 year period needs to be revamped as well if they are making changes. Bought a house and the owners at the time “didn’t carry flood” but we were told we would be a Flood Zone X. A few months later we are notified of this rule and get hit with the highest premiums. We have been in the home 10+ years now with zero flood claims.

At what point will residents be able to pursue actions against local government for failing to maintain proper drainage is another issue. It’s pretty well documented how crappy our current drainage system is, and pumps seem to “fail” constantly but when our homes flood, we have to fight with insurance to restore what we had regardless of the pumps failing and drains being clogged with beads, trash, debris, vehicles, etc. It blows my mind that homeowners haven’t banned together to go after this.
Back to top
Reply
Replies (0)
OptionsTop
Replies (0)

quote:
I’m dropping it and will just suck on their tits at claim time.

Can anyone who has done this describe the process? I have not heard good things about this and the only people who succeed at it are the lifetime titsuckers.
Back to top
Reply
Replies (1)
OptionsTop
Replies (1)

quote:
If I see a renewal premium remotely in that neighborhood for my home in zone X next year, I’ll gladly sell my house and move my happy arse right out of LA.

I don't live in a flood prone area and would need one hell of a rain event to flood, but I have FI any way and won't risk putting my family through financial hell when that once in a lifetime event rolls through and destroys the house.

Texas or Arkansas for me if that happens.
Back to top
Reply
Replies (0)
OptionsTop
Replies (0)

re: Risk 2.0 - FEMA Finnda Eat!Posted by TDTOM on 9/15/21 at 10:58 am to lsu13lsu
Mother in Law's boyfriend had flood insurance in Houston when the big flood happened, but his neighbor didn't. When it was all said and done the neighbor came out better than the one that had insurance.
Back to top
Reply
Replies (0)
OptionsTop
Replies (0)

on 9/15/21 at 11:04 am to lafloodcert
So it seems like there will no longer be zones for premium purchases... just every property rated individually?

I am in an X zone which makes no sense but it's because of the rebuilt levees in St. Bernard. I could easily see getting my rate spiked higher - even though we have not flooded since Katrina.

Welp my renewal is in Feb so I guess I don't have to worry about this until my Feb 23 renewal.
Back to top
Reply
Replies (0)
OptionsTop
Replies (0)

quote:
In South LA, it seems, lower risk areas have been flooding. Am I wrong there? All I hear is "this never flooded in the past!" So, it seems increasing premiums to the historically lower risk areas makes sense.

FEMA can issue revised flood maps to take into account changes in flood risk for an area due to new developments that are built up or drainage projects. If they'd have raised rates by a 10-15% on those "low risk areas" it wouldn't have been a major issue. But now you have homes in X zones that have never flooded but seeing rates go up 400-500% in the blink of an eye.
Back to top
Reply
Replies (0)
OptionsTop
Replies (0)

on 9/15/21 at 11:18 am to lafloodcert
Do premiums ever go down after the government overhauls something? Big, fat nope
Back to top
Reply
Replies (0)
OptionsTop
Replies (0)