re: Jay Glazer article about taysomPosted by Lester Earl

It is important to maintain a QB2.b option so to speak with Taysom’s planned usage in 2020. None of this will matter to your agenda though. Plus what team wouldn’t want Jameis on roster for 4 million dollars??? Which ones?
Back to top
Reply
Replies (2)
OptionsTop
Replies (2)

re: Jay Glazer article about taysomPosted by goatmilker

on 5/20/20 at 9:23 pm to goatmilker
No one but I can tell you it wouldn't have been on the level of a jameis Winston. That is the point, this jameis situation fell into their lap.
Just proves that Payton values taysom as a qb to a certain degree
Back to top
Reply
Replies (0)
OptionsTop
Replies (0)

re: Jay Glazer article about taysomPosted by Lester Earl 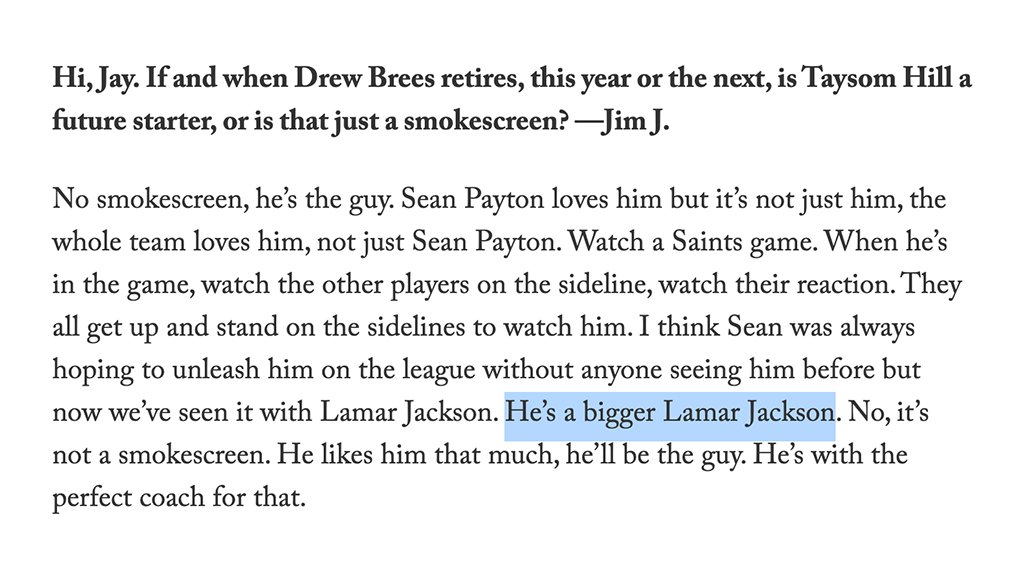 to Everyone
Advertisement
Back to top
GynoSandberg

re: Jay Glazer article about taysomPosted by Lester Earl

re: Jay Glazer article about taysomPosted by noonan

quote:
A bigger version of the league MVP is in da building and they keep bringing back a washed up 40 year old QB

They just misinterpreted “bigger” on 1st Things 1st like you did. (Actually a pretty long segment on Hill and this Glazer article—btw, they didn’t believe he was the answer, either). Bigger doesn’t mean better, it simply refers to him being physically bigger than Lamar, which he undoubtedly is. I assume the implication is that being bigger, his body might be able to hold up as a running QB. Now, that certainly may not be the case considering his injury history at BYU; however, he’s held up pretty well so far playing much more physical roles than QB.
Back to top
Reply
Replies (1)
OptionsTop
Replies (1)

quote:
You wanted to take out a HOF QB to put in a guy who threw six passes all season for a game winning drive in the playoffs?


On THAT day in THAT game, yes! Taysom was unstoppable all game on THAT day. Drew was not doing much, the O-line was getting whipped and Drew can't move around very well so again, yes I would have put Taysom in on that drive. The momentum he had late in that game was tangible, you could see it clearly. For perhaps the first time ever, I did not have any confidence in our Drew Brees lead offense getting the job done late in that game.
From a pure spectator standpoint, I would be curious to see what the aftermath would have been from that game IF Taysom would have gone in, and IF he would have lead us to a Win. Payton still turns to Drew the next week I'm sure, but how much does Taysom get in at QB from that point? It would have no doubt had to be increased snaps. And supposedly Drew had told some guys at the Pro Bowl that he was leaning towards retirement, I think if Payton had turned to Taysom in that Minnesota game and Taysom had got the job done and then increased his QB snaps in the weeks following that Drew would likely have retired
Back to top
Reply
Replies (1)
OptionsTop
Replies (1)

quote:
They just misinterpreted “bigger” on 1st Things 1st like you did.

I mean, the guy chose Lamar Jackson, said his name twice. It’s meant to mean something. He could’ve just said Josh Allen or Tim Tebow but he chose the league MVP. SP chose Steve Young to comp him to. People eat this stuff up, hang on every word with no context

I get it’s not to be taken literal. I was mocking the comparison
Back to top
Reply
Replies (1)
OptionsTop
Replies (1)

quote:
He inserted Teddy last year when it mattered and went 5-0. Them signed Jameis for this season for the same reasons.

You’re not being intellectually honest here, Les. You know that Teddy had to play last year and Jameis will have to this year (if God forbid Brees goes down again) because Taysom is such a huge part of the team in his multiple other roles. And with Cook’s slow start and Ginn being pretty much done, Taysom had to be available to be used in non-QB offensive snaps.

quote:
Good, 31 year old 1st time starting QBs do not exist. Like ever. In the history of football.

Maybe not. But Kurt Warner didn’t play an NFL snap until he was 27, and took a career 4-11 for 39 yards into his 1st career start at 28-years-old. And he’d have been even older if Trent Green hadn’t torn his ACL in the preseason. And since they had just signed Green that offseason, who knows how long it would have taken Warner to become a QB1 if Green hadn’t gone down.

Now, 28 isn’t 31 and Taysom isn’t Kurt Warner, but it’s not as crazy as you make it sound. And Warner was the just the 1st guy I thought of.

Rich Gannon was the 2nd. Pretty mediocre, kind of a journeyman after his stint with the Vikings. Began his career as 3rd-strong behind Wade Wilson and Tommy Kramer. Started 12 games at 25-years-old when Wilson went down with a thumb injury. The next season, demoted back to 3rd string behind a healthy Wilson and Sean fricking Salisbury. Finally won the starting job for the 1st time in 1992 (27 years old), but despite the Vikings being 8-3 and leading the NFC Central, he was benched for Salisbury in week 12.

The next year, at 28, Gannon goes to the Redskins where he is once again relegated to 3rd string behind Mark Rypien and Cary Conklin. He wound up starting 4 games that year, going 1-3 on 74-for-125 passing (59.2 percent) for 704 yards with three touchdowns and seven interceptions.

Then, all of a sudden, at 34, he signs with the Raiders and goes to 4 straight Pro Bowls, a Super Bowl, and was the NFL MVP at 37.

Just to be clear, I’m not convinced Taysom is the future QB1 here or if he is, if he’ll be any good. But you have to concede he is a very unique case. And he could wind up surprising us all.
Back to top
Reply
Replies (1)
OptionsTop
Replies (1)

You don’t think the fact they both are running QBs that played at BYU had something to do with that comparison?

quote:
People eat this stuff up, hang on every word with no context

Who? The talking heads? Of course they do—it’s fodder for content. I’m not sure there are a whole lot of Saints fans that actually believe he’s the next Steve Young or Lamar Jackson.
Back to top
Reply
Replies (1)
OptionsTop
Replies (1)

on 5/21/20 at 9:32 am to Lester Earl
Well I see some things never change. Lester is still the hugest douche on this page as he does with his shitty sports writing.

Taysom is the starter next year period. If you dont like it or believe it I truly feel sorry for you but facts are facts.
Back to top
Reply
Replies (0)
OptionsTop
Replies (0)

He chose a QB coming off the best running QB season NFL seasons, top 10 in numerous passing categories and league MVP and the hottest name in the NFL right now

Taysom Hill, dude. 31 year old QB with 13 NFL passes to his name. There is a laundry list of QBs to comp him to. I gave you two examples below.

What is confusing? Allen and Tebow led teams to the playoffs on the back of their rushing. They are terrible passers. They are more apt comparisons for Hill.

You don’t think the fact they both are running QBs that played at BYU had something to do with that comparison?

Of course it had to do with the fact that he's a running QB. That's not the point, the point is he's mentioning in the same breath as one of the best QBs ever. Which is fine. But it does HIll no favors as he will be mocked for stuff like this every time he fails

Who? The talking heads? Of course they do—it’s fodder for content. I’m not sure there are a whole lot of Saints fans that actually believe he’s the next Steve Young or Lamar Jackson.

Who? People have been hanging on these comps on this board and twitter since they were made. Both sides.
Back to top
Reply
Replies (1)
OptionsTop
Replies (1)