6
***IMPORTANT*** Before starting your own thread, read this one. If you have new information, post here and I will update the thread. If you start a new thread, the regulars on here will post Spider-Man memes in it and the admins may wack or anchor it and smite you.

PERSONAL
Parents are Robin and Jimmy Burrow … His dad, along with his two older brothers – Jamie and Dan – all played football at Nebraska … His dad coached Joe’s two older brothers at Nebraska … Grew up in a football family as his dad had been a college football coach every day of Joe’s life until his recent retirement from the game following the 2018 season … Past coaching stops for his dad include Iowa State in Ames, Iowa, which is where Joe was born, along with Nebraska, North Dakota State and Ohio University … Graduated from LSU in December of 2019 with a Master’s degree in Liberal Arts. 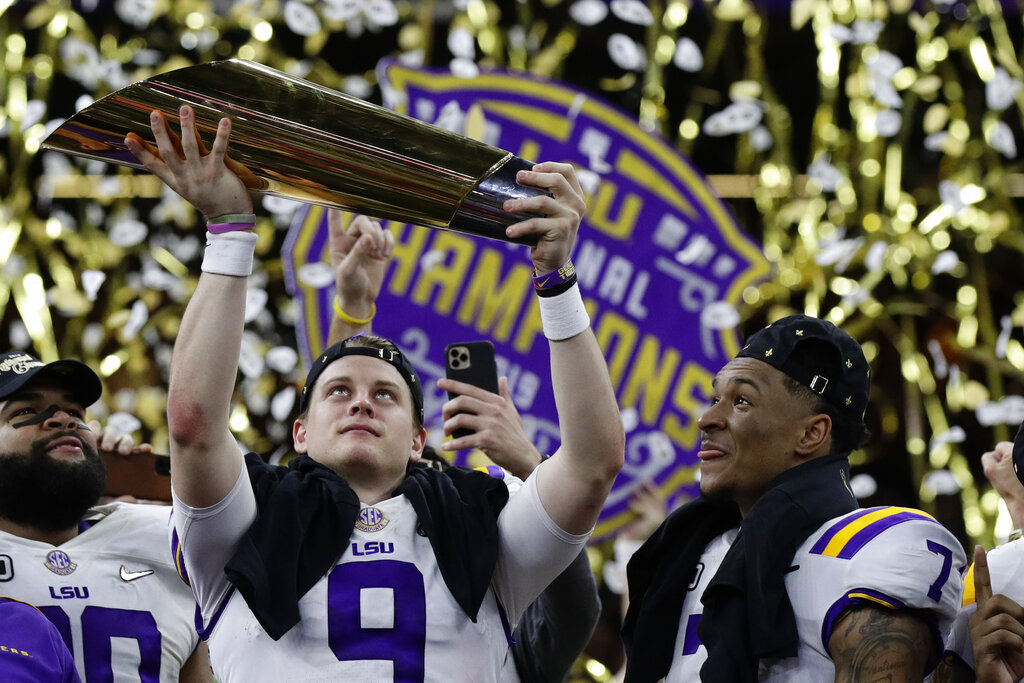 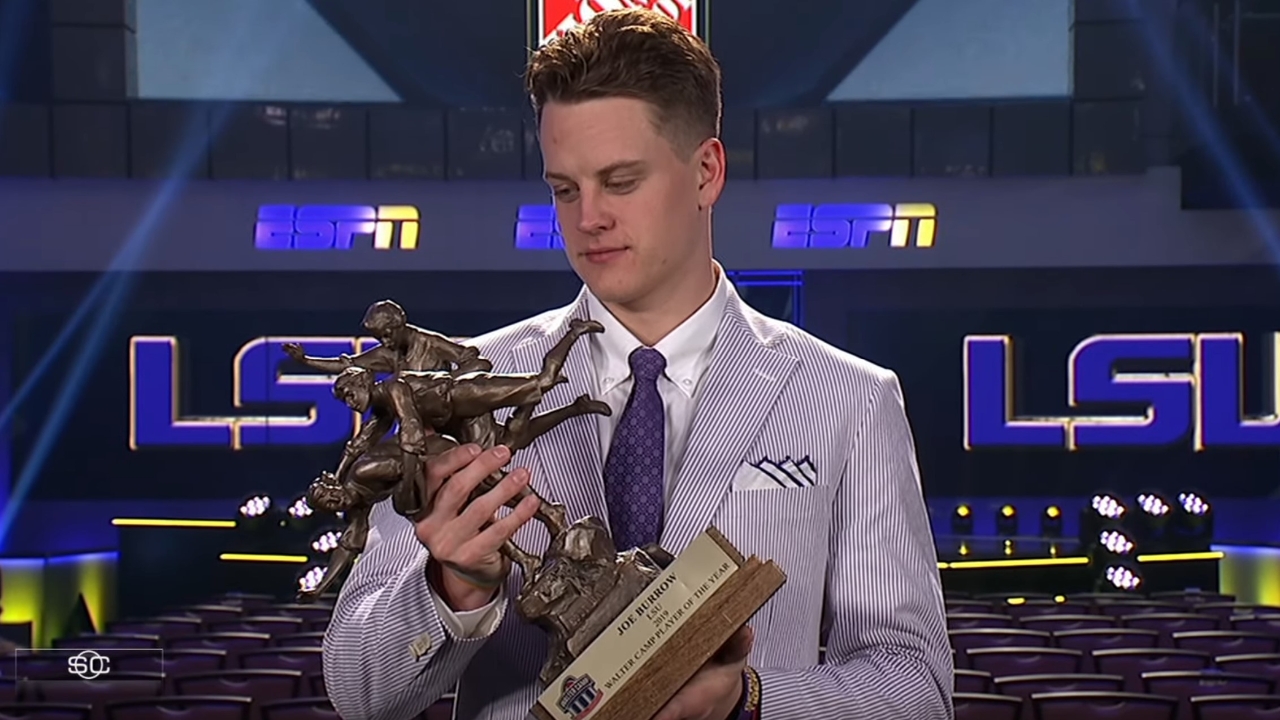 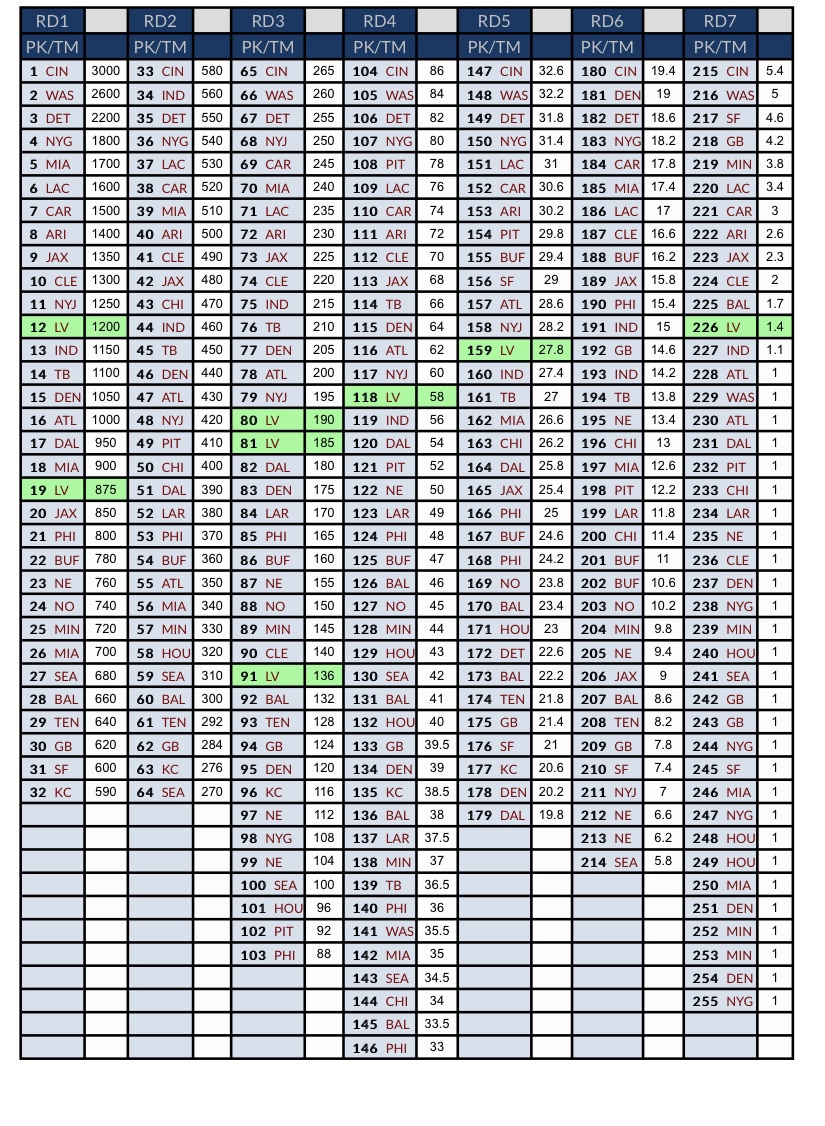 What would it take to trade up?

quote:
“I’m telling you…. [Cincinnati is] holding onto the pick, and they are going to take Joe Burrow No. 1”

Put it on the bottom line for
@AdamSchefter!

quote:
Cincinnati Bengals defensive end Sam Hubbard is apparently already bringing Joe Burrow into the ways of the team ahead of the 2020 NFL draft.

While it’s all in good fun in the Miami area this week for the upcoming Super Bowl, Bengals defensive end Carlos Dunlap let slip that Hubbard is hanging out with Burrow.

Carson Palmer offered Burrow a warning based on his own experience in Cincinnati, in an interview with The D.A. Show with Damon Amendolara on CBS Sports Radio. "That's why I wanted out: I never felt like the (Bengals') organization was really trying to win a Super Bowl, and really chasing the Super Bowl," Palmer said.

quote:
Just a reminder that Skyline is terrible. That is all.

quote:
Burrow may be thinking about trying to get the Bengals to not draft him — or to get someone else to trade up and get him. And the evidence is becoming more and more clear.

In the aftermath of winning the national championship, Burrow said that he’s happy to play for any team that will pay him to play football. Which presumably includes the Bengals (although owner Mike Brown would surely love to get Burrow to keep playing for free.)

Then came the Super Bowl week shot across the bow from former Bengals No. 1 overall pick Carson Palmer, who went on the record to say the Bengals aren’t trying to win a Super Bowl. (Based on Palmer’s time with the Bengals and with other teams, it’s safe to say he knows.) Palmer’s assessment became more ominous when it quickly came out that Palmer’s brother, Jordan, will be helping get Burrow ready for the draft.

Next, Joe Burrow appeared on The Dan Patrick Show. And Burrow didn’t reiterate his “whoever wants to pay me money to play the game of football, I’ll play for ’em, it doesn’t matter to me” line. Instead, Burrow said this: “You want to go No. 1. But you also want to go to a great organization that is committed to winning. Committed to winning Super Bowls.”

quote:
From NFL Now: The #Bengals are willing to work with QB Andy Dalton on a trade, I'm told, a plan that has been communicated to him. This meshes with what exec Duke Tobin told me a few weeks ago that when decisions happen, "I'll be in contact with him."

quote:
The Bengals think highly of Dalton and are willing to help him choose his next destination. It's a foregone conclusion that Dalton will be suiting up for a new franchise in 2020.


quote:
Trading Dalton could also signal the Bengals are ready to move forward with using the No. 1 overall pick in the 2020 NFL Draft on a quarterback. As of the time of this publication, LSU quarterback Joe Burrow is expected to be the No. 1 pick.


quote:
The Bengals reportedly have no interest in trading the No. 1 overall pick. This may be another sign the franchise is leaning toward drafting Burrow. Bengals offensive coordinator Brian Callahan has even admitted the team's playbook will be easy to learn for Burrow.

quote:
The Cincinnati Bengals own the No. 1 overall pick in the 2020 NFL draft and have numerous strong options for how to use the selection, but sources connected to both college football and the NFL say the team has already decided who the pick will be.


quote:
According to a coach who worked with Burrow in college, Cincinnati has clearly signaled the former LSU quarterback is its choice without coming out and saying it. And that's how the NFL wants it. There is an unwritten rule that teams not tip their hands as far as the top pick, as the league wants the drama and excitement of the selection's announcement on live television.

Bartkowski personally delivered the message to Burrow’s family during a Davey O’Brien Award event on Sunday night in Fort Worth. Bartkowski, the No. 1 overall pick by the Atlanta Falcons in 1975, received the Davey O’Brien Legends Award this year.

quote:
As far as Burrow is concerned, he refused to tip his hand on his thoughts about going to the Bengals. He’s an Ohio kid and would likely enjoy playing in his home state.

But he has to weigh that with what’s best for his football future, acknowledging he has played well enough to garner leverage throughout the process.

“I do have leverage,” Burrow said. “They have their process and I have my process. We haven’t even gotten to the (NFL) combine yet. There’s a lot of things that happen leading up to the draft and a lot of information gathered.

CSP talks about Burrow at the 11:20 mark. Basically it says:

quote:
Q: What would it take to get Joe Burrow?

CSP: “I’d go get fitted for a wedding dress?”

“First off, history; Cincinnati hasn’t traded a lot to begin with...”

“(Cincinnati) had a bad year. How do you avoid having another bad year? The first step is finding a guy like Joe...”

Joe Burrow statement at combine:
“Yeah, of course I want to be the first pick... That’s every kids dream.”
“I’m not going to not play. I’m a ball player, whoever picks me I’m gonna go show up.”
“Whoever picks you, picks you and you gotta go play.”

quote:
if ESPN NFL reporter Jeff Darlington is correct, there should be no more debating which direction the Bengals will go...

I can tell you that from speaking with a person in that meeting, they were blown away by Joe Burrow. He said that he was like 'a 10-year vet.' That he 'exceptional'.

"I think after hearing the way this meeting went down, we should absolutely expect Joe Burrow to wind up No. 1 with the Cincinnati Bengals. And both sides seems very clear, despite maybe some of the rumblings that existed in the past few weeks, that if he were drafted No. 1, he would be playing for the Bengals."

Wonder what players could be thrown in to account for the gulf of draft value? 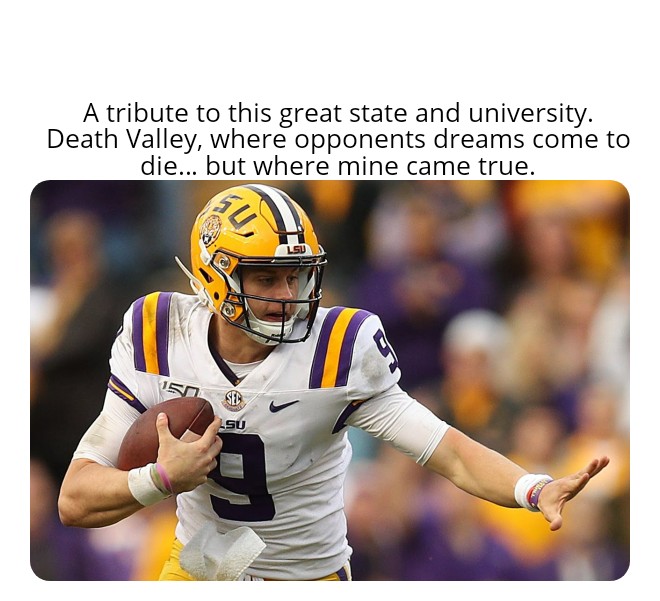 to Everyone
Advertisement
Back to top
HuRRiCaNe MiLeS

on 2/10/20 at 7:15 am to HuRRiCaNe MiLeS
Please label this post correctly as not Saints related.
Back to top
Reply
Replies (0)
OptionsTop
Replies (0)

quote:
, the regulars on here will post Spider-Man memes in it and the admins may wack or anchor it and smite you.

So they will be smitten with me?

I’m looking forward to more Joe Burrow posts on this board.
Back to top
Reply
Replies (1)
OptionsTop
Replies (1)

So they will be smitten with me?

Bro, a meme is scary.
Back to top
Reply
Replies (0)
OptionsTop
Replies (0)

what does one do with a Masters in Liberal Arts?
Back to top
Reply
Replies (2)
OptionsTop
Replies (2)

quote:
the regulars on here will post Spider-Man memes


came to post Spider Man Memes, then saw it was you. I'll allow it!
Back to top
Reply
Replies (0)
OptionsTop
Replies (0)

Blah, blah, not realistic, too much trade compensation, blah blah.

People watch football to be entertained. Nobody in America loves football like people in Louisiana.

Here we have too great of a story that can't be passed.

Can you imagine the excitement?

You trade who you need to trade to acquire the ammunition, then go get him.

People in Louisiana would go bananas and it would be new beginning for the Saints...just like after Katrina.
Back to top
Reply
Replies (0)
OptionsTop
Replies (0)

on 2/11/20 at 8:10 am to Suntiger
If for some absolutely retarded reason the Miami Dolphins were to sign Taysom to a restriction contract and we would up with the 5th overall pick (per CBA)

It would take #5 , #24, 1 next year to get Burrow. You could throw in a player to sweeten the deal but this is a dream and never will happen.
Back to top
Reply
Replies (3)
OptionsTop
Replies (3)