Hello again, Who Dats & Who Datettes and welcome to the 2020 New Orleans Saints Week 11, Game 10 thread.

The one week I decide to talk about how healthy we are, that happens.

Welp, can't take it back now. The win over the 49ers was as costly to our attrition as any game we've seen lately, and so now we head into the stretch of 2 games in 3 weeks against our most hated rival in the Atlanta Falcons at way less than 100%.

And with Drew Brees now out of the picture for at least the next 3 weeks, it's reportedly Taysom time as Taysom Hill will apparently be given the keys to the Saints offensive castle in the absence of our future hall of fame quarterback. The big question, can Hill duplicate the performance of Teddy Bridgewater from a season ago where Bridgewater went 5-0 as a starter?

Looking at the schedule, you'd think this is as good a time as any for Brees to go down with an ~4-week injury, considering our next 4 opponents are a combined 12-23-1.

But the Falcons are actually trending upward after canning head coach Dan Quinn & GM Thomas Dimitroff following an 0-5 start and the ascension of Raheem Morris to interim head coach, having won 3 out of their last 4, and are only a toe stub & too much forward momentum from having won 4 straight. Plus, while the Saints were getting beat up by the 49ers, the Falcons were sitting at home resting on their bye week.

Fortunately for our new starting QB, Taysom Hill, he gets to ease into this whole starter thing against the league's 3rd worst defense in terms of yards per game & 2nd worst pass D, though Atlanta does boast the 6th best D in terms of stopping the run, which possibly could be attributed to the passing success teams have against them.

It was a very Happy Thanksgiving for the Saints when these 2 teams last played each other, which was on November 28th, week 13 of the 2019 season. The Saints defense sacked Matt Ryan 9 times & Taysom Hill blocked a punt, caught a TD pass, & rushed for a TD as the Saints closed out Thanksgiving Day with a 26-18 win over the Falcons in Atlanta. The win clinched the 2019 NFC South Division Championship for the Saints, the team's third straight division championship.

Injury Report: (Players only currently on the 53-man roster who have a game designation from the Friday injury report listed here)
ATL-
NONE
(while everyone on their 53-man roster is good to go, they do have a few interesting names on IR. Safety Damontae Kazee is injured while DE Dante Fowler, Jr. & WR Laquon Treadwell are on the COVID list)

NO- (since he was placed on injured reserve on Friday, Drew Brees will not be listed below)
Josh Hill (Concussion) OUT
Dwayne Washington (Back) OUT
Marshon Lattimore (Abdomen) QUESTIONABLE

Weather: In the Superdome again means no weather to worry about. For the second week in a row, capacity in the Superdome is at 6,000 fans for today's game.

Uniforms: Last home game for a month means one last look at black on black in the Superdome for a while 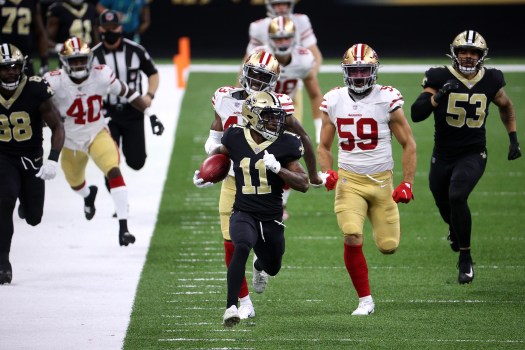 Umpire: #102 Bruce Stritesky
Down Judge: #113 Danny Short
Line Judge: #85 Daniel Gallagher
Field Judge: #15 Rick Patterson
Side Judge: #41 Boris Cheek
Back Judge: #82 Jimmy Russell
Replay Official: TBA
Replay Assistant: TBA
**Due to "regionalization" of crews due to the COVID-19 pandemic, Brad Allen has 1 member of his 2019 crew with him in 2020, BJ Jimmy Russell. LJ Daniel Gallagher is in his rookie season as a NFL official. Umpire Bruce Stritesky was a member of Bill Vinovich's crew last season and I'm fairly certain he was at THAT game that shall not be spoken of.**

on 11/22/20 at 12:30 am to rt3
OP way too long, mate. While some may appreciate this information overload, I wish that in the future you would please consider leaving the OP blank and then quickly pasting all the junk from what WOULD be your OP into the first reply. This would be much appreciated for those of us who duck in and out of threads and don’t enjoy scrolling for 5 seconds every time we want to reply.

I Love the Saints!!!

on 11/22/20 at 8:29 am to jkylejohnson
They split the series with the Panthers with Bridgewater under center 23-16 & 25-17 with the road team winning both contest. We got better talent on both side of the ball than Carolina and though Taysom lacks Bress experience, he can make up for it in talent. Last season the Road team won both meetings ATL 26-9 NO-26-18
Back to top
Reply
Replies (1)
OptionsTop
Replies (1)

I guess PRob starts opposite Jackrabbit.
This post was edited on 11/22 at 8:46 am
Back to top
Reply
Replies (2)
OptionsTop
Replies (2)

to Everyone
Advertisement
Back to top
ATLienTiger

on 11/22/20 at 9:11 am to DBG
The talking heads this morning saying internal discussion within the team has some people questioning the Hill start, with many in favor of Winston. I wonder if this is true or just pure speculation on their part. If true Payton would have to of course yank Hill if he is struggling or have some very upset players within that locker room.
Back to top
Reply
Replies (3)
OptionsTop
Replies (3)

Just turned on the ESPN pregame show. Reminds me why I don’t watch this kind of shite. Tedy Bruschi saying he’d be pissed if he was a Saints player that Hill is starting over Winston
Back to top
Reply
Replies (0)
OptionsTop
Replies (0)

quote:
The talking heads this morning saying internal discussion within the team has some people questioning the Hill start, with many in favor of Winston.

quote:
The talking heads this morning saying internal discussion within the team has some people questioning the Hill start, with many in favor of Winston. I wonder if this is true or just pure speculation on their part. If true Payton would have to of course yank Hill if he is struggling or have some very upset players within that locker room.

quote:
On a day the New Orleans Saints are starting a new quarterback in Taysom Hill, sources tell ESPN the Saints defense is going to be without their key CB Marshon Lattimore. I’m told he will not be active against the Falcons.

No Lattimore today, per Russini
Back to top
Reply
Replies (0)
OptionsTop
Replies (0)