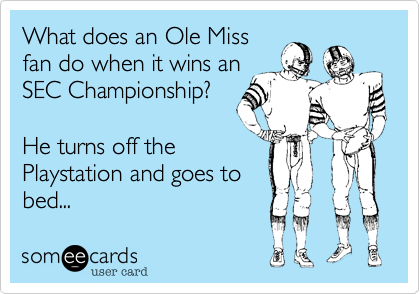 By the picture that is a flat out lie.
Back to top
Reply
Replies (0)
OptionsTop
Replies (0)

on 10/20/16 at 1:09 am to Weston5
Ole Miss joke: there is an arch in The Grove titled "Walk of Champions". The only OM FOOTBALL Champions are now septogenarians.
Back to top
Reply
Replies (1)
OptionsTop
Replies (1)

Ole Miss is 1 of only 2 SEC West teams to have never played in an SEC CG. The other is A&M, and OM has had 20 more chances than they have (0 for 25 overall, including this season).

Ole Miss Dad: How the hell should I know? I'm only 53 years old, dammit.
Back to top
Reply
Replies (0)
OptionsTop
Replies (0)

on 10/20/16 at 3:34 am to soccerfüt
I remember Chad Lavalais pushing Eli's Center back into his feet to trip him up in the final minute of the '03 game like it was yesterday.

7 years with a Manning QB... ZERO SEC Championships. (That's a joke on Ole Miss, not Archie or Eli.)

Bonus trivia: Surprisingly there is only 1 SEC Championship ring in the Mannings combined 11-year SEC career.
This post was edited on 10/20 at 3:46 am
Back to top
Reply
Replies (0)
OptionsTop
Replies (0)

on 10/20/16 at 4:56 am to Mindless Zombie
Was completely unaware that OM had switched mascots from "Colonel Reb" to a "Black Bear". Fired up Google and found a wiki on the topic here.

So the switch happened in 2010? Well how about that. Learned about a blind, African American peanut vendor named Jim Ivy who cheered on the OM football team for sixty years and became something of a campus fixture until his passing in 1955.

Ya'll finally figured out an animal mascot has more market upside than this.