re: 2020 Garden ThreadPosted by Shoalwater Cat

re: 2020 Garden ThreadPosted by sloopy

re: 2020 Garden ThreadPosted by nerd guy

quote:
The cages by themselves aren't really enough to support a full grown indeterminate plant, especially in wind/rain. Learned all that the hard way.

OH yea that's a good point. I had issues too and ended up using those shorter wider cages and also made them slightly overlap so they'd support each other. They weren't too dense either from making it too hard to pick or find them.
Back to top
Reply
Replies (1)
OptionsTop
Replies (1)

So far everything is really starting to take off. I’ve got blooms on my tomatoes, zucchini, bell peppers, and Tabasco peppers. Cucumbers have doubled in size in the past 3 days.

1 of those funky jalapeños I had posted about earlier sorted itself out. The other 2 are still crippled but seems like they will sort themselves out.

The blueberries are still throwing flowers out so I’ll get more than I thought from them. I’ve seen quite a bit of new growth since moving them into full sun.

The Meyer lemon is full of blooms and the ruby red grapefruit is just starting to bloom. Just waiting on the satsuma now.

At first I was worried because the garlic are still going in the middle of my bed. It actually works out though because I can stagger planting my beans and cucumbers to stretch out harvesting.

Maybe I’ll be ready for a zombie apocalypse

on 3/21/20 at 11:09 am to jyoung1
Got a light meter and confirmed my suspicions on why my plants were dying inside. The new light i got on amazon per someone’s recommendation gives 15k lux which is perfect I think. The old lights I was using are only giving 2-4k lux lol. Which is like an 1/8 of the light you get outside when it’s overcast. Yesterday, I went outside with it, it was cloudy and I was under trees and it was reading 30k lux! And in the sun it reads 75k!
Today it’s overcast and it still reads around 25k.

Just relieving to figure out the issue to what was giving me so much grief haha. Plants are all doing great now that they’ve been outside for a couple weeks. About half are in containers now.
This post was edited on 3/21 at 11:11 am
Back to top
Reply
Replies (1)
OptionsTop
Replies (1)

I finishing planting all my space out today. I filled my cucumber box and the ones that were already there are climbing and flowering. Cucumbers are sweet success and a Ukrainian pickling cucumber. Both are self-pollinating.

I also planted two eggplants for the first time and sowed seeds for 6 okra plants. I've never grown eggplant, but my old boss called me last weekend and had started a bunch of seeds. She game me a few and I picked the Nubia and Fairy Tale (sp?) varieties to grow. I put the supposedly smaller variety in the raised box on my fence. I filled the box with that, a habanero plant, a topped jimmy nardello plant, a patio cherry tomato, a redskin pepper, hot wax pepper, and a gypsy pepper. It should be a pretty cool box assuming everything does decently well.

I wound up planting four more tomatoes in bags because of the early bacterial issues on my in-ground plants. After I did all that, I'm pretty sure I got rid of the bacteria shite (for now) with peroxide and copper fungicide. So, final tomato varieties are 4 cherokee purple, 1 striped german, 2 berkeley tie dye, 2 fred's tie dye, 2 new big dwarf, 2 big beef, 1 sungold, 1 sweet million, 1 red torch, and 1 cherokee carbon (given to me).


Tiger zucchini plants are already flowering but damn the plants are annoyingly big. My squash plants aren't flowering but growing well. Some of my peppers plants have small peppers on them and all are flowering except the hot peppers. I topped them kinda late and they're a bit behind the other peppers. It seemed like this weekend everything kind of took off.

I haven't had any bug issues yet, so I can't comment on the marigold situation. They look cool though

. I transplanted a satsuma tree last April and it didn't produce at all. Now it has a ton of blooms on it so I'm pretty happy about that. A decent amount of fruit is setting already. Same with my lemon tree.

This is probably way more than anybody really wants to know, but I'm gonna try to keep better track of all this stuff this year via these posts so I can look back and see what worked/what didn't.

quote:
I transplanted a satsuma tree last April and it didn't produce at all. Now it has a ton of blooms on it so I'm pretty happy about that. A decent amount of fruit is setting already. Same with my lemon tree.

I just saw the first couple of blooms on my satsuma yesterday. I took another look at my ruby red and dear lord that thing better shed some blooms or it will be in trouble. It is loaded down with blossoms right now.
Back to top
Reply
Replies (1)
OptionsTop
Replies (1)

re: 2020 Garden ThreadPosted by TU Rob

on 3/23/20 at 11:30 am to BallsEleven
Jumping back into the garden this year. Once the kids were out of school for the 'Rona, we began brainstorming. My oldest son had shown interest in helping, so I'm taking advantage of the fact that they'll be out in the yard a good bit and can do small things that I can show them.

We're starting everything from seeds, so they can see how stuff works. So far, we have Cukes, Squash, two varieties of beans, two types of tomatoes, Okra, Watermelon, and for a fun loooooong term project, apple seeds.

I'm going to box in my spot more this time. Mainly to help with drainage issues. I got some 2x10 boards on Friday, and I'm going to box in the lower part of my area after I till it, then level it all out. There's not a flat spot in my yard, yet.

Any ideas on a good layout considering what I've got started so far? I know the squash and cukes do well early on in the season, and Okra ends up producing for a long time. I didn't have much luck with beans in the past, but I don't think I planted enough. In a totally separate area I am going to do all of the beans in one big patch. Probably 8x15 if I had to guess on the area. Would this be enough space for roughly 50-60 plants?

What I've done in the past is two rows of squash and cucumbers, then two rows of Okra, then tomatoes and melons at the bottom. I planted a ton of tomato seeds, since I usually get about 1/2 to 2/3 good plants out of what I started from seeds.
Back to top
Reply
Replies (0)
OptionsTop
Replies (0)

So far so good.

Early girl transplants are taking off and already have quite a few small tomatoes on them.

Better Bush plants are making tons of flowers and have several small tomatoes. They don’t seem to be making a ton of foliage. So they’re not as “bushy” as I thought they would be. Maybe they are still trying to recover from some slight herbicide damage. I don’t know. We’ll see how they do with time.

My Roma transplants seem to have been pretty stagnant and not growing since planting. Last week it hit them with some nitrogen. Looks like that was the catalyst they needed. I’m starting to notice some growth now.

My onion sets are growing ever so slightly. Like I said before, everything I read says we shouldn’t grow them right now. But the packaging said harvest in mid summer. So, we’ll see how this experiment plays out.

All of my pepper plants are thriving. But the Carmens are doing the best. Must have a couple dozen peppers on them already. Cayenne and jalapeño also have quite a few peppers growing.

Beans and cucumber seeds went down last week. They have all sprouted and are growing well. I’ve already thinned them down. These pictures are from a few days ago, so they’ve grown an inch or two since. 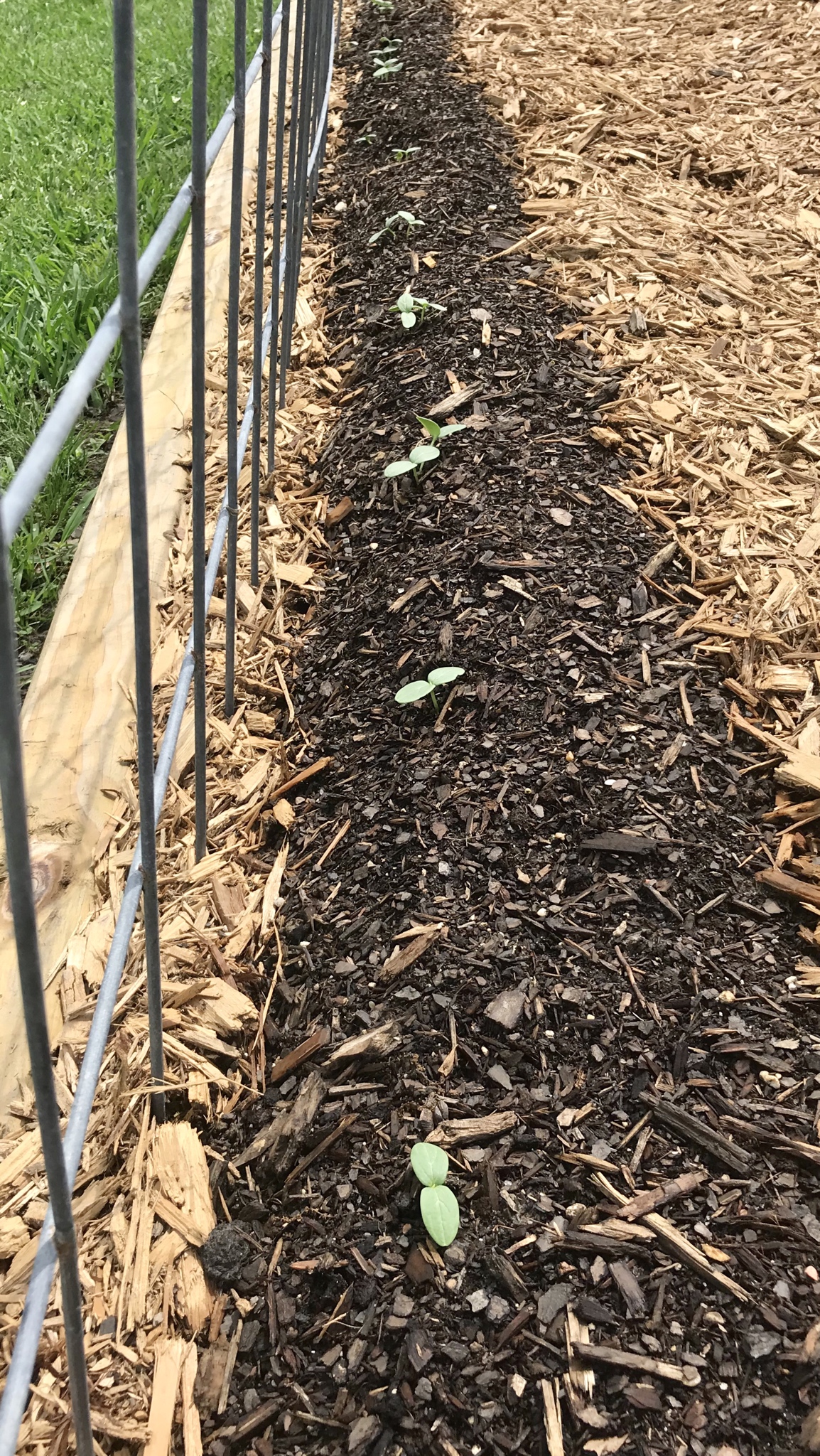 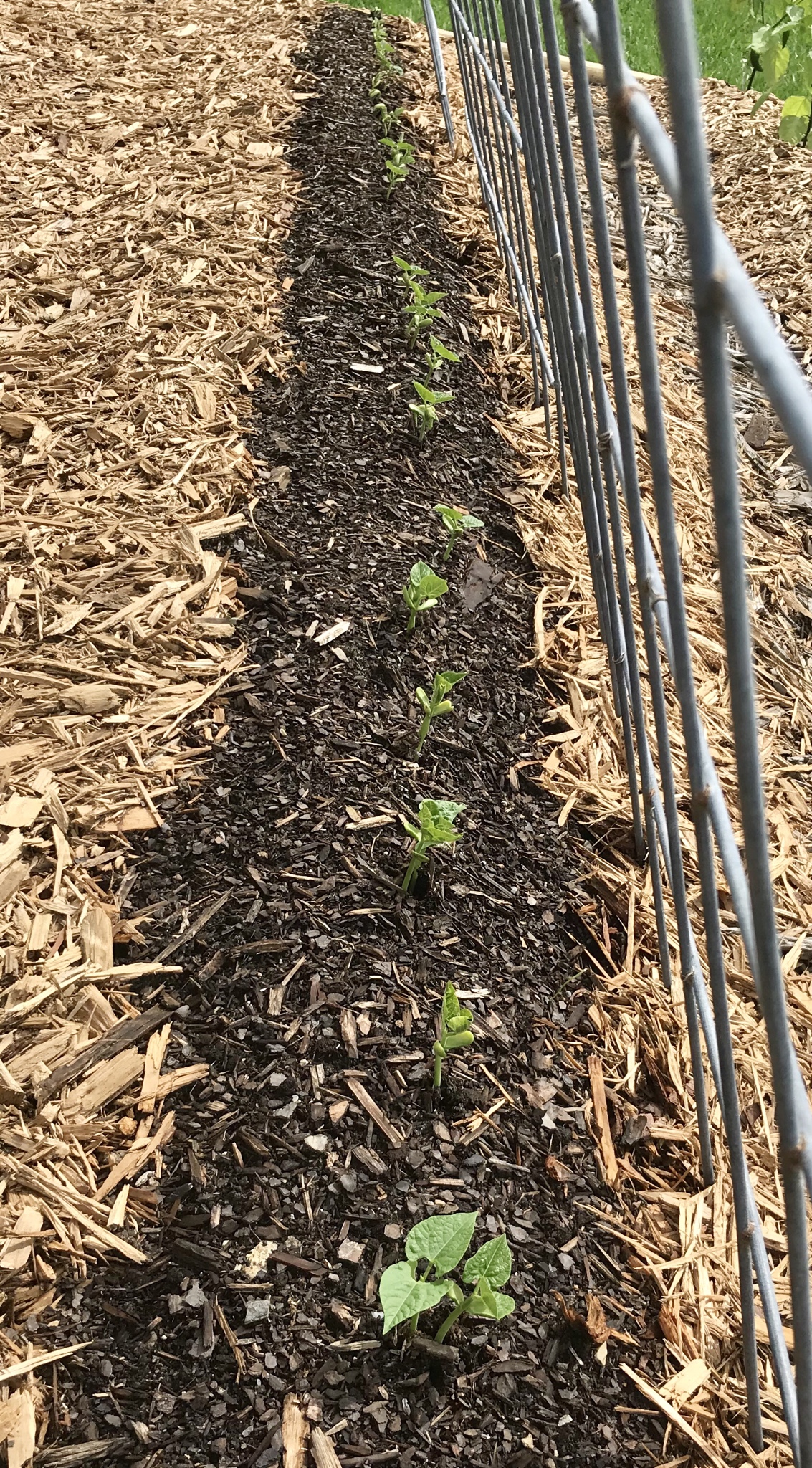 The Yard Enforcer is still doing a great job at keeping the squirrels away. However, since I was off of work half of last week, I was able to observe its effectiveness. On a couple of occasions squirrels got around it and still made it into the garden. They required manual removal.
This post was edited on 3/23 at 12:28 pm
Back to top
Reply
Replies (0)
OptionsTop
Replies (0)

on 3/23/20 at 1:18 pm to bluemoons
Everything is taking off well. Had a few peppers that didn't take well and something eating on bean leaves. Knocked them all out quickly though. I finally had the time to tie all 30 tomatoes up to the top wire on the T posts. Found my first cluster today on one of the muscadines I planted in 2018 and the satsuma has blooms all over! 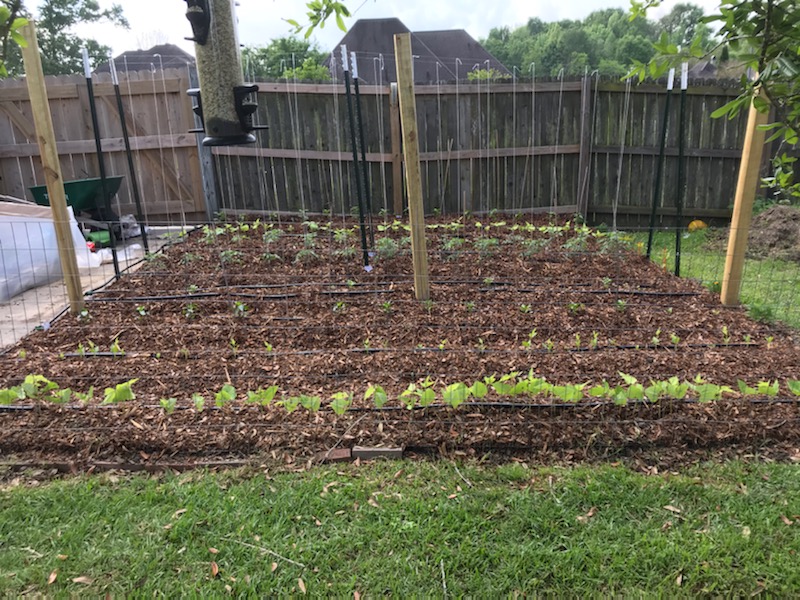 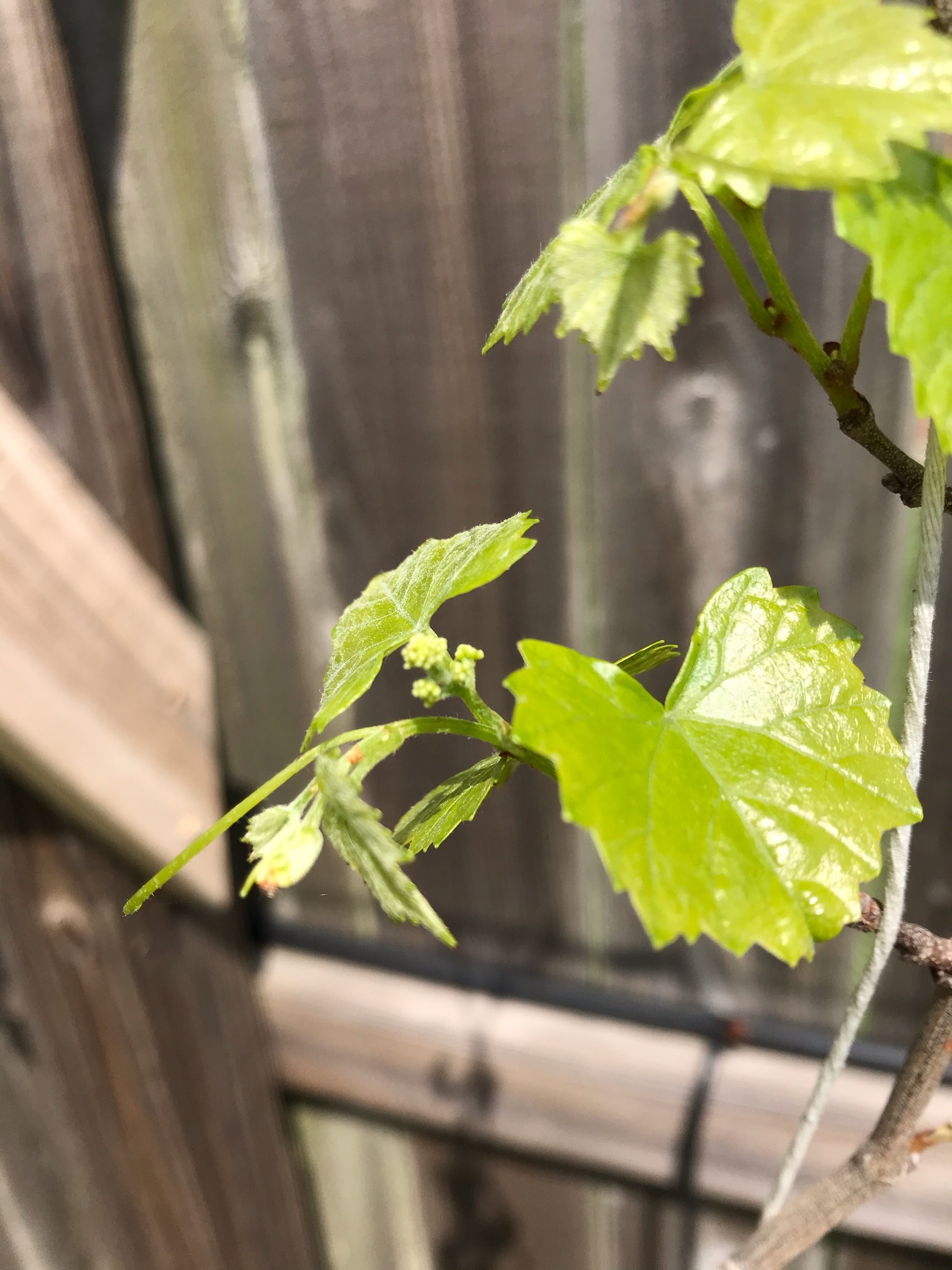 on 3/23/20 at 4:04 pm to jyoung1
That is a 14 gauge wire. Double wrapped and tied at each end to give support. That's my first year using it rather than cages or bamboo, so we'll see how it fares.
Back to top
Reply
Replies (1)
OptionsTop
Replies (1)

on 3/23/20 at 10:43 pm to lsurulzes88
Also, are you going to keep them strict pruned to a single main stem? Or just normal prune them and let the side stems be kind of supported by the other plants?
Back to top
Reply
Replies (1)
OptionsTop
Replies (1)

on 3/23/20 at 11:43 pm to jyoung1
Not too sure yet. I took a few of the bottom leaves off while tying them up yesterday. I will probably end up experimenting to see which works best for me, since this is my first year trying this way. I've also seen people weave string horizontally alternating through each plant. If I see a need more support, I may go that direction too.
Back to top
Reply
Replies (2)
OptionsTop
Replies (2)

on 3/24/20 at 9:43 am to lsurulzes88
Y'all having trouble with aphids already?
I looked at my peppers over the weekend and there was a significant aphid population accumulating already. Thankfully, no damage. I found a few ladybugs elsewhere in my back yard and placed a few on each plant. Next day, not a single aphid. I just feel like it's real early to start the aphid war.
Back to top
Reply
Replies (2)
OptionsTop
Replies (2)

on 3/24/20 at 10:15 am to thedrumdoctor
Not yet, but I'm sure it won't be long. I've fought them the last two years. I tried neem oil which seemed to work but not have any lasting effects. Bonide permethrin seemed to work better and last longer. They've decimated my cucumbers the last two plantings.
Back to top
Reply
Replies (1)
OptionsTop
Replies (1)

on 3/24/20 at 10:32 am to bluemoons
Last year they killed almost all of my pepper plants.
I'm gonna stay on them this year though. I bought some neem oil to ready just in case, but the ladybugs seem to have it handled for now.
Back to top
Reply
Replies (1)
OptionsTop
Replies (1)

on 3/24/20 at 11:05 am to thedrumdoctor
Not aphids, but the damn cucumber beetles have already shown up. They’ve eaten on a few of my bean leaves already. And they’re only a few inches tall right now. I captured and squashed a couple of them yesterday.
Back to top
Reply
Replies (0)
OptionsTop
Replies (0)

on 3/24/20 at 2:49 pm to thedrumdoctor
Checked my pepper plants this morning per your post last night, and 3 of them had aphids

. Sprayed them with neem oil. I’ll up it to Bonide Eight if they come back.
Back to top
Reply
Replies (2)
OptionsTop
Replies (2)