quote:
The Pancho's Mexican Buffet that is near and dear to so many old New Orleanians' hearts first opened in February of 1972 at 918 Gravier St. in the CBD.

Is that where Nacho Mama's was?

ETA, Sorry, friend, just noted that Nacho Mama's was on Common St. Your old picture looked like it could have been in the same space. I sadly never knew there was a NOLA CBD Panchos.
This post was edited on 9/10 at 12:41 pm
Back to top
Reply
Replies (2)
OptionsTop
Replies (2)

The building you are thinking of was never Nacho Mama's, but you realized that after you asked the question. The old Pancho's building, though, still has an interesting history. For nearly 50 years, it served as a Morrison's Cafeteria. That site was the country's fourth Morrison's, the city's second, with the first one near Lee Circle. It opened in 1923. Morrison's expanded througout the southeast. It survived there until September 30, 1970, even as other locations at Gentilly Woods and at 5516 Veterans continued into the 70s.

Panchos occupied that building from 1972 through 1980 when Casey's Restaurant, which only lasted a couple of years, moved there. In 1983 Hobnobber's Restaurant and Lounge started a short venture at that address which only lasted a few years. It then became a discotheque in the late 1990s before finally becoming an administration building for a parking lot company, which it is today.

I went to 2 Amigos tonight. The food was good, even if the atmosphere lacked in the original hominess. It is sad that the venerable Tom Fitzmorris never came to appreciate Pancho's.

I miss Pancho’s! Not sure why

but as a kid I frequented the one in McAllen, TX - we had to drive an hour to get to it but my brother and I felt like ‘big kids’ bc we got to go to the buffet by ourselves.

I also went to the one in Beaumont, TX a few times - our pancho’s glasses were from there but we lost those in Katrina

re: TulaneLSU's Top 10 dishes at Pancho's Mexican BuffetPosted by tigersownall on 9/13/20 at 5:54 am to TulaneLSU
Where did you go to high school? Jesuit? De la sale?
Back to top
Reply
Replies (1)
OptionsTop
Replies (1)

quote:
his was my Pancho's. My grandmother would take us to feed the ducks and Park Cheniere (now Sindey Torres) then we would feast at Pancho's.

I loved raising and lowering the flag for refills...

Thanks for sparking this memory!

to Everyone
Advertisement
Back to top
bigberg2000

You left off that beef stew thing they did. I have no idea what it was called, but it was beef and tomatoes in a red stew sauce. It was incredible!

They had, at least the one in Bossier had, a green stew and a red stew. The meat in the green stew was pork and that was my go to item; green stew over Mexican rice. That, the sopaipilla and cheese enchiladas were the reasons I went. And the flag of course.
Back to top
Reply
Replies (0)
OptionsTop
Replies (0)

re: TulaneLSU's Top 10 dishes at Pancho's Mexican BuffetPosted by Shingo

re: TulaneLSU's Top 10 dishes at Pancho's Mexican BuffetPosted by MAROON 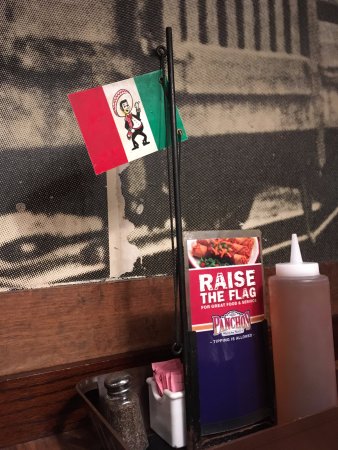 We also ate at that one back then (with our kids). Probably stood in the same line on Friday nights.

on 9/16/20 at 10:38 am to TulaneLSU
The CBD location with the courtyard dining room was magical. Disney's Epcot has a spot in it's Mexico that is very reminiscent of that Pancho's.
Back to top
Reply
Replies (0)
OptionsTop
Replies (0)

re: TulaneLSU's Top 10 dishes at Pancho's Mexican BuffetPosted by Macfly

Ate there as they say "back in the day". Pretty good food & sopapillas were nice.
Back to top
Reply
Replies (0)
OptionsTop
Replies (0)

re: TulaneLSU's Top 10 dishes at Pancho's Mexican BuffetPosted by Shingo