CEO of Konnech has been arrested.

quote:
Los Angeles County District Attorney George Gascón announced today that an executive with a Michigan-based company responsible for the software used in managing Los Angeles County election poll workers has been arrested as part of an investigation into the possible theft of personal identifying information of those workers 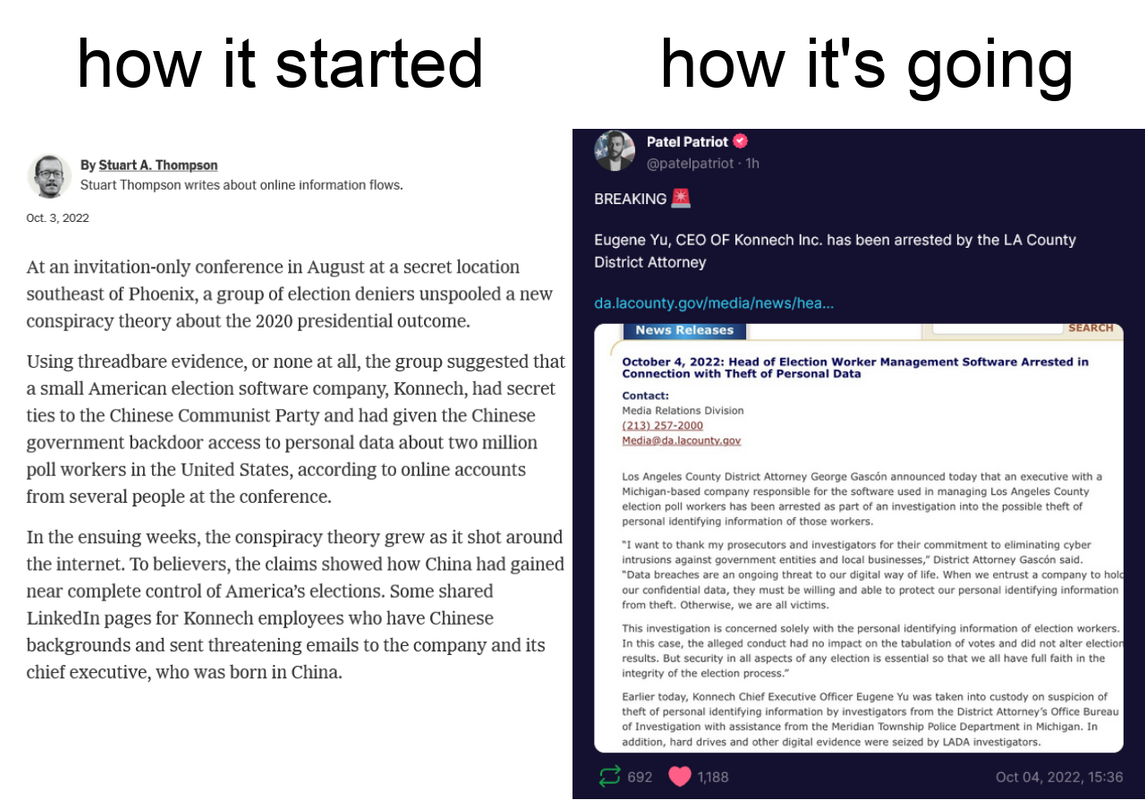 on 10/4/22 at 3:59 pm to VoxDawg
Kind of hard to believe if you ask me. With the way things have been going. Especially being it was LA. I wonder if other cities will follow with warrants.
This post was edited on 10/4 at 4:01 pm
Back to top
Reply
Replies (1)
OptionsTop
Replies (1)

The Twitter deal is going to through with Musk gaining control just before the midterms.

Trump has escalated his MAL docs/raid case to SCOTUS, where Clarence Thomas was presiding Justice over that district in FL.

Eugene Yu gets a shiny new set of chrome bracelets as the indictment proves the poll worker data was stored on Chinese servers.

If this is nothing, then I eagerly anticipate what it looks like when SHTF.
Back to top
Reply
Replies (2)
OptionsTop
Replies (2)

quote:
TOM DREISBACH, BYLINE: Yeah. This company that filed the lawsuit is called Konnech. They're a small business that basically makes scheduling software for poll workers. CEO's a man named Eugene Yu. He was born in China, became an American citizen decades ago, in 1997. And very few people had even heard of this company until very recently, when they became the subject of online accusations that they were somehow secretly helping the Chinese Communist Party infiltrate American elections and storing data on American poll workers on Chinese servers.

The company says this is completely and utterly bogus, but it has nonetheless fed racist death threats against the CEO. One message cited in their lawsuit says, quote, "might want to book flights back to Wuhan before we hang you until dead," end quote. And the company says these accusations were whipped up by a controversial group called True the Vote.

quote:
And the company says these accusations were whipped up by a controversial group called True the Vote.

quote:
Phillips and Engelbrecht noted that the field office that they worked with for those 15 months was “legitimate” and not “political law enforcement.”

“These were legitimate people who believed that this software posed a national security risk to the United States of America and they were working with us closely to try to stop this from being in place during the midterms,” Phillips said.


quote:
The FBI agents indicated that Konnech had already “been on their radar” and that there were “lots of other problems” with the U.S. election company including “banking issues” and problems involving the company’s overseas operations in “Australia” and “Canada”.


quote:
In April 2022, Engelbrecht received a call from one of the FBI agents, who informed her that the FBI’s “Washington D.C. headquarters” was now involved in the investigation.

Engelbrecht described how everything changed after this call, “There was no more goodwill, there was no more let's work together, the script had been flipped, and now we were the target,” she said. “That was a very disturbing call.”


quote:
“In fact, the president of this company sits on the board of another election company that is one of the founding members of DHS's election security task force. So you want to talk about the fox in the hen house? It's all right there,” Engelbrecht noted about Konnech CEO Eugene Yu’s membership on Votem Corp.’s Board of Advisors.

quote:
I'm still blown away that the LA DA has more balls than the FBI.

But it looks like local officials will take action. That's what we need.
Back to top
Reply
Replies (0)
OptionsTop
Replies (0)

to Everyone
Advertisement
Back to top
GhostOfFreedom

quote:
I'm still blown away that the LA DA has more balls than the FBI.

Hell, the FBI will probably go after the LA DA.
Back to top
Reply
Replies (0)
OptionsTop
Replies (0)

Posted by jimmy the leg

quote:
Doesn't pass the smell test. Gascon is a Soros DA and they tried to recall him but it didn't "work out". I can be hopeful, but George is NOT a good guy.

They will investigate, and despite a mountain of obvious issues, claim that everything is on the up and up.

In short, the Soros DA is getting out in front of things, and is doing so on terms that the Dem machine will be dictating.

on 10/4/22 at 4:56 pm to LEASTBAY
The site is down. Maybe, they will be encouraged by the mass interest in repairing the election system and punishing the wrong doers.
Back to top
Reply
Replies (0)
OptionsTop
Replies (0) “Konnech distributes and sells its proprietary PollChief software, which is an election worker management system that was utilized by the county in the last California election. The software assists with poll worker assignments, communications and payroll. PollChief requires that workers submit personal identifying information, which is retained by the Konnech.

Under its $2.9 million, five-year contract with the county, Konnech was supposed to securely maintain the data and that only United States citizens and permanent residents have access to it.

District Attorney investigators found that in contradiction to the contract, information was stored on servers in the People’s Republic of China.”

I always said Catherine was on the up and up at True the Vote but wondered about the Gregg Phillips guy.

Didn't they say the FBI shut them down? Glad they got ahold of somebody.

on 10/4/22 at 5:20 pm to VoxDawg
Additionally, I was told that The Pit event by True the Vote back in August was some convention of grifters and scam artists. This research into Konnech directly came from those citizen journalists who were invited.
Back to top
Reply
Replies (1)
OptionsTop
Replies (1)

quote:
They will investigate, and despite a mountain of obvious issues, claim that everything is on the up and up.

In short, the Soros DA is getting out in front of things, and is doing so on terms that the Dem machine will be dictating.

Right you are sir, this fella is BFF with Newsom.

Odd that they both were recalled but the votes werent there......hmmmm maybe its not just tampering with national elections.....

Newsom will pass an executive order making Cali a sanctuary state for voter fraud and thats the end of that.
Back to top
Reply
Replies (0)
OptionsTop
Replies (0)

Posted by trinidadtiger on 10/4/22 at 5:45 pm to LEASTBAY
If you remember, millions of records were stolen from the federal govt concerning personnel files of employees, including medical records.

BBC did a program on an American working at one of our embassies, clerical in nature. Some chinese guy became her boyfriend and her dad was ill and she was taking care of his medical on her govt plan. The father had to have another surgery and she was lamenting the cost to the boyfriend and he paid for it.

Soon after he just blatantly asked her for the files on something classified and she said she could not do it and he reminded her he had paid for daddy's operation....with a check that denoted on it the payment was for her dad, and definitely could be considered a bribe...now bring the files.

She stated that in hindsight she was definitely targeted, he knew her dad was ill before she told him, knew what a financial strain she was in, and knew what she had access to at the embassy.
Back to top
Reply
Replies (1)
OptionsTop
Replies (1)

·
1m
Now that he's been arrested and will go on trial for what he did, every single one of the hundreds of US counties using Eugene Yu's dirty CCP Konnech software as part of it's Election Management System [EMS] needs to cease using Konnech's EMS platforms and apps until we find out just how much of US election worker's PII has been schlepped off to China.

This means NOT using Konnoch's EMS software for these 2022 midterms.

TIME TO GET BUSY.

·
18m
I'm already seeing the black pillers going 'whoop-dee-doo, you got 1 arrest of 1 guy that won't amount to anything!"

You have no f**King idea what's coming.