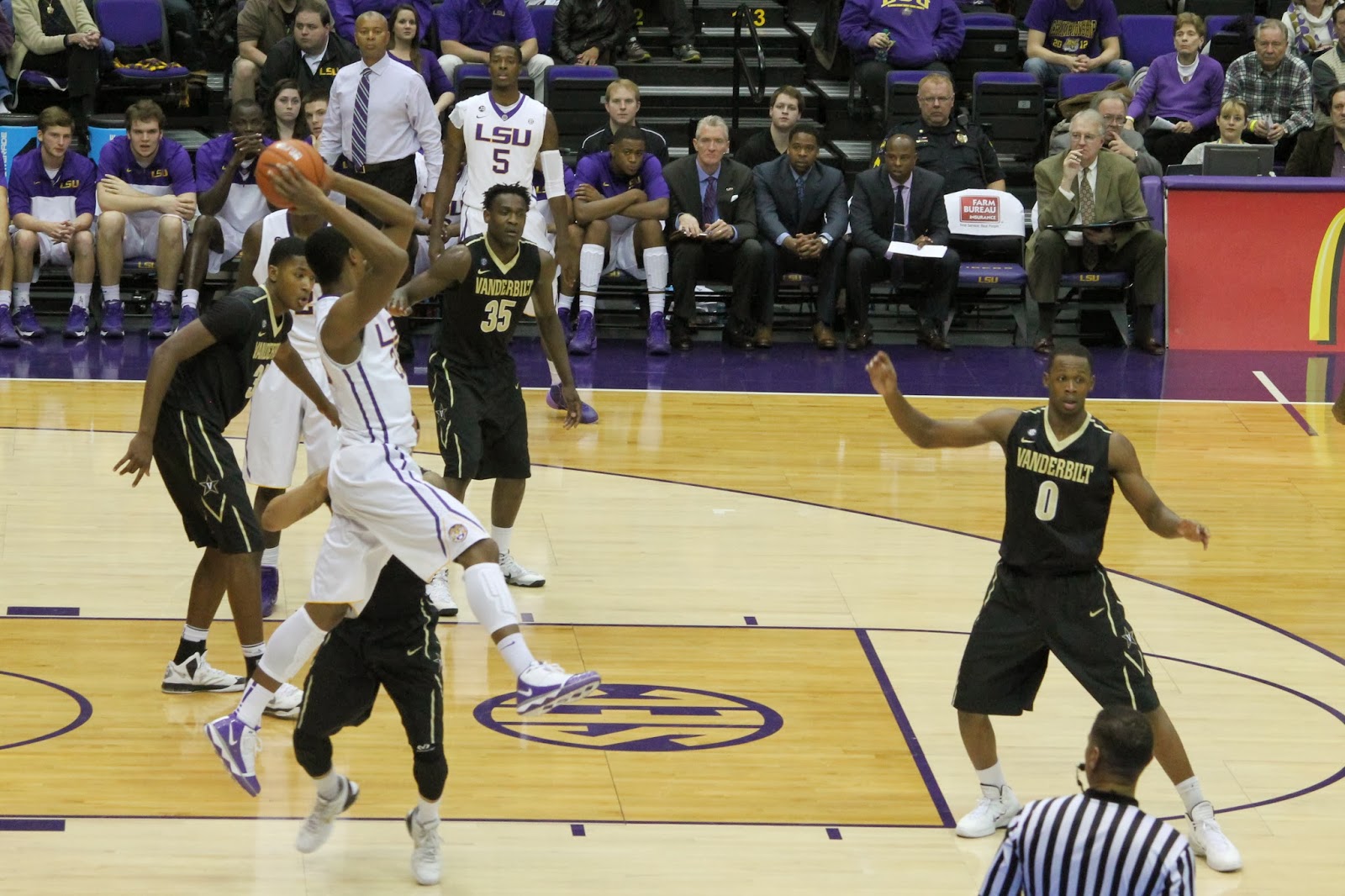 Let's talk unbelievable stat lines. At halftime, LSU led the rebound battle 33 to 10. Johnny O'Bryant had 10 first half rebounds, as many as the entire Vanderbilt team. On the game, LSU rebounded 62% of their missed shots. In the end, LSU had 48 to Vanderbilt's 24 rebounds.

The most impressive thing about the rebounding game was LSU didn't do this against an undersized team. They started a 6'10" center, a 6'7" forward and a 6'9" forward. Still, led by Johnny O'Bryant, LSU brought intensity that hadn't been seen this year.

Vanderbilt challenged LSU to beat their zone defense, which gave LSU struggles on Wednesday, and LSU succeeded in learning from their mistakes. They were able to get the ball down low using some high-low post passing. LSU was led by Johnny O'Bryant who scored 22 and rebounded 12. His intensity set the tone for the team who followed. LSU had 3 other double digit scorers including Jordan Mickey (13), Jarell Martin (11), and Andre Stringer (10).

In a strange turn of events, LSU's leading assist man was Shavon Coleman who had 4 assists to only 1 turnover. Even stranger was that Anthony Hickey had 0 assists for only the third time in his career.

LSU was the least efficient offense in the SEC thru the first 3 games, however, against Vanderbilt, LSU was able to score 1.31 points per possession a new season high. The game moves them up 5 spots to 9th in the league in offensive efficiency. While the offensive rebounds greatly helped acquire such an impressive PPP, 52% from two point, 36% from three and 75% from the free throw line all helped give LSU the win they so badly needed.

Shavon Coleman was 0-6 from the field but contributed with his 4:1 Ast to turnover ratio. He also had 5 rebounds and a steal.

Andre Stringer had 10 points on 8 shots and picked up 3 steals.

LSU's KenPom ranking went from 76 to 60 after the win.

LSU is only 1 game out of 2nd place in the SEC.

0
were Collis Temple and Wade Evans recognized for their part in maybe the PMAC/Assembly Center's biggest fight ever , the 40th Anniversary of the '74 Vandy game when guys were kicked out left and right? :lol:
Reply•95 months

0
Are the images only broken for me?
Reply•95 months

quote:
Are the images only broken for me?


They work for me, but it may still be bad links. Photobucket said I used all my space up. I'll try to work something out. I hate that I haven't been able to get my photo's working lately.
95 months

0
I'm not going to get too excited. Vanderbilt looked tired and when Siakam and Jones got a couple of fouls they really didn't have much to turn to.

But wow, that Odom guy is dangerous and Jones is a really good young player. I take it that he had his sights set on going to Vanderbilt and LSU didn't miss on him?

The next couple of games will be very telling.
Reply•95 months

quote:
I take it that he had his sights set on going to Vanderbilt and LSU didn't miss on him?

Very early in the process he made it clear he wanted out of BR and wanted to go to a school with the educational values of Vanderbilt. Smart young man and he played well Saturday.
95 months

0
I'll have a preview up for tomorrow's big game against Missouri this afternoon.
Reply•95 months

0
Next game will be a big contender/pretender determination.
95 months

0
Good win for the tigers ,just what the Dr. Ordered. Johnny set the tone in the first five minutes and the others followed.. I look forward to the night everyone plays well and we can sustain the energy for longer periods of time. Bring on Mizzou.... :geauxtigers:
Reply•95 months

0
Vanderbilt on has 7 players and their top player was kicked out of school last week.

This is nothing to celebrate. LSU is not anywhere near the team we were promised.

I never thought I would see a team coached by Johnny Jones play so lazy. No intensity in defense whatsoever. That can be coached and demanded. WTF, Johnny?
95 months
Popular Stories

Brady has been the OC at Carolina for the past 2 years.

Wilson is back home.

Johnson started in every game this season.

Wilson is returning home to LSU.

A few changes.
LATEST HEADLINES
Watch: LSU Releases New Recruiting Video Ahead Of The Early Signing Period Next Week
"One week... Why not LSU?"

3
Report: LSU Pursued Jimbo Fisher To The End Of The Search With This Large Contract
Fisher was making $7.5 million this year.

3
Report: LSU Special Team Coordinator Greg McMahon Is Retiring
Good luck with the next chapter of your life, Coach.