Q: From the last two games you've had time now to analyse those defeats to Leicester and Crystal Palace. Have you learned anything new since those matches when we spoke to you last and problems that you've been able to eradicate in the international break?

A: I'm going to try and give you a detailed response.

Of course I am obligated to look at our defensive performance. When you analyse you don't analyse numbers, you analyse the situations and if those situations were preventable

From the 17 goals we have conceded there were four penalties which were doubtful, preventable and that could have been avoided that are not linked to structural mistakes.

We conceded three own goals and one goal which was conditioned by something that was preventable. Through these eight goals it's impossible to generate conclusions which then have solutions.

If we hadn't conceded those eight goals which are not linked to how solid we have been defensively we would be the team who has conceded the least goals in the Premier League.

I analysed seven ways in which we conceded goals. Through direct free-kicks. As we commit very few fouls we only conceded one goal by this way.

Through set plays which come from set plays with crosses we have improved a lot. We conceded three goals from the first game via this way and then since then we've only conceded one in the remaining seven games.

These aspects are not of great importance. At one point in the Championship, they were a problem.

There is also another form of conceding goals which was also a problem in the Championship which is linked to the opponent scoring goals by going long from their own half.

This is very common in British football, much more common the Championship than it is in the Premier League. It's goals which are scored through flick-ons or second balls. Through this manner we have not conceded any goals. At some point in the Championship this was a problem or something to analyse.

Throw-ins have taken a greater importance in football. Those who prosper after a throw-in create danger. In this manner we have also not conceded goals.

But you can't analyse a team's defensive form unless you analyse the offensive performance. To say this in another manner, it is very easy to defend well if you decide not to attack. One of the conclusions which comes from the observation is that Leeds and Liverpool are the teams that create the most danger in the league. Or Leeds is in the top three who create the most danger in the criteria that we analysed.

We have an important amount of goals which situate us in the middle of the table. I'm saying that we create danger but when you create danger you need efficiency and accuracy. So we go back to the same - to develop your offensive game you need to create danger. The efficiency and the accuracy varies. In the same manner, to defend well, you have to avoid situations which put you at a disadvantage. After you have to try and resolve them.

So you can't attack well without taking three risks.

One, which is to play out from your own half. The ball arrives in the opponents half after a number of passes. We have conceded six goals because as we build the game in our own half we have lost the ball and this has resulted in the opponents scoring. This is a cost linked to the style of play Leeds has.

So if the style of play is valued then you have to accept the consequences which come with it. We wouldn't be one of the three teams who create the most danger if we played long from our goalkeeper.

The second consequence of the offensive profile of the team is to suffer counter attacks.

A counter attack is produced when the opponents have a lot of free players and has space to move into. In this instance it has a lot to do with the fact that we have a lot of players who go on the attack and when the attacks don't finish well sometimes our return is not able to catch up with the quickness of the opponents attack. But in this manner we've only conceded three goals.

There are also evaluations of the game which are badly interpreted. For example against Crystal Palace we didn't suffer any dangerous counter attacks. If you watch the sequence of the last goal, the fourth goal which appears to be a counter attack, we are attacking, we misplaced two passes which would have left us five against two of their defenders - that is a counter attack.

After the loss of the ball we suffered the goal of the value where we have a clear defensive superiority over Crystal Palace. The subject of whether we concede a lot of counter attacks, I think not.

And the third element of why we have conceded goals is when you can't neutralise in your own half an attack which is being built up by the opponent where the offensive creativity of the opponent, we are able to observe but not able to stop it. This is from the other cases, because there's no counter attack and we don't help the opponent by losing the ball in our own half.

Why are we then conceding these type of goals? Why? Because in the Premier League we have 40 of the best forwards in the world and also because our defensive system depends a lot that we press well when a team builds up from the back.

When we press well at the start of a team's attack we defend well and when we don't press well the ball arrives into our own half with the opponents comfortable. Through this conduct we have conceded three goals. What I see clearly is that our style, like all styles generates some things you wish for and some that you don't.

I gave you all of this explanation because you asked me if I have been working on resolving the fact that we have conceded so many goals.

I have to make the analysis that I have just commented on. That there are eight goals linked to things which we can't control, that our offensive style, our offensive game has sometimes consequences which causes us to suffer goals.

The question that you asked me had two options. To consume all your time and to bore you with this explanation or to give you a typical response with not a lot of detail.
Back to top
Reply
Replies (5)
OptionsTop
Replies (5)
Share:

re: Bielsa was asked about the state of Leeds’ defense todayPosted by cwil177

re: Bielsa was asked about the state of Leeds’ defense todayPosted by S

re: Bielsa was asked about the state of Leeds’ defense todayPosted by WinnPtiger

re: Bielsa was asked about the state of Leeds’ defense todayPosted by Srbtiger06

to Everyone
Advertisement
Back to top
Mr Personality

re: Bielsa was asked about the state of Leeds’ defense todayPosted by Mr Personality 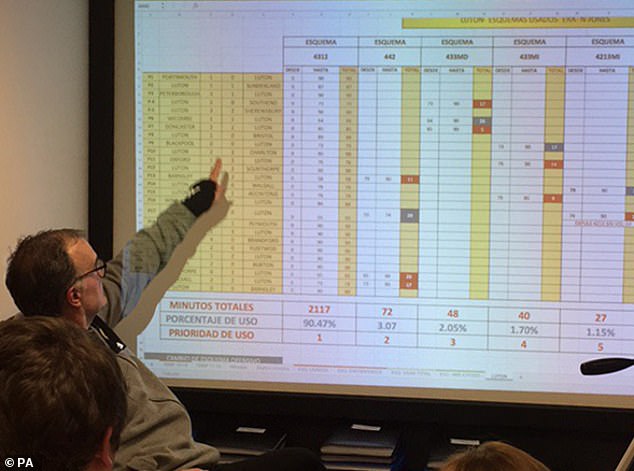 re: Bielsa was asked about the state of Leeds’ defense todayPosted by jackwoods4


quote:
I have to make the analysis that I have just commented on. That there are eight goals linked to things which we can't control, that our offensive style, our offensive game has sometimes consequences which causes us to suffer goals.

re: Bielsa was asked about the state of Leeds’ defense todayPosted by chalmetteowl

re: Bielsa was asked about the state of Leeds’ defense todayPosted by S