1
I grew up a Star Wars fan and only watched the Star Trek movies in passing as my mother was a fan. Decided I am going to run through all of them since I never really watched them. I'd like to hear everyone's take. I'll update this as I go.

Star Trek: The Motion Picture- I felt this one was trying to be 2001: A Space Odyssey. I never watched TOS but it felt like it was trying to be something it never was. It wasn't bad but it wasn't great

Star Trek II: The Wrath of Khan- Cliché to say this but I already know this is the best one. The action was great, Shatner was great, and Montalbano was fantastic. The shot of Moby Dick and the Bible at the beginning were perfect to alluding what was going on in the movie.

Star Trek III: The Search for Spock- This one felt the most like Star Trek. A little cheese factor to it but it had the Star Trek brand of cheese. I didn't know Christopher Lloyd played a Klingon! I think this one is overall pretty good but it follows The Wrath of Khan and anything was going to be a let down after that.

Star Trek IV: The Voyage Home- This one was probably the most fun as the movie didn't seem to take itself very seriously. I did think the story was odd as they have figured out to time warp but I guess it is hey, that's Star Trek
This post was edited on 7/21 at 8:37 am
Back to top
Reply
Replies (6)
OptionsTop
Replies (6)

re: Star Trek Movies RewatchPosted by UndercoverBryologist on 7/20/21 at 9:11 pm to jmarto1
All of the TOS movies are watchable.

I think The Motion Picture has finally received a much warranted critical re-appraisal, and it is no longer characterized as "The Slow-Motion Picture."

V: The Final Frontier is a bit of a mess, but it's an interesting mess. (Shatner couldn't use ILM, who had done the previous 3 Star Trek movies, because ILM was committed to Indiana Jones 3 and Ghostbusters II. AND he had to deal with the Teamsters who sabotaged the crew trucks used for the movie.)
Back to top
Reply
Replies (0)
OptionsTop
Replies (0)

re: Star Trek Movies RewatchPosted by UndercoverBryologist on 7/20/21 at 9:20 pm to jmarto1
The TNG movies are an all-over-the-place mess.

First Contact is probably the best looking one of them. Frakes knew how to handle the action scenes. But the problem is that TNG is almost the polar opposite of an action series.

Generations and Insurrection were thematically more in line with the TNG TV series, but they suffered from poor production value.

(Edit: With Generations (1994), Paramound was originally committed to doing a fully budgetted revamp of the TNG sets and effects. They even went so far as to re-design the uniforms of the TNG crew, which actually made it all the way to the action figures released for the movie: 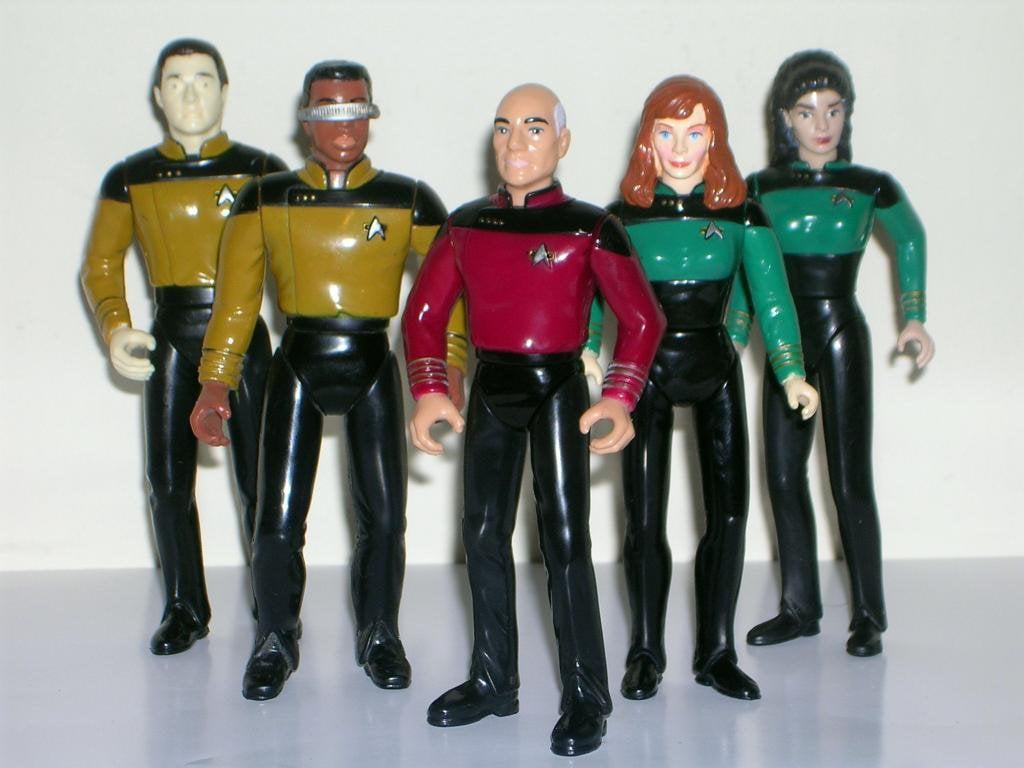 But at some point during production, Paramount decided to get really cheap and cut the budget for the movie by half. This, despite the fact that TNG was one of the most popular shows on TV at the time and ended its run at the height of popularity. It's totally strange why they decided to go cheap with the first TNG movie.)

...As far as the "Kelvin Timeline", I was mildly optimistic for Star Trek (2009) but after Into Darkness (2013), I realized what a hack JJ Abrams was and gave up on it. Fortunately, I had lowered expectations for the Star Wars Sequel Trilogy because of it, so at least I was prepared for the long haul.
This post was edited on 7/20 at 9:32 pm
Back to top
Reply
Replies (2)
OptionsTop
Replies (2)

re: Star Trek Movies RewatchPosted by Boring on 7/20/21 at 9:28 pm to jmarto1
Like you, I grew up on Star Wars and kinda missed Star Trek. I recently saw that Tom Hardy is in Star Trek: Nemesis, which piqued my interest even though I’ve never seen much Star Trek media aside from 2 of the Chris Pine movies (which I liked).

Would it be a faux pas to watch Nemesis as a stand-alone film?
Back to top
Reply
Replies (1)
OptionsTop
Replies (1)

quote:
Would it be a faux pas to watch Nemesis as a stand-alone film?


Many think it's the worst of the bunch.
Back to top
Reply
Replies (1)
OptionsTop
Replies (1)


First Contact is one of my favorite movies period. I’ll fight anyone regarding its quality.
Back to top
Reply
Replies (1)
OptionsTop
Replies (1)

re: Star Trek Movies RewatchPosted by UndercoverBryologist on 7/20/21 at 9:40 pm to UndercoverBryologist
Now that I think about it, the production budget for Generations (1994) was probably severely cut because Paramount was committed to having a movie out by fall 1994 (barely 7 months after the show ended).

Putting that much of a time constraint on the film's production probably necessitated cutting a lot of corners to make sure sets, costumes, and special effects were ready for release by November 1994.
Back to top
Reply
Replies (0)
OptionsTop
Replies (0)

I love this one. It's completely and utterly stupid, but I love it anyway. Catherine Hicks never wears a bra and she just does something for me.

quote:
What about Star Trek IV: The Voyage Home?

I love this one.

In my mind, Star Trek IV invented the quippy banter that is the MCU's bread-and-butter. (No surprise that Kevin Feige is an admitted hardcore Trekkie.)

That movie came out in 1986. Then Shane Black built upon the concept with Lethal Weapon. Then down the line, eventually Marvel implemented it with their dialogue in the MCU. But it started with The Voyage Home.
Back to top
Reply
Replies (1)
OptionsTop
Replies (1)

to Everyone
Advertisement
Back to top
bluestem75

on 7/21/21 at 9:46 am to UndercoverBryologist
Did you miss VI? Brilliant allegory of Chernobyl and the fall of the Soviet Bloc. Brilliant Trek-as-political thriller. And Kim Cattrall as a Vulcan and Christopher Plummer as a Klingon! Great who-done-it, political mystery with great action pieces as well. I like it better than II; it’s more complex and involves the entire Trek universe.

First Contact is Star Trek’s venture into body horror. It keeps the Borg as the menacing, frightening threat they are and doesn’t get too tripped up with time travel elements. Has several make you jump out of your seat scares. The Borg granting Data a flesh and blood experience is a great reversal of how they typically assimilate. It’s by far the best TNG movie and top 3 overall (behind II and VI—IV is fun, but hasn’t aged well).

The 2009 entry is great and feels a lot like Star Trek. It nails the humor, has thrilling action, and is, frankly, perfectly cast. I saw it on a sneak preview and the entire audience applauded at the end. It was one of the best movies of 2009, garnering Best Picture buzz and landing on several Top 10 lists as the year was great for Sci-Fi (Avatar, District 9).

Into Darkness suffers from Abrams trying to hide that it’s a Khan movie to keep that reveal of Cumberbatch’s character secret. He should have just come out and said, “We’re doing Khan in the Kelvin timeline. Deal with it.” I like Beyond. It’s a fun entry but nothing earth shattering.
This post was edited on 7/21 at 9:51 am
Back to top
Reply
Replies (1)
OptionsTop
Replies (1)

re: Star Trek Movies RewatchPosted by UndercoverBryologist on 7/21/21 at 9:48 am to bluestem75

How so? It's probably my personal favorite.
Back to top
Reply
Replies (1)
OptionsTop
Replies (1)

on 7/21/21 at 9:56 am to UndercoverBryologist
The “Save the Whales” plot line is very 80s. The effects haven’t aged well and the feel is more 80s sitcom than Star Trek. The “villain” (probe) is a random choice and never reappears. AND THERE’S NO ENTERPRISE! It feels more like a 2 hour episode than a feature film like II, VI, FC, and 2009 reboot. It’s my #5 behind those but I don’t clamor to rewatch it.
Back to top
Reply
Replies (3)
OptionsTop
Replies (3)

re: Star Trek Movies RewatchPosted by UndercoverBryologist on 7/21/21 at 10:02 am to bluestem75
To each their own, but the fact that it takes a comedic turn and allows the characters to explore 1980s Earth was a much needed turn. Especially after the dour Wrath of Khan and Search for Spock, in which two characters close to Kirk die.
This post was edited on 7/21 at 10:05 am
Back to top
Reply
Replies (1)
OptionsTop
Replies (1)

I think Trek movies do better when they have a singular villain (Khan, Chang, Borg Queen, Nemo). The conflict and tension is more acute.
Back to top
Reply
Replies (0)
OptionsTop
Replies (0)

I'm not going to hold some of your ignorance against you, then.

quote:
Star Trek: The Motion Picture- I felt this one was trying to be 2001: A Space Odyssey.

TMP was a reworking of a TOS script - The Changeling, with dashes of other things familiar to TOS fans. They wanted to show off their upgraded special effects, but there was probably only about an hour of material so the rest seems ponderous.

TWOK is not only the best Trek film, but arguably the best science fiction film ever. Best combination of things. A villain to compete with Vader for title of GOAT - the film just does so many things well with so few flaws that it bears consideration for many "best" lists.

TSFS - is a solid middle entry if you consider II, III and IV a trilogy (which we all do). I also agree it was "most" in vibe to a TOS episode, but many great moments in there.

TVH - a very fun movie in line with some of the fun TOS episodes, without being a straight comedy. A little preachy from an environmental standpoint (they literally "saved" the whales), but didn't hit us over the head with messages otherwise.

Frankly, the only other Trek films really worth watching are VI: The Undiscovered Country and First Contact. The other TNG films are "meh". Nothing since Nemesis is even "Star Trek" other than in name.

Shame DS9 didn't get a feature - the cast was certainly as good as TNG and their writers were more consistent.
This post was edited on 7/21 at 10:26 am
Back to top
Reply
Replies (0)
OptionsTop
Replies (0)

quote:
Generations and Insurrection were thematically more in line with the TNG TV series, but they suffered from poor production value.

So, I liked Generations. Destroying the Enterprise was fine, but I feel like the execution was a bit botched in how it happened.

Insurrection also had a good story, but you're right about poor production value, especially the part where the eject the warp core.
This post was edited on 7/21 at 11:09 am
Back to top
Reply
Replies (0)
OptionsTop
Replies (0)

quote:
AND THERE’S NO ENTERPRISE!

I disagree. There was that one nuclear wessel.

on 7/21/21 at 9:06 pm to GetCocky11
IV showed the chemistry between everyone. I am appreciating Bones a lot more than I ever did now.
Back to top
Reply
Replies (0)
OptionsTop
Replies (0)