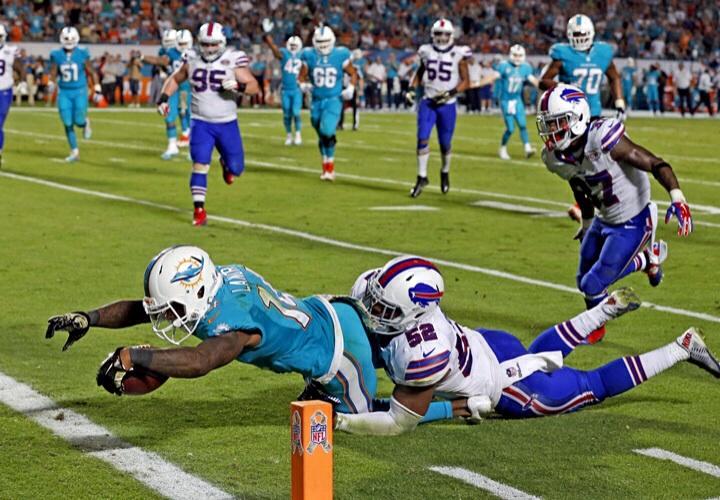 During the Miami Dolphins game against the Buffalo Bills last week, former LSU wide receiver Jarvis Landry wore a microphone to give fan's an idea of some of that chatter that goes on during an NFL game.

Landry caught all five of the passes that came his way, finished with 45 yards and a touchdown. The Dolphins won 22-9, and Landry was clearly amped up all game.

On the season, Landry has 42 receptions for 400 yards and three touchdowns.

0
just getting started, will have a great career in the league.
Reply•82 months

0
Plays and acts like a veteran and leader on the field. That was amazing.
Reply•82 months

0
Robey got abused. I love Landry. Dude played with a lot of passion and skill, and it's paying off for him. Dude worked his arse off.
Reply•82 months

0
Love me some Landry
Reply•82 months

0
Thats great stuff! He's a true leader on the field, even as a rookie. LSU GREAT
Reply•82 months

0
anyone else catch wallace's lack of enthusiasm at the :10sec mark? Disgruntled
Reply•82 months
Popular Stories

LSU DE Andre Anthony Is Out For The Season

LSU's 2022 Football Schedule Has Been Released

Here's Everything Mike Leach Said About LSU On Monday

LSU vs. Auburn Set For Primetime Kickoff In Tiger Stadium

1
LSU's Left Tackle Spot Is An Open Competition At The Moment, Ed Orgeron Says
Cam Wire is out with an injury.

9
Cade York Lands NIL Deal With Velveeta Which Could Lead To Free Queso For Fans
So cheesy.