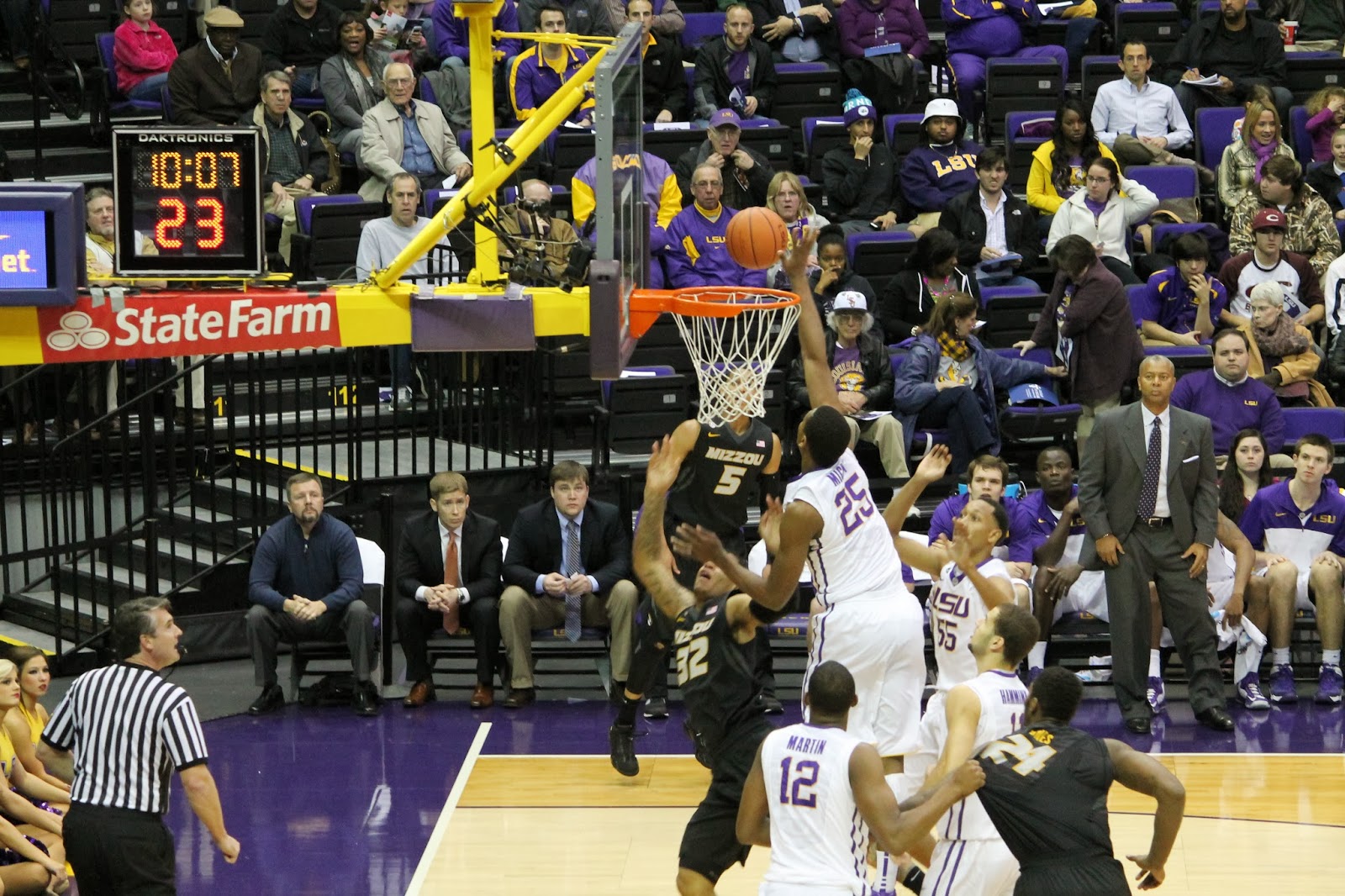 In a game where both teams played exceptional basketball, LSU closed out Missouri late to win 77-71. Coming into the game, Coach Jones knew how explosive the back court trio of Brown, Clarkson, and Ross were. While slowing them down was important, limiting the other players was 100% necessary.

In LSU's loss to Ole Miss it was the unexpected career high of Sebastian Saiz that hurt LSU, but against Missouri that didn't happen. While the Missouri's trio played extremely well, they were all Missouri had. The rest of Missouri's team scored a combined 8 points on 4 of 20 shooting. Brown, Clarkson and Ross did hit 8 of 14 from three point range and score 28, 19, and 16 respectively. Still, LSU played hard, inspired defense on the trio of guards who each stood 6'5".

It was a total team effort. Shavon Coleman had one of his better games as a Tiger scoring 19 points, grabbing 5 boards while also getting 2 assists, 2 steals and a block. But he wasn't the only player with a great stat line. Jordan Mickey played inspired adding 14 points, 13 rebounds, 5 blocks and a steal. Johnny O'Bryant (16) and Andre Stringer (12) joined Coleman and Mickey in the double digit scoring club. But it was what the statistics missed that made this such a great team victory.

Tim Quarterman came in and played some very disruptive defense on Missouri guard Jordan Clarkson. He made the proper passes on offense and set the tone in the second half defensively. At this point there's no time for "freshman mistakes". Quarterman was a vocal leader on the court. He made sure everyone played in the moment.

Jarell Martin had two momentum building baskets. A ally oop lob that got the PMAC pulse going as well as a very clutch putback in the second half that helped push the Tigers lead. This was a team effort and a team win. LSU hit 51.4% of their two point baskets and 31.8% of their three's. They made more free throws (18/26) than Missouri took (11/16). LSU won the offensive and defensive rebound battles. They limited their turnovers and had some of the best ball movement of the season. LSU blocked 9 of Missouri's 48 two point shots (18.8%) and even that was a team effort (Mickey5, Coleman1, Martin1, Quarterman2).

The win pulls LSU back into NCAA contention but don't get your hopes up yet. LSU still has a lot of work to do after some tough early SEC losses. I can tell you that the next stretch of games are critical, but on the bubble, every game is critical.

KenPom moved from 62 to 60. This weekend, LSU faces Alabama on the road in an arena that LSU has struggled to leave victorious. Still, I know LSU will have some fans there thanks to the efforts of the first ever LSU Basketball bus trip and Im hoping the Tigers bring home a victory.
Filed Under: LSU Basketball
Related:
Shareef O'Neal Tweets About His Foot Injury Recovery
Watch: Highlights From LSU's 66-51 Victory Over Ohio
Video: General Wade Was Heated After LSU's Win Over Ohio On Wednesday Night
LSU Remains Undefeated After 66-51 Victory Over Ohio

0
What's the deal with the banana costumes on the front row of the stands? I've been living in a basketball free zone during football season and haven't seen that before.
94 months

0
Was Quarterman more animated than usual? I hadn't noticed that before, but could have just missed it. He had some good minutes last night.

PMAC has been a fun place to be the last two games.
Reply•94 months

quote:
Was Quarterman more animated than usual? I hadn't noticed that before, but could have just missed it. He had some good minutes last night.

It's not overly expressive in what he does. It's more like a foul happens and he makes sure everyone gets in and understands the gameplan. He will go talk to the players in dead time to make sure everyone is on the same page. He runs over to CJJ at free throws to get confirmation on what to do next and relay's it to others.

It's not in an arrogant way, but he shows leadership and poise on the court. Plus his on court smile is something that I will always notice. It looks like he is always having fun out there.
94 months

0
Mickey is starting to make me worry because of how great he's playing. I don't want him to be a 1 and done. Dude is a beast. He reminds me of a shorter version of Ralph Sampson

0
I don't know if the SEC will get 5 teams in the Big Dance, so we desperately need to fight to finish at least 4th.
Reply•94 months

quote:
I don't know if the SEC will get 5 teams in the Big Dance, so we desperately need to fight to finish at least 4th.

Honestly to me, Im really worried that the SEC only gets 2-3... Still a lot of work to do.
94 months

Bowlsby is lashing out, poor guy.

While she is still a student at Notre Dame.

Herbstreit, Desmond, and Pollack all had positive coments.

UPDATE: Mickey Joseph is headed to Nebraska.
LATEST HEADLINES
The College Football Playoff Is Set, Here's The Matchups
Did the CFP committee get the seeding right?

21
Kirk Herbstreit Says LSU Will "Become Juggernaut Once Again" Under Brian Kelly
Herbstreit, Desmond, and Pollack all had positive coments.

10
Video: Grace Kelly Puts Out Funny TikTok Video About Her Dad Taking The LSU Job
While she is still a student at Notre Dame.

39
Report: Tommy Moffitt Is Not Being Retained On Brian Kelly’s New Staff
Moffitt has been as LSU since 2000.

122
Shareef O'Neal Tweets About His Foot Injury Recovery
O'Neal appeared in 10 games for the Tigers season.