on 8/27/21 at 3:31 pm to BlackCoffeeKid
Dude couldn't hit a house, but now that you mention it he will probably be perfect against Spurs.

on 8/29/21 at 9:35 am to ShrevetownTiger
I take it the lack of posting in this thread means most of you are evacuating, if so prayers for you and be safe!
Back to top
Reply
Replies (2)
OptionsTop
Replies (2)

quote:
I take it the lack of posting in this thread means most of you are evacuating


Currently evacuated to Rayne.
I'd be lying if I said I wasn't worried about my people/family in Thibodaux though.

Stay safe everyone.
Back to top
Reply
Replies (0)
OptionsTop
Replies (0)

Tried watching the game on crappy free wifi in hotel but kept going out. Great FK by Son and hey we’re 3-0-0


I feel like Spurs are what they should've been under Mourinho.
Back to top
Reply
Replies (1)
OptionsTop
Replies (1)

on 8/29/21 at 1:02 pm to BlackCoffeeKid
Lol yup. It’s tough to complain about 3-0 but we are definitely going to need a playmaking type in the midfield this season. Love what Dele PEH and Skipp are giving us defensively though.

To close out the window I think we need to do 3 things.

1. Move out Serge and replace him with a legit RB option. We all know Doherty doesn’t have it.

2. Move out Ndombele and replace him with a progressive ball carrying type. Doesn’t have to be a guy that starts every match but does need to be very offensive minded when he does come on. Don’t care about the defensive side of it.

Anything else we do is a bonus (Traore or another CB). However I think the 3 moves above gives us a real shot at 4th
Back to top
Reply
Replies (0)
OptionsTop
Replies (0)

quote:
Fabrizio Romano @FabrizioRomano · 40m Tottenham and Barcelona have reached an agreement for Emerson Royal on a permanent move for €30m add ons included. Emerson has accepted Spurs as next club - still details pending on personal terms to complete the deal. Talks ongoing. 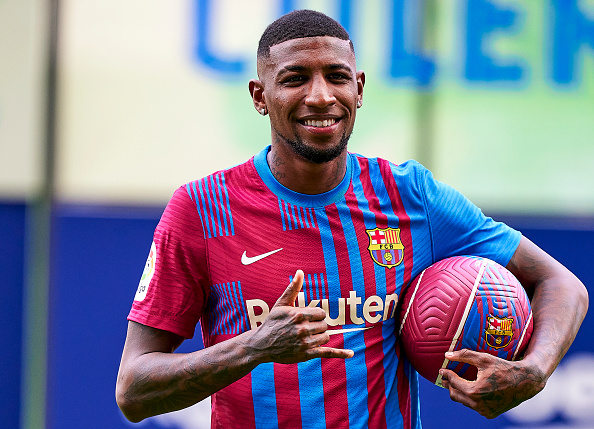 on 8/30/21 at 4:38 pm to PhillyTiger90
There’s one domino. It’s looking like our hopes for midfield improvement hinge on Ndombele getting his shite together, unfortunately. And we’re very thin up top. Less concerned about the wings than I am about striker though.
Back to top
Reply
Replies (1)
OptionsTop
Replies (1)

on 8/30/21 at 7:46 pm to TideCPA
Ndombele’s lack of hustle really pisses me off. He’s an incredible player that does things I’ve never seen other players do and if he would put in the effort he could frick off to Bayern or whatever he wants to do but no one wants to buy a player that has shown no effort under multiple managers.
Back to top
Reply
Replies (1)
OptionsTop
Replies (1)

on 8/30/21 at 9:01 pm to Special K
Fabrizio Romano said Emerson is a done deal on his podcast. Paratici has done some amazing work so far getting rid of dead wood and adding quality players for the near and long term
Back to top
Reply
Replies (1)
OptionsTop
Replies (1)

We aren’t gonna rebuild the squad in one window so even if this was it I would be ok. We added 2 starters, a dynamic sub with big potential to grow into a starter role, a young backup GK, and a really highly rated young player with a built in loan/first-team football. Add in the experience Skipp and Tanganga are getting this season, the new contract for Sonny, and not selling Kane to the league champs Bottom line we are better today than when last season ended and we actually look like we have a plan.

In Paratici we trust!

re: Tottenham Hotspur 2021/2022 Season Long Thread: Prince Harry Stays EditionPosted by MattyV on 8/31/21 at 1:31 pm to MattyV
The fact that not a single club came in for Aurier with 12 months left on his contract and the club desperate to get rid of him should confirm everything Spurs fans thought about him.

I really like the addition of Emerson and think he can provide a little more attacking threat in games where we need more numbers going forward. Japhet has been great to start the season, but he doesn't offer much going forward. I also think adding Emerson will free Japhet to get some minutes at CB when we need rotation.
Back to top
Reply
Replies (1)
OptionsTop
Replies (1)

on 8/31/21 at 3:10 pm to MattyV
Not getting a proper backup striker, and having 4 right backs now has me disappointed in the window. Shipped out some of the deadwood, but not enough imo.
Back to top
Reply
Replies (1)
OptionsTop
Replies (1)

quote:
Serge Aurier is in negotiations to be released from his last year of contract with Tottenham.

Nobody wanted Aurier and the clubs that were interested he rejected. If anything I give Paratici and Levy credit for bringing Emerson in knowing that they couldn't get anything for Aurier.

I agree with you on the backup striker. Given the financial strain of coming off a season with no fans, I think this window was pretty good and would have been perfect with an ACM and Striker.

I wouldn't be shocked to see them in the market for a backup striker in January.

All in all it’s not a bad window at all. Defense has been upgraded BIGLY since last year. Would’ve liked a backup striker but between Kane & Son we’ll be okay until the winter window. Here’s my preferred Starting XI moving forward. Def think it’s Europe worthy but with a little luck could be Top 4

quote:
Serge Aurier is in negotiations to be released from his last year of contract with Tottenham.

I missed this, and it’s now official. Makes me feel a bit better, though I’d rather have Aurier than Doherty, but not at the expense of an unhappy player in the locker room.

Maybe with Aurier, and Sissoko leaving it will now force tanguy’s bitch arse out of his comfort zone, and have to integrate with the rest of the squad. If nuno could get him to give a shite it would be massive. There’s nobody else like him in the squad at the moment.

If ndombele is content to not play at all, and just collect a paycheck, he’s an even bigger piece of shite than I thought.

I REALLY REALLY wish they had gone in for Danny Ings. I know he’s not the youngest, but his fee to villa was pretty small from what I remember.
This post was edited on 8/31 at 7:48 pm
Back to top
Reply
Replies (1)
OptionsTop
Replies (1)