Would you consider a planar speaker like Maggies or Martin Logan? They can be really addictive when set up correctly.

Of course there are a lot of excellent choices in that range from Revel, KEF, Aerial, Vandersteen, Goldenear (among brands I've heard) and others.

Years ago I had a pair of VMPS RM30 towers - RM for "ribbon monitor" being an oxymoron lol - and they were amazing for the price, but I didn't have room after getting married and had to part with them. VMPS went defunct years ago but there is a brand I've always thought somewhat similar, Legacy Audio. Legacy seems to have gone from strictly internet based to a few select dealers. Here's something that might blow you away: Legacy Aeris demo pair for sale
Back to top
Reply
Replies (2)
OptionsTop
Replies (2)

on 4/27/21 at 2:05 pm to pheroy
The only thing about the planar speakers is that they generally need a LOT of space and work on placement. They also usually greatly benefit from being paired with a subwoofer. Some great suggestions there and I'd add Dynaudio to the mix, particularly Confidence and Contour series.
Back to top
Reply
Replies (0)
OptionsTop
Replies (0) 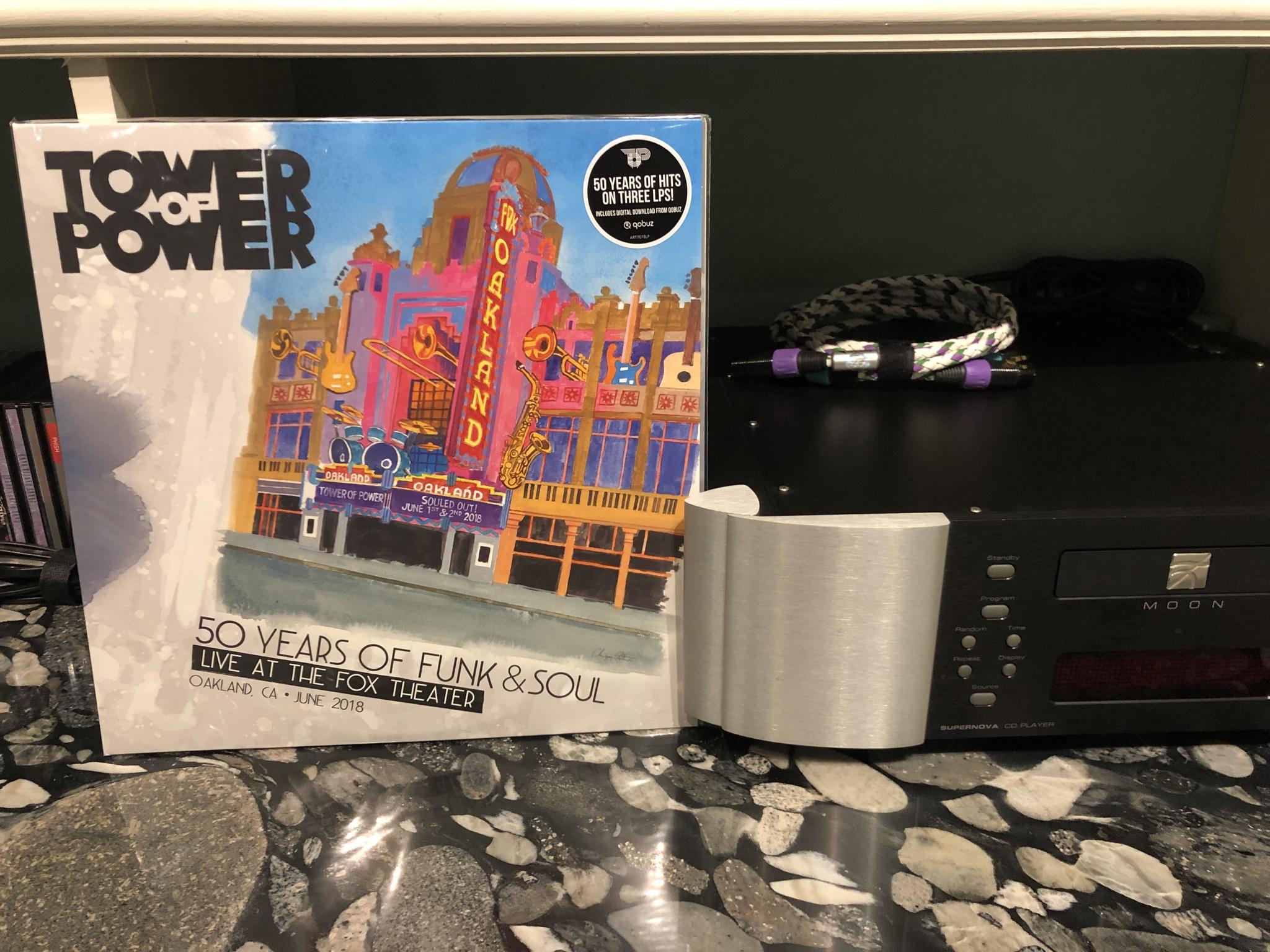 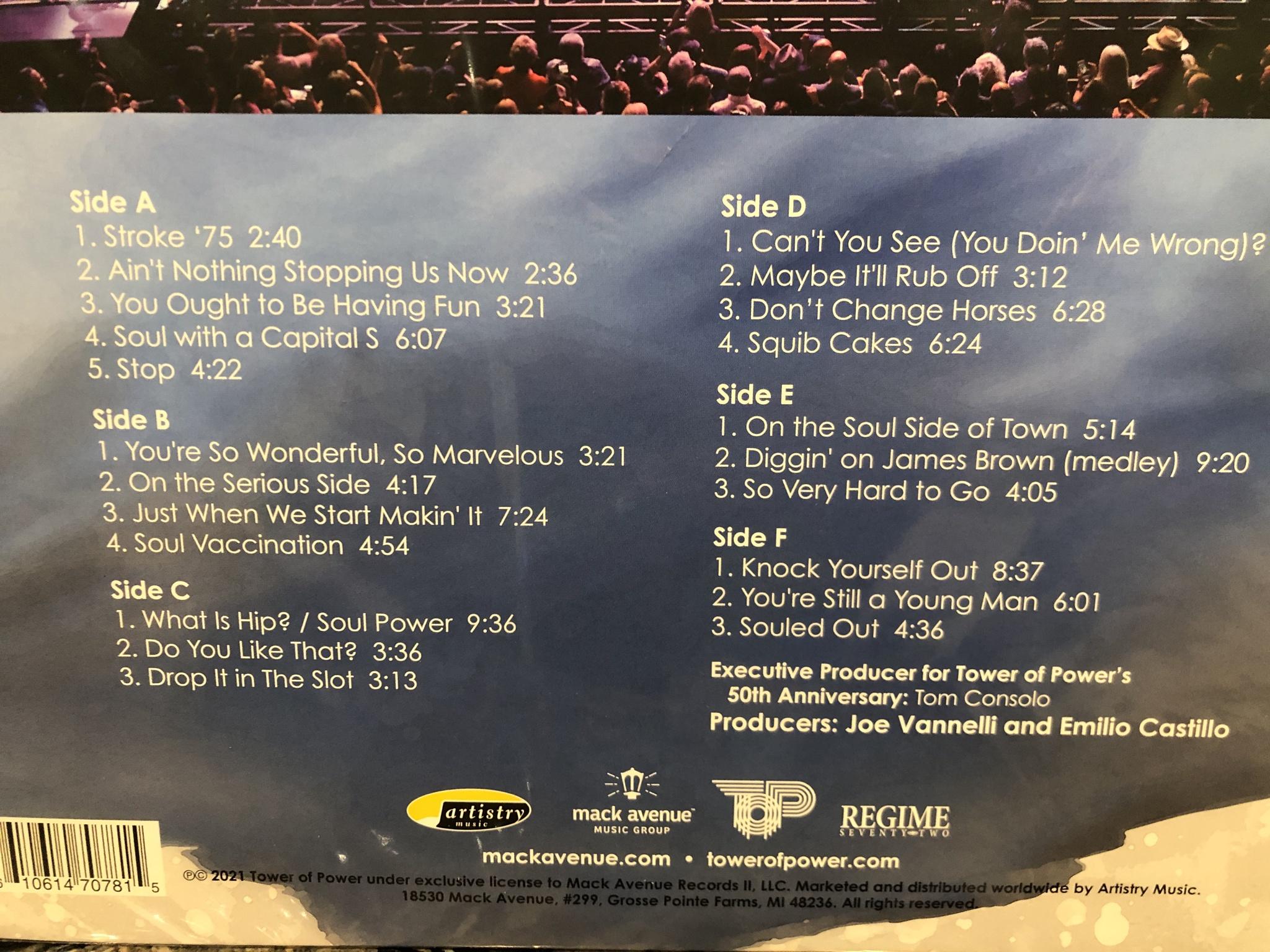 Maybe I’ll get a chance this evening to give it a listen...

quote:
Assuming you get +/-$12K for the B&W if traded in to a dealer, what is your total budget for a new pair?

I can get 17k from my dealer for them. I am looking to go around 25k per pair. I am in Birmingham.
Back to top
Reply
Replies (0)
OptionsTop
Replies (0)

quote:
Would you consider a planar speaker like Maggies or Martin Logan? They can be really addictive when set up correctly.

I have fiddled with planars before. Wasn't really my cup of tea given the music I listen to. Awesome suggestion though.

I think being blown away is all about imaging and soundstange with a punchy sound that is great for rock & roll. 70's hard rock through 90's alternative. I do love my B&W's, but they def have a house sound which tends to be extremely cold and analytical. They are great for mixing music.
Back to top
Reply
Replies (3)
OptionsTop
Replies (3)

on 4/27/21 at 8:13 pm to ever43
You really need to audition some Dynaudios. In your price range they have amazing speakers.
Back to top
Reply
Replies (0)
OptionsTop
Replies (0)

quote:
I am looking to go around 25k per pair. I am in Birmingham.

Oh, snap. I looked up the Focals you mentioned and thought I saw them at around $12k so my suggestions were the wrong models / price class.

You really need to look at the Revel Salon 2s and KEF Blade 2 in that price range. I haven't heard those, only lower models but the lineage and reviews are stellar. The KEFs with the concentric tweeter/mid have a rep for outstanding soundstaging. Of course the Magicos are really highly rated/reviewed, I've never heard any of them though.

Legacy Audio Aeris or Whisper worth a look.

quote:
I think being blown away is all about imaging and soundstange with a punchy sound that is great for rock & roll.

Obviously, planars excel in soundstaging. I've had the ML Summit X for a few years now and the things they can do in terms of creating a 3d, "you are there" soundstage are awesome. For the right recording - especially live - sitting near field can be an out of body experience.

In your budget, the Martin Logan ESL 15a is right there and they have a lot more dynamic ability with a powered 12" woofer. Maggie 20.7 is in that range but would need a serious and high powered amp to rock hard.
This post was edited on 4/27 at 10:06 pm
Back to top
Reply
Replies (1)
OptionsTop
Replies (1)

The Simaudio Evolution “Moon” CD player (in the pic in my earlier post on this page) was purchased from Mike Blair at Audio Forest back in 2006. I would stop by and shoot the shite with him whenever I was passing through B’ham. When playing Redbook CDs, it is better than the current MCT450/D1100 combo—and it is 10 years older.


Ever43–you obviously are a person with the means to easily take a weekend trip, so I will advise you to go to Rocky Mountain Audio Fest this year. It is October 8-10. Just about every audio manufacturer from gear to media to tweaks, and even snake oil are there. I go almost every year with a group from NOLA/Houston and have a blast. We hit guitar shops, nice local bars and restaurants, and last year caught STS-9 at Red Rocks (spur of the moment thing).

Also, Johnny Yipp, owner of 3mA Audio in Houston, forked out big for one of the grand ballrooms this year in which to exhibit all the stuff he carries. The last few years it has been Apex Audio out of Denver.

Also—you may want to make a trip to Houston to check out 3mA Audio website and facePage. When I first went 3 years ago, he was in a pretty cool older house in the Montrose/Hyde Park area just next to Midtown. The upstairs was messy and used for storage, but the downstairs was nice. He was mainly a Fine Sounds dealer (McIntosh, Audio Research, Sonus Faber, Sumiko).

Since then, he has exploded (he works his arse off). He began to regularly buy mega systems at estate sales throughout Houston—most of it current high end gear or really classic pieces (it helps to be in a wealthy city with 8M people). He has a vintage room and a full time repair person.

The fella that built my racks Tate @ Custom Isolation Products is located in Houston as well, and he custom makes just about every system rack for the store displays and most of their customers.

He has the MBL Extremes on the floor, and usually has not only the lower, but also mid and upper tier products from all of the brands mentioned above. The upstairs is now dedicated to home theater.

He will trade in anything, and usually deliver within a couple states for bigger items. Here is a LINK to The Audiophile Junkie YouTube video of the installation and delivery of my friend’s MBL 101E a few months ago in Metairie (there is a Part 2 as well). The Audiophile Junkie is one of our old friends (from NOLA—moved to Houston after Katrina). He has a slew of videos shot at 3mA, and is the owner and designer of Apex Designz music servers.

Johnny Yipp will also usually knock off 20% on just about everything—stuff doesn’t sit around—it moves quickly. My friend who bought the MBL 101E traded in a pair of Lumen White Artisan ceramic loudspeakers, Ayon Orthos-2 monoblocs, Ayon Spheris preamp, and a pair of SVS 13’ subs—about $75K of stuff...when Johnny left New Orleans headed back to Houston on Sunday, he had all of it sold by the time he hit LaPlace.


My advice: take a weekend trip to Houston or go to RMAF in October. A couple years ago I bought a pair of speakers I never heard of before (Audio Solutions)—I discovered them at 3mA, as he was only 1 of 2 dealers in the USA for them at the time (Audio by Oz in Los Angeles is the importer for Audio Solutions as well as Vitus Audio). You may discover something you never had on your radar.

quote:
Oh, snap. I looked up the Focals you mentioned and thought I saw them at around $12k so my suggestions were the wrong models / price class.

Marco, that's quite a jump in prices, and precedes some of the price increases in some areas that seem to be covid related. High end pricing seems to have no upper limit, even in a time where thankfully there seem to be several companies focused on high quality at reasonable prices. (Schiit, Emotiva, etc.)

I looked up Audio Solutions and now I know what the Figaro XL is. I had been trying to identify the speakers in the photo you posted in the sub thread on the TF, without success and now I know why. I've seen basketball players from Lithuania but that's the first Lithuanian speaker I've seen! The look is a bit generic but clearly at the benefit of focusing on the materials and engineering to sound good.
Back to top
Reply
Replies (2)
OptionsTop
Replies (2) 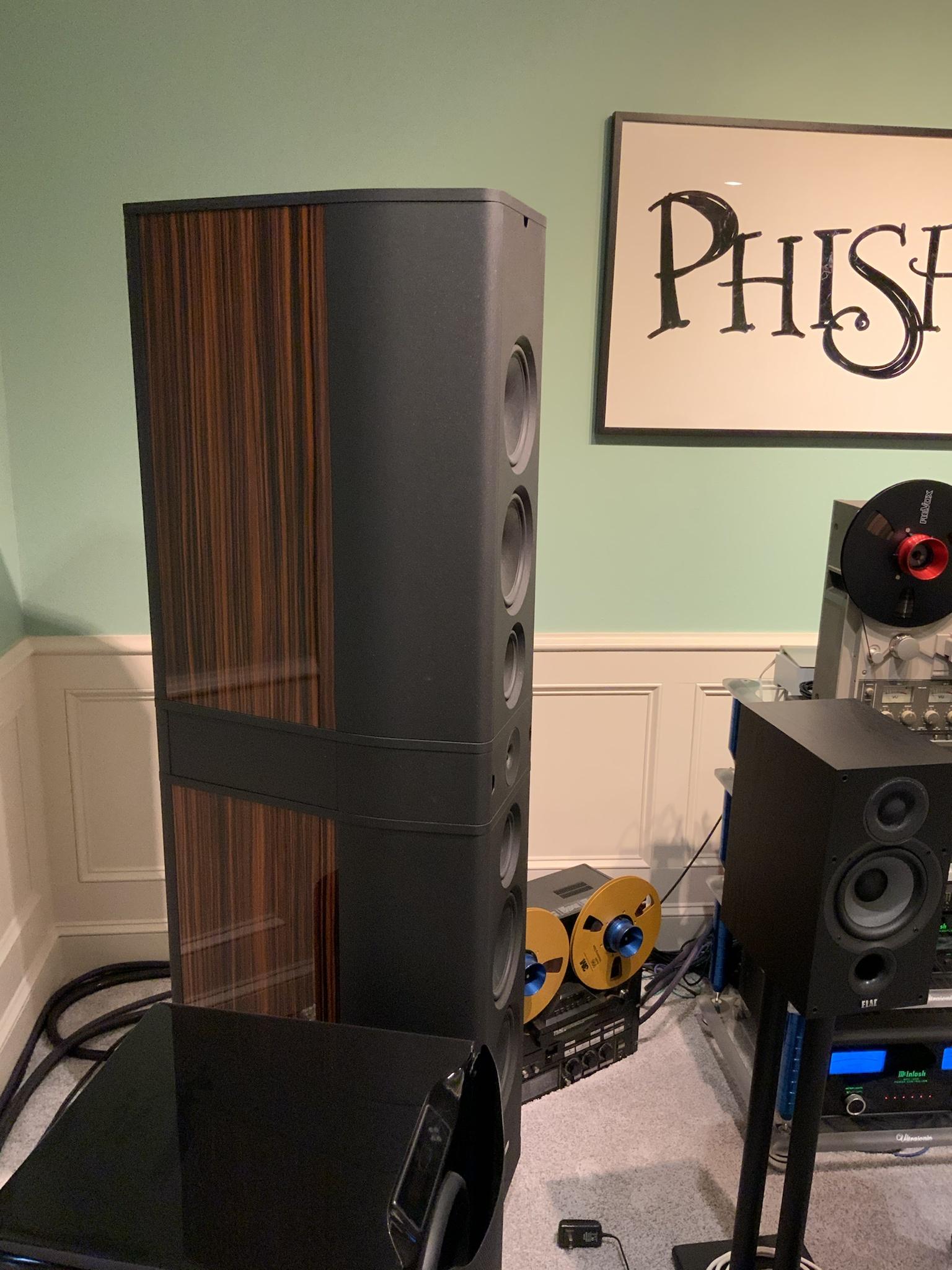 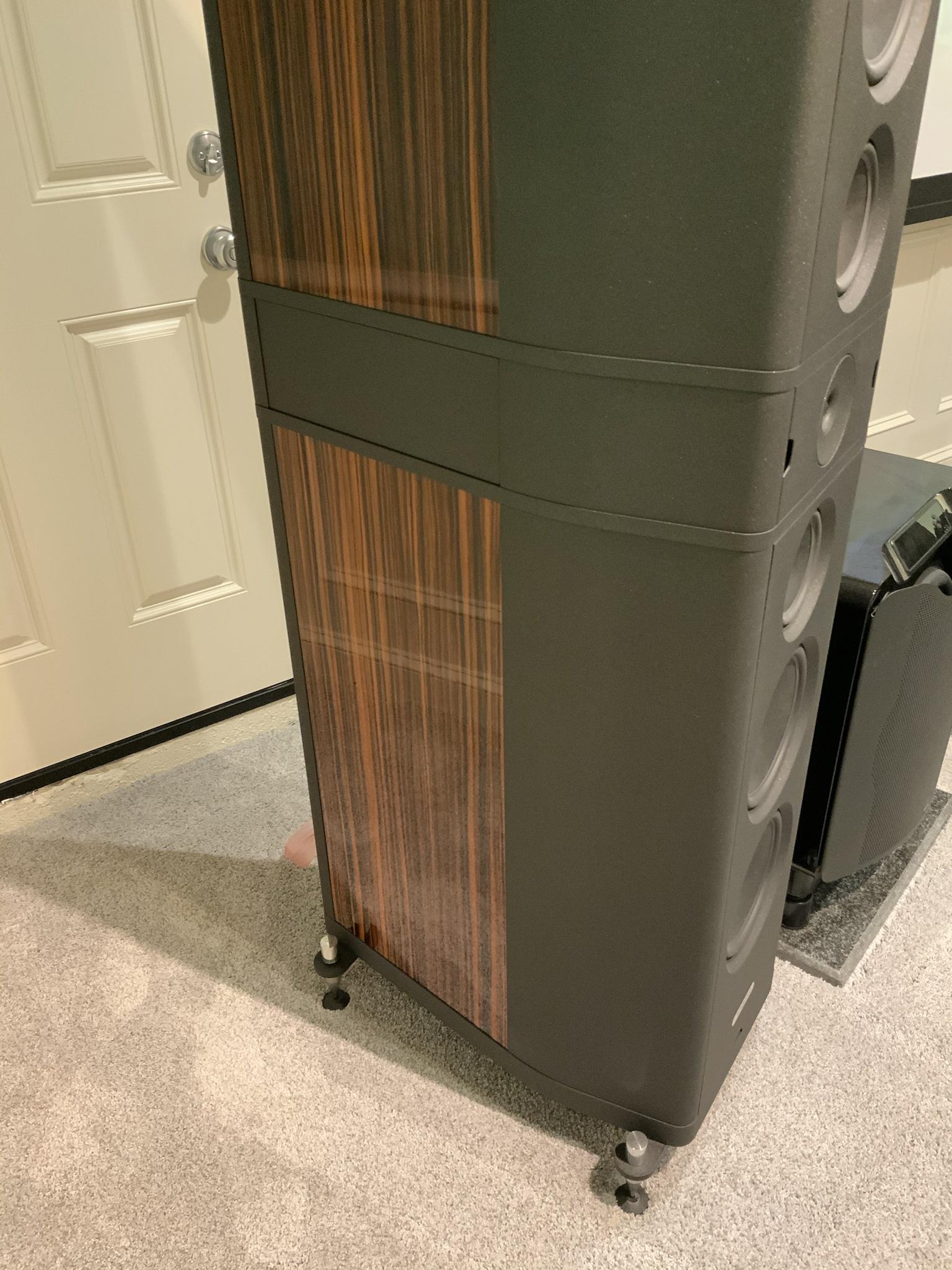 It almost looks like a tab you can pull open with your finger.

I saw where the designer admitted he forgot about folks like you with carpeted floors in the initial design, and had to get a sturdy outrigger made by a company from Cyprus. Not a big deal and obviously you have it, it's just interesting and a bit funny how practical details like that can creep up on smart engineers.
Back to top
Reply
Replies (0)
OptionsTop
Replies (0)


Anyone here actually ever put ear to Emotiva speakers, amps, or pre/pro?

I’m half considering some minor upgrades to one of my systems (want to swap some hang-from-ceiling Bose speakers to either Focal Dome or Bowers m1) +/- swap some rectangular in-ceilings to something a bit better than some no-name contractor grade guys that are in there now (currently the hangers are L/R and the in-ceiling are my “atmos” height channels). In doing this, one thing I’d like to do is upgrade my power (there’s another post I made about this on the Tech Board...I think my Marantz receiver is starting to have a power amp failure, though it’s been less noticeable lately).
I was looking at rack-mounted power amp and pre/pro, and I came across Emotiva as sort of the only thing in its price range for a rack-mount 9-channel amp and then (eventually) a rack-mount pre/pro. I want to clean up the cabinet it sits in but also not give the wife sticker shock.


Is emotiva, in short:
1) entry level stuff that you sort of have to find by searching that generates a bit of excitement that gives the listener a slightly higher opinion of it than it deserves?
2) truly some nicely-priced stuff worth what they ask for it?
3) cheap Chinese junk that’s marked up that no one would buy if they heard it first?
4) something else?
Back to top
Reply
Replies (1)
OptionsTop
Replies (1)

on 4/29/21 at 3:03 am to Marco Esquandolas
Also...check out the new Adcom amps. I had a couple back in 1991. The company is back under new ownership and building decent stuff.
Back to top
Reply
Replies (1)
OptionsTop
Replies (1)

on 4/29/21 at 12:28 pm to VABuckeye
Adcom - brings back memories! First high quality system I put together was an Adcom GFP-555 preamp and the legendary GFA-555 amp, with Mirage M3 speakers. Had that setup for quite a while, and it was fantastic.

Re: Emotiva. I have a little Emotiva integrated amp. Cost me $400. It's very solidly built, nice heft and a nice design. I don't use it much as it's essentially been replaced for secondary / computer use by a set of Audeze Mobius headphones. Emotiva's gear is definitely considered well made and high bang for the buck. They had some issues bringing out their high end surround processor due to (from what I understand) 3rd party delays, software etc that gave them a bit of a black eye but their amps seem to be very highly regarded.
Back to top
Reply
Replies (2)
OptionsTop
Replies (2)

Mirage M-790, later upgraded to the M3. The M-790s are still at my parents house and work beautifully. I still have my dad’s Adcom GTP 500 (in black) on a shelf in my audio room.

Man I wish I hadn’t given away the old white gear!

Here is an old pic of the white amp from about 15 years ago—I used it to power rears in a 5.1 setup...I just bought the Focal Utopias in 2004 (still have ‘em, along with the McIntosh MC2105, and all the Rotel gear too) 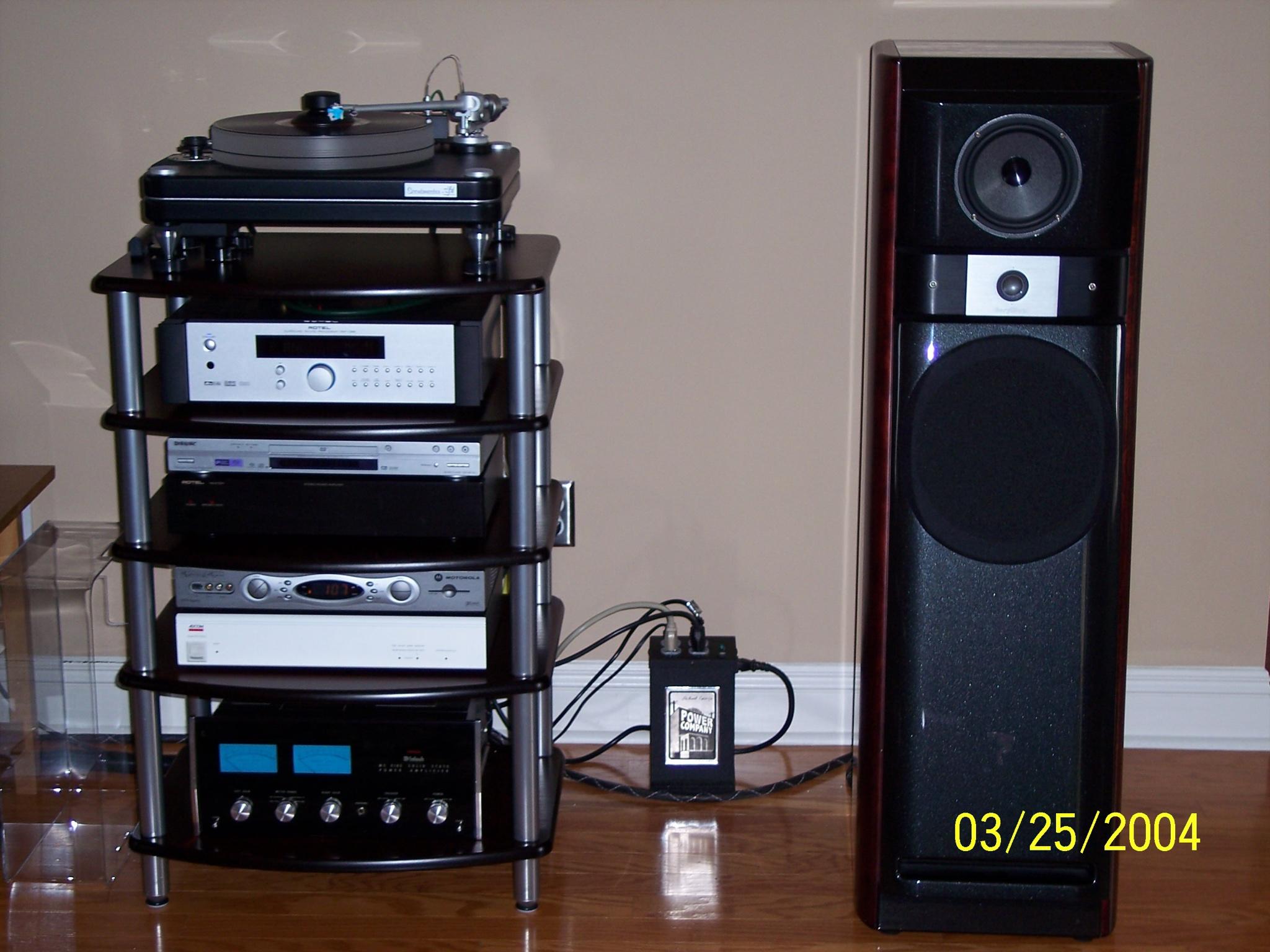