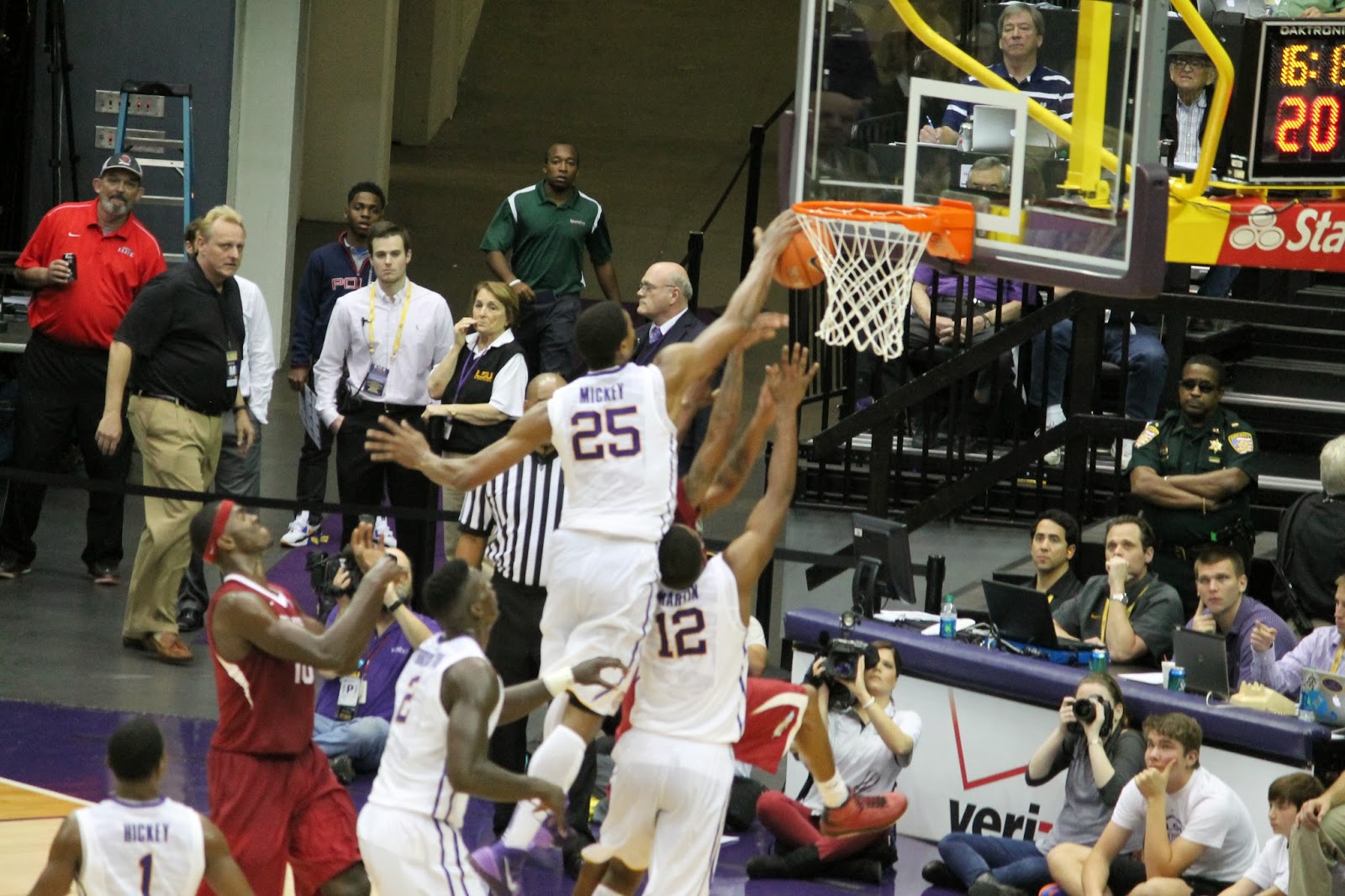 LSU's Mickey, Martin and O'Bryant scored 60 of the Tigers 88 points to help push the Tigers to 5-3 in the SEC after their victory over Arkansas. Andre Stringer scored 10 points off the bench for the Tigers and Anthony Hickey led the team with 6 assists. LSU was also able to hold Arkansas to 74 points, 8 points less than their season average using a very active 2-3 zone.

The Tigers really won in every category. The Tigers shot 44% from three point land to Arkansas' 27%. LSU shot 58% from inside the arc while holding Arkansas to 37% from inside the arc. LSU outrebounded the Hogs by 12 and had a 22:14 AST:TO ratio to the Arkansas' 7:10 ratio. The one bright spot for the Razorbacks was their free throw shooting there the Hogs shot 25/27 for 93%.

Jordan Mickey had one of the most dominant performances of the season for the Tigers. He scored 22 points, 11 rebounds, and 6 blocks. Johnny O'Bryant had another great game as well getting 23 points, 9 rebounds and 4 assists. O'Bryant and Mickey showed some great chemistry passing to each other really causing the Razorbacks problems.

LSU has played 5 straight impressive halves of basketball, especially on offense. After scoring 57 points in the second half at Alabama, LSU scored 87 against Kentucky and 88 against Arkansas. LSU will need to continue their hot ways against UGA on Thursday in Athens.

I saw that and was lovin it.

Im gonna hastag blockparty like its my life. :lol:

Mickey has moved up pretty quickly to 3rd in the NCAA in blocks. He is only 0.02 blocks/gm away from 2nd in NCAA.
94 months

0
Awesome game, total domination. Our starting lineup of Anthony Hickey and four VERY athletic forwards is a serious force to be reckoned with in the SEC. And good lord Mickey pities the fool who dares try to dunk on him.

0
What was the announced attendance? There were a good bit of people in the upper level :nana: :nana: :nana:
Reply•94 months

quote:
What was the announced attendance?


It's good to see consistency as of late. With upcoming games against @Georgia, Auburn, @A&M, @Ark, and Miss St...the Tigers have a chance to put together a nice run with these very winnable games.

0
O'Bryant looks like a monster. Man I hope Martin and Hickey stay next year.
Reply•94 months

0
Dont think you have to worry about hickey
94 months

Johnson started in every game this season.

Wilson is back home.

Love to see it.
LATEST HEADLINES
Breaking: Florida Is Expected To Hire LSU’s Corey Raymond
This one hurts.

13
Photos: Brian Kelly Has Hit The Recruiting Trail
Love to see it.