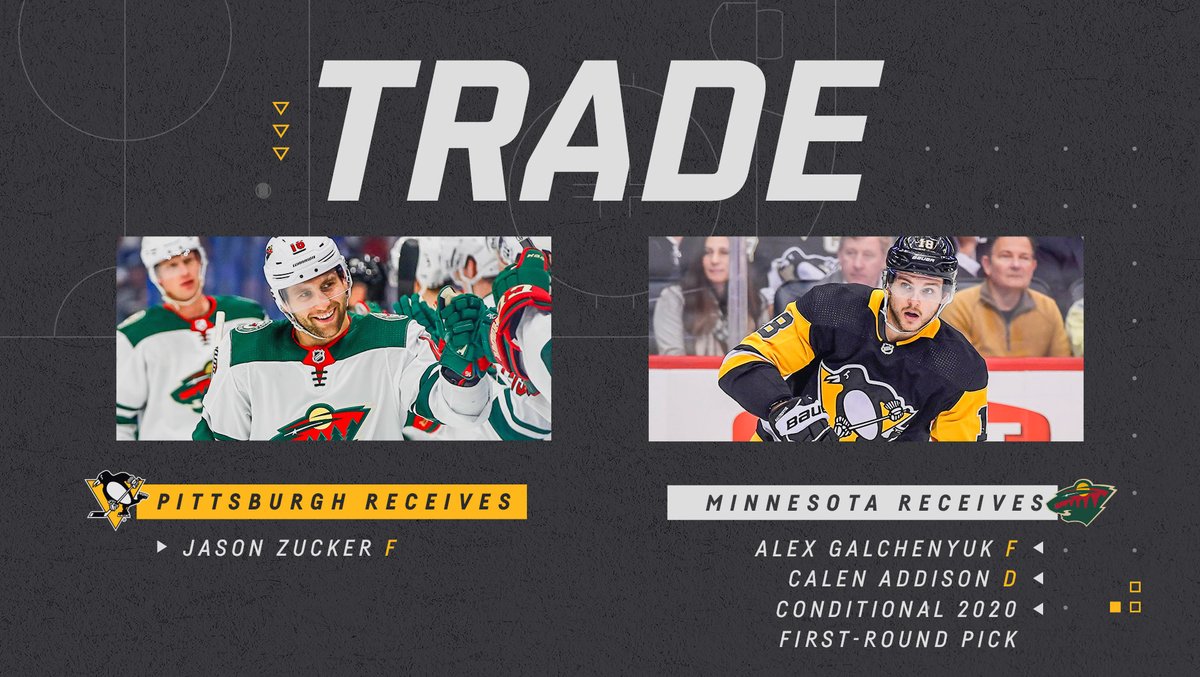 
Seeing nothing but A grades for both sides. Scratch that, ESPN A- for Pens and B+ for Minny.

quote:
But Zucker shot 14.9% that season. He's shooting 18.7% this season. He's a goal scorer who's likely going to slide in on Sidney Crosby's wing. This should be fun.

Zucker has been an under-the-radar standout for the Wild. Over the past three seasons, he has been their second-best forward when measured by goals scored above average per 60 minutes (0.604). He was also second on Minnesota in individual expected goals rate at 5-on-5 (34.58) for the past three seasons. His contract was signed after a 30-goal season and could look like a bargain if Zucker gets back to that level while playing with Crosby or Evgeni Malkin. A $5.5 million cap hit through 2023 gives the Penguins a level of cost certainty, as well.

Since Zucker doesn't have a no-move clause, Pittsburgh could also use him as Seattle expansion draft bait should the need arise. He's a solid player, a solid citizen and a much better investment than the rental wingers on the market. General manager Jim Rutherford finally gets his man, and the cost -- while potentially heavy, depending on prospect development -- certainly doesn't harm the current roster.

He may not even be in the NHL next year. Or if he is it will be on the cheap.

Minnesota is trying to rebuild. And a big part of that is getting Kaprizov over to the NHL.
Back to top
Reply
Replies (2)
OptionsTop
Replies (2)

on 2/11/20 at 7:48 pm to Mr Personality
Razor just compared the Hurricanes coach to Coach O

on 2/11/20 at 9:43 pm to southernelite
Jay Bouwmeester just collapsed on the bench.
Back to top
Reply
Replies (1)
OptionsTop
Replies (1)

An NHL security just told me that the St. Louis Blues and Anaheim Ducks have agreed to postpone tonight's game. Obviously major concern regarding Jay Bouwmeester.

"I’m 3 rows behind the bench and thought I just watched him die. He literally gets off for a shift, and just falls lifelessly. Thank god the medics got to him in like 30 seconds. He was blinking as they took him to the locker room. Scary shite. Whole building is shook."

"They were performing CPR on him. He was completely out."
Back to top
Reply
Replies (2)
OptionsTop
Replies (2)

on 2/11/20 at 10:23 pm to Mr Personality
Jaime Benn gets awarded a goal after getting tripped up in the way to the empty net.