0
So, in 2016 I did some work for my father and wanted to pay me. The man put me through college so I had no intention of charging him anything, but I had made him a pretty good bit of money and he insisted. So I decided to build a smoker and gave him a shopping list. He still got a good discount on my work (about 80% less than what I would have charged anyone else) and he was happy that it would be a project that he could help with.

After making some more detailed drawings, I started work in December, 2016, building from the inside out. This was going to be a double/triple wall insulated, vertical, reverse-flow, all-stainless smoker with a two-rack warming bin.

I have made two previous versions of this smoker for friends, and a mini version for myself, but they were made out of mild steel. Taking the lessons that I learned from those builds and an epiphany as to the correct interior dimensions, I began my project.

I bent the rails myself and, if I had to do it over again, would have used angle. 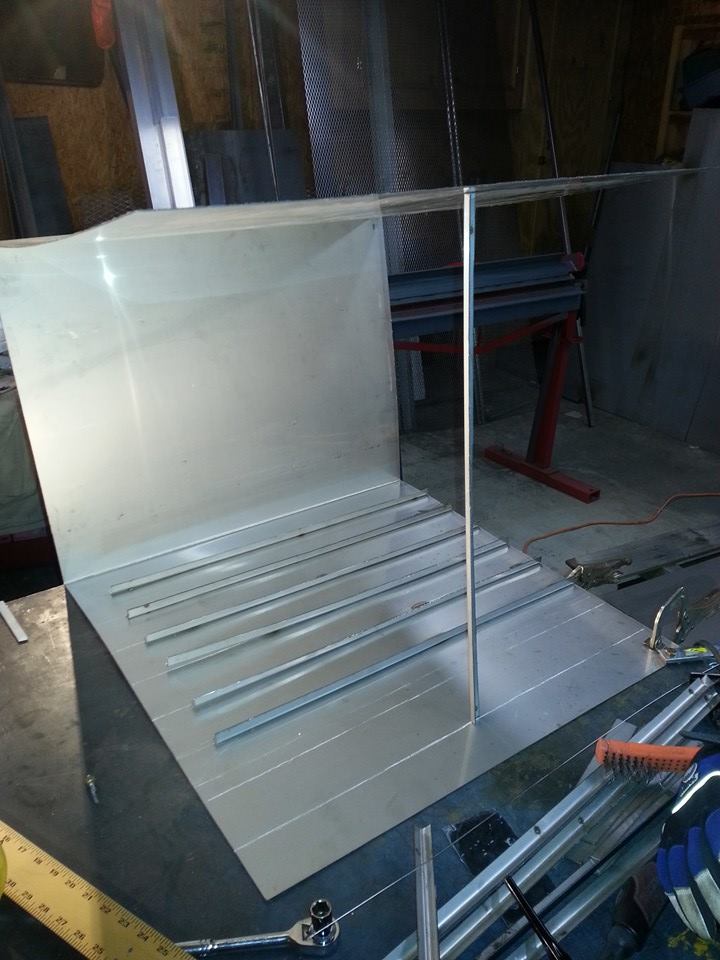 I wanted to bend the cook chamber rack so that I wouldn’t have seams that could leak fat into the firebox. I was new to tig welding (this would be my first project using that process) and wanted to eliminate any unnecessary welding. I was also new to a bending brake and would learn my first lesson about learning how to bend during a build.

With this build I wanted to eliminated as much metal to metal contact between the inner and outer skin of the smoker and decided to only frame the front of the smoker where the door hinges and gaskets would contact the smoker body. 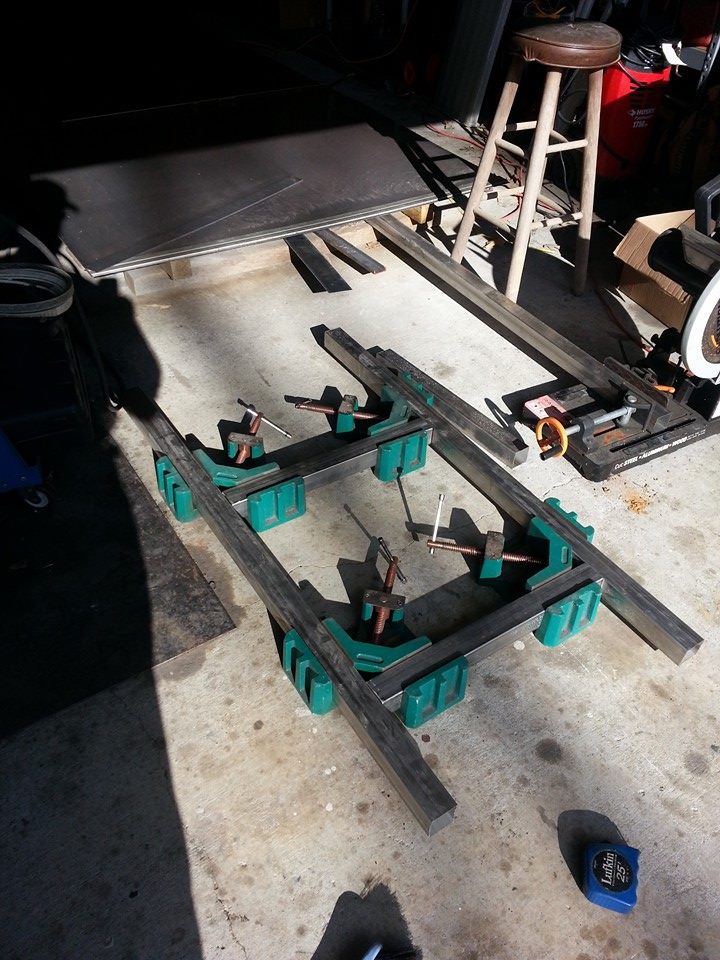 Frame is 2” stainless square tube with top and bottom crossbars (not shown) in 1” tube.

This is where I learned my lesson about learning how to bend while doing a project, doing things out of order and others; the rack didn’t fit in the frame. It was off about 1/8”. With metal, it might as well have been a mile. So this is what it looked like when I started welding the now cut-in-half into the frame. 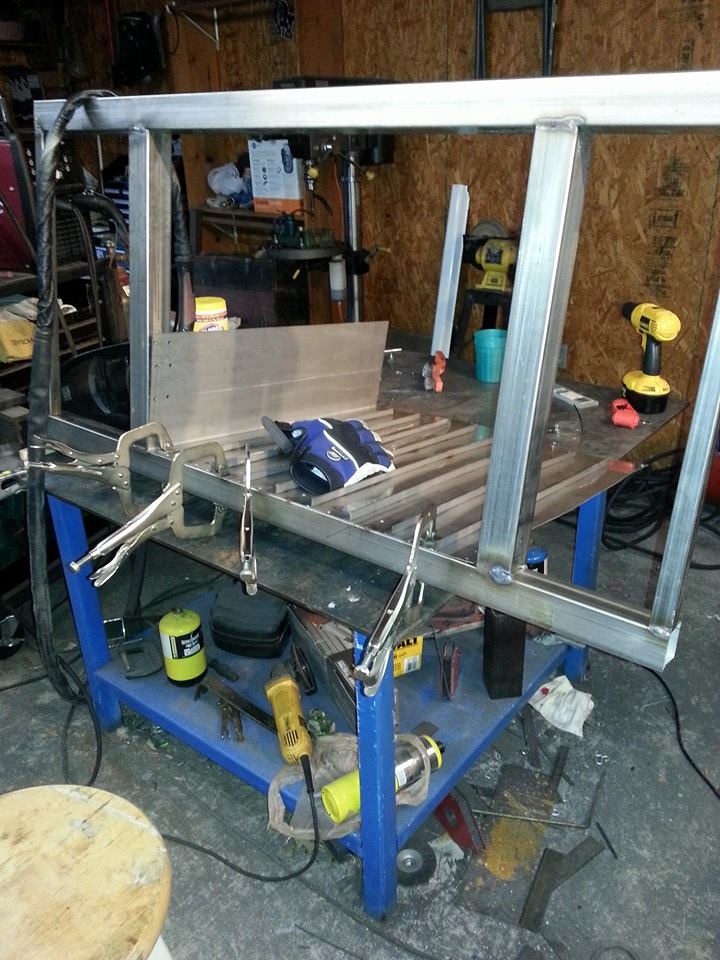 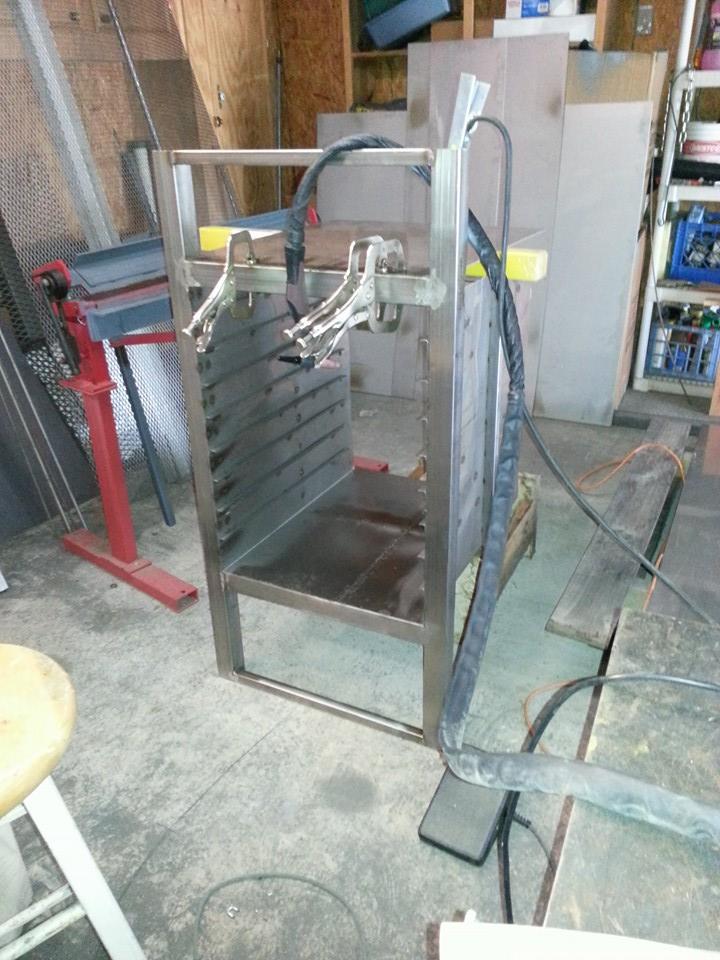 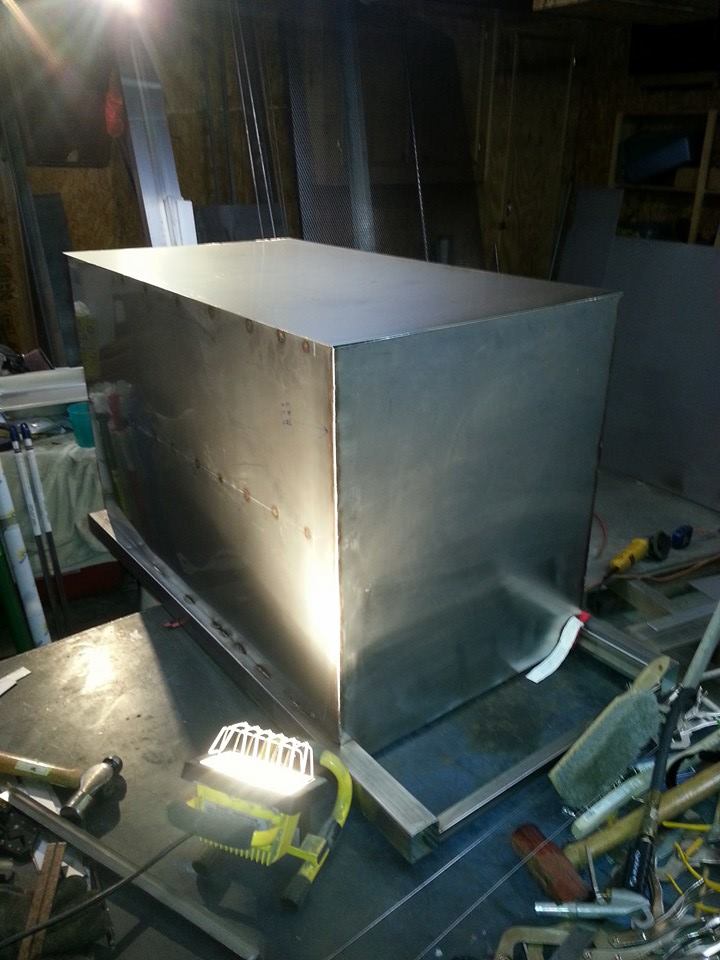 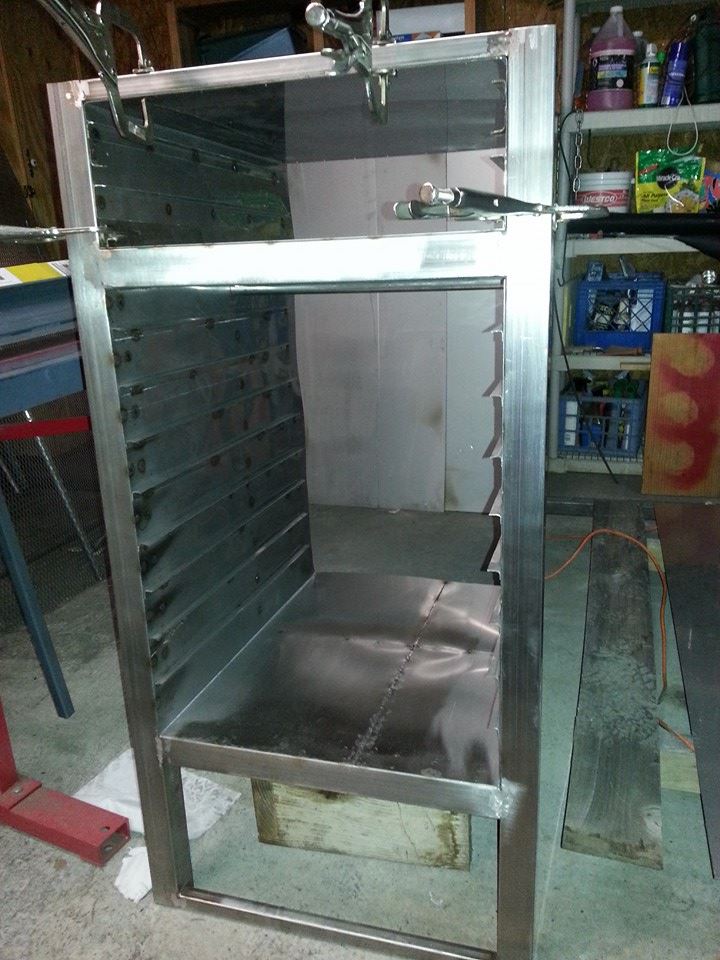 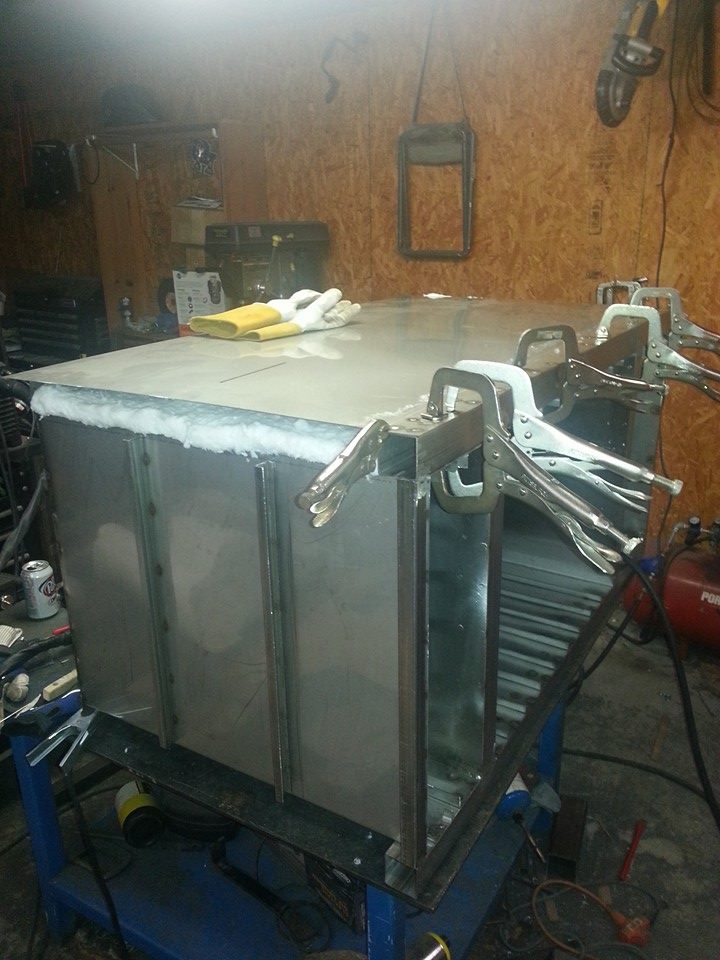 This pic shows the insulation on the top of the warming bin just before the top was put on. 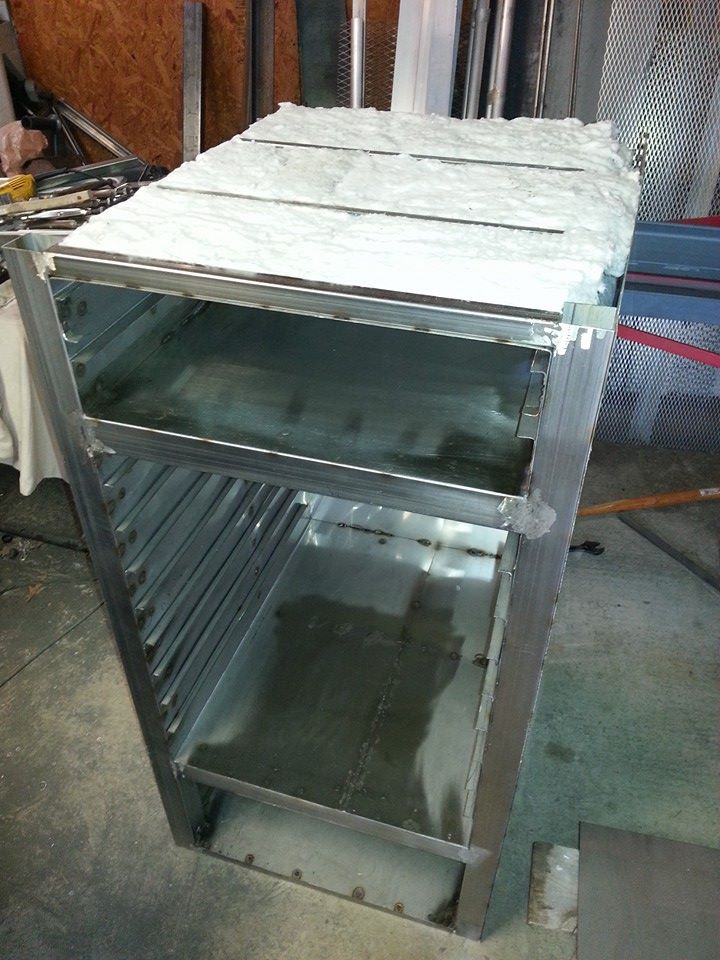 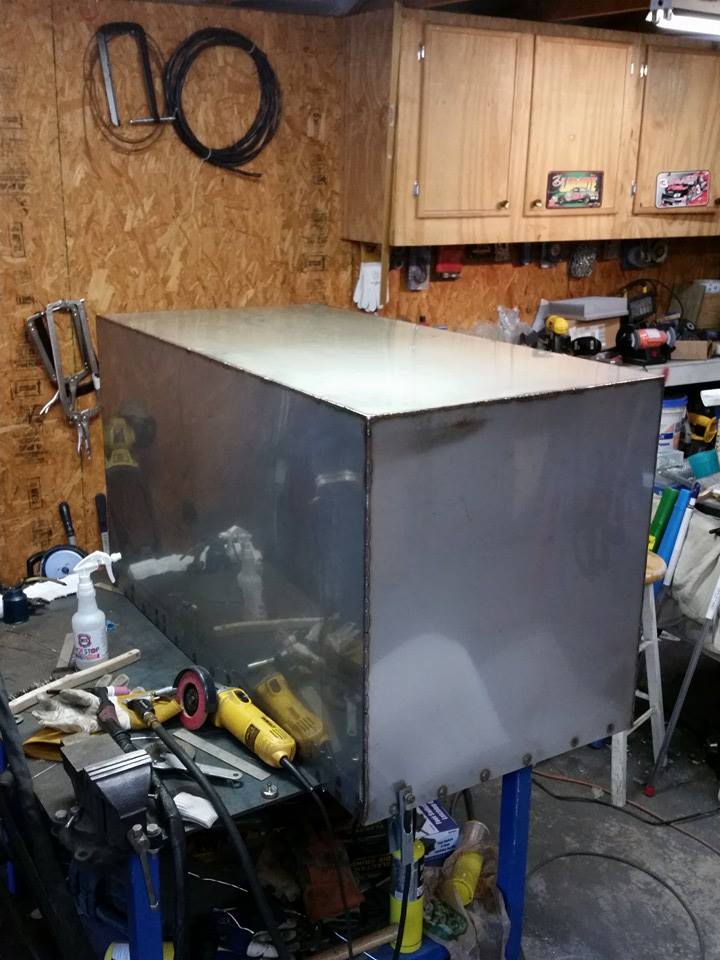 Close up of my newly learned tig welding results. 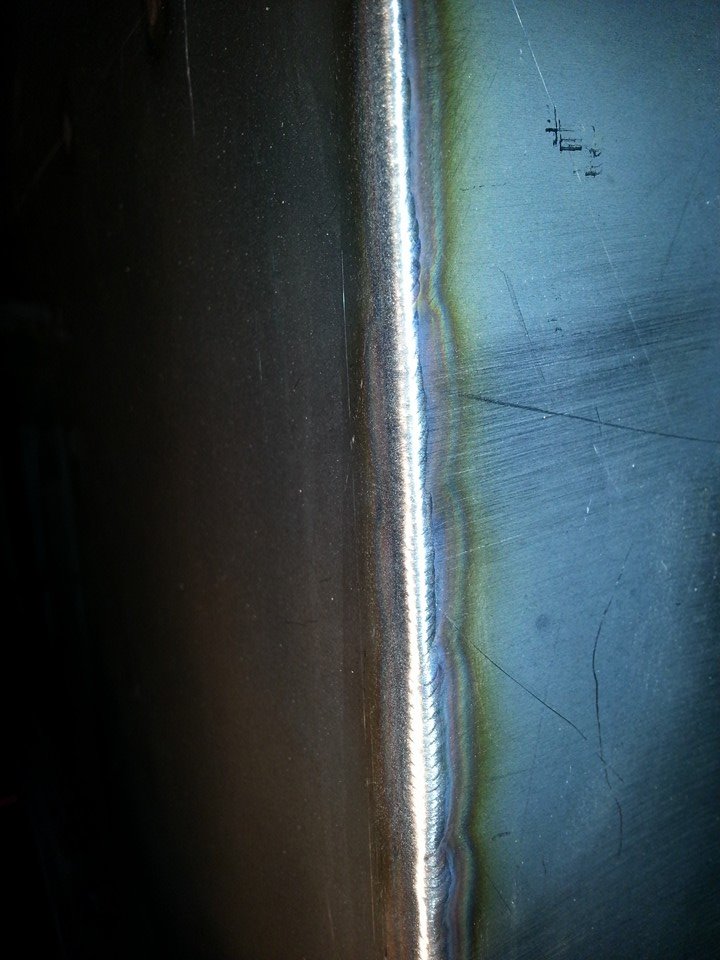 Outer skin done except for facing of the frame. Another lesson learned as this was an unnecessary step. 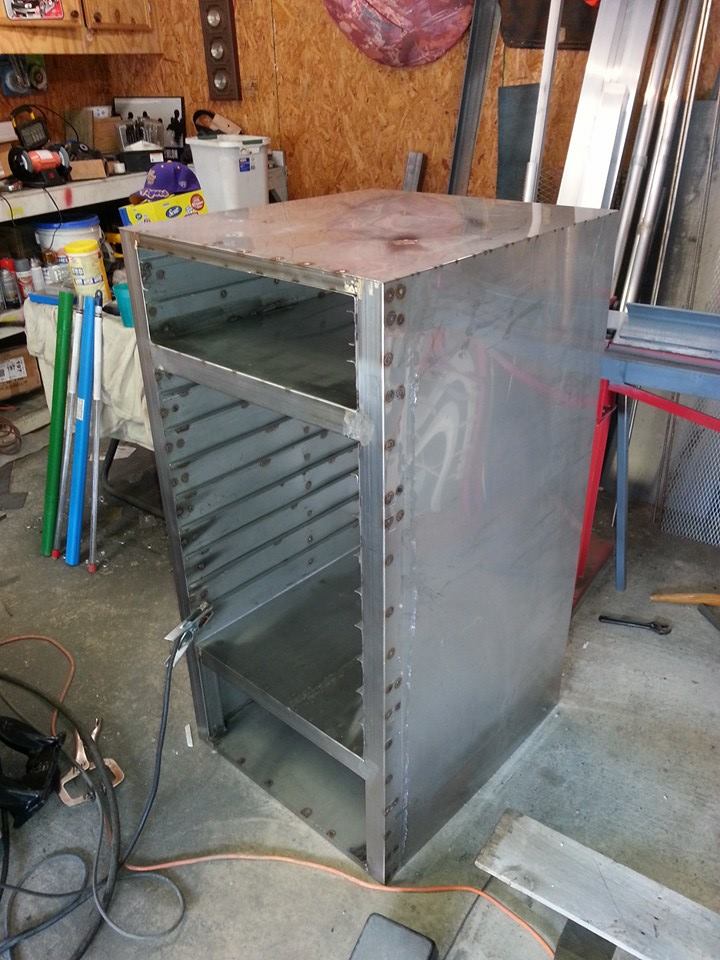 Step 7 – Wheels. One day, I’ll find some better looking rear wheels. But these will do for now. 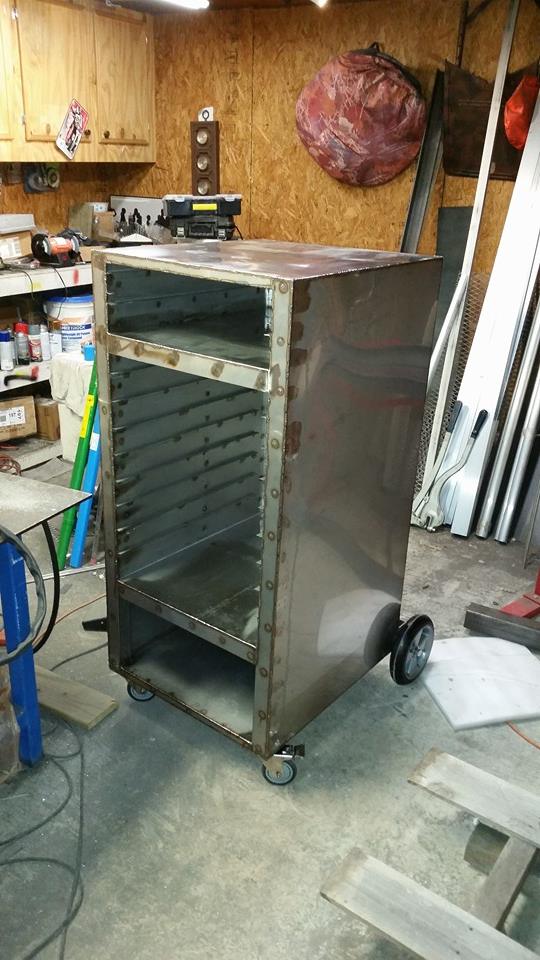 Step 8 – Exhaust hole. This hole is what stopped the build in January of 2017. After cutting and welding the holes, I started welding the circular strip that joined the inner wall to the outer wall at the back of the cook chamber. Some of this went fine, but parts did not – leading to my putting too much heat into these welds, warping the surrounding stainless sheet. 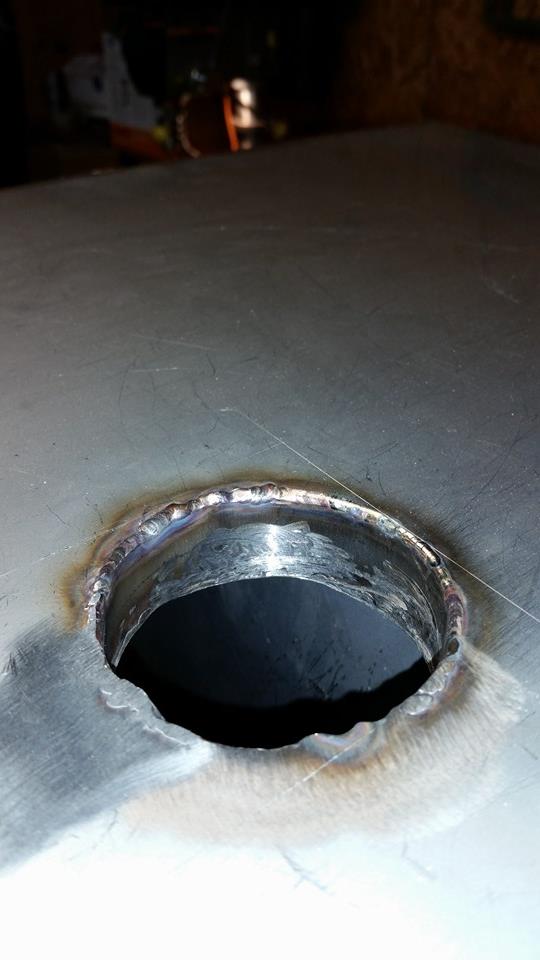 Step 9 – Smokestack. I had decided, with this build to make the smokestack from stainless sheet. This would allow me to use the outer wall of the smoker as one of the walls of the smokestack. However, because I had warped the back wall when I put in the exhaust hole, there were gaps as big as ½” that would have to be filled/eliminated in order the weld the smokestack on. I discovered this after cutting the three strips for the smokestack and putting the side pieces on the smoker.

I decided to take a break to give myself the time to figure out how to fix it and ended up starting a crawfish boiler build. By the time I had a decent idea for closing those gaps, summer was rolling around and I put the project on hold.

Step 9 redux – I decided to get back to it in December of 2017. And this was my strategy. I welded tabs onto the back so that I could use ratchet straps to pull up the sheet metal to eliminate the gaps. The gaps were still pretty big. So I put it off again, made another crawfish boiler.

This was a significant issue that kind of had me frustrated enough to want to avoid the project altogether. I was planning on getting back to it after Christmas in 2019, but other things got in the way. Finally, three weeks ago, I decided to do what I didn’t want to do and changed processes. I could fill the gaps with mig welding much better than with tig, so I bought a spool of stainless mig wire and a bottle of the right shielding gas and got back to it after converting AlxTgr's offset smoker to reverse flow.

As it turns out, by adding more, many more, tabs to the back of the smoker, I was able to eliminate most of the gaps. The mig welder had no problem filling in what gaps remained. The welds look ugly partly due to having to start and stop so many times to keep from warping the stainless sheet any further and partly because of my lack of skill. They will be ground out anyway.

Step 10 – Leveling. For whatever reason (like my inexperience maybe) the smoker was unlevel. I had to adjust the attachment points for one of the rear wheels so that it would rest on all four wheels. It now sits level back to front and side to side. This photo also shows the location of the exhaust hole.

Step 10 – Doors. I started with the top door and am currently working on the middle door.

I have also decided on a finish, even though this is skipping ahead a little. I figured I might as well go over the top so that it will stand out a little at cooking competitions when I get the team back together – so mirror finish it is.

The finish will take a while to complete, so I work on it a little bit at a time when I get tired of welding.

More updates to come. I’m hoping to have it ready to cook by Monday.
Back to top
Reply
Replies (5)
OptionsTop
Replies (5)
Share:

re: Smoker BuildPosted by puse01

re: Smoker BuildPosted by NOLALGD on 5/22/20 at 12:05 pm to BiggerBear
Great job so far, I really like the design. One day, years from now, would love to attempt something similar.
Back to top
Reply
Replies (0)
OptionsTop
Replies (0)

re: Smoker BuildPosted by BiggerBear on 5/28/20 at 9:20 am to BiggerBear
Well, I ran outta gas on Saturday (specifically Argon) so I couldn't finish the doors and get this baby up and smoking for Memorial Day. I picked up a new bottle on Tuesday and spent the last two evenings welding the middle door, about 18 feet of outside corner welds, at about 1 inch at a time, skipping around to prevent putting too much heat into the door and warping it any more than necessary. The heat marks in the following photo show the start/stop points. 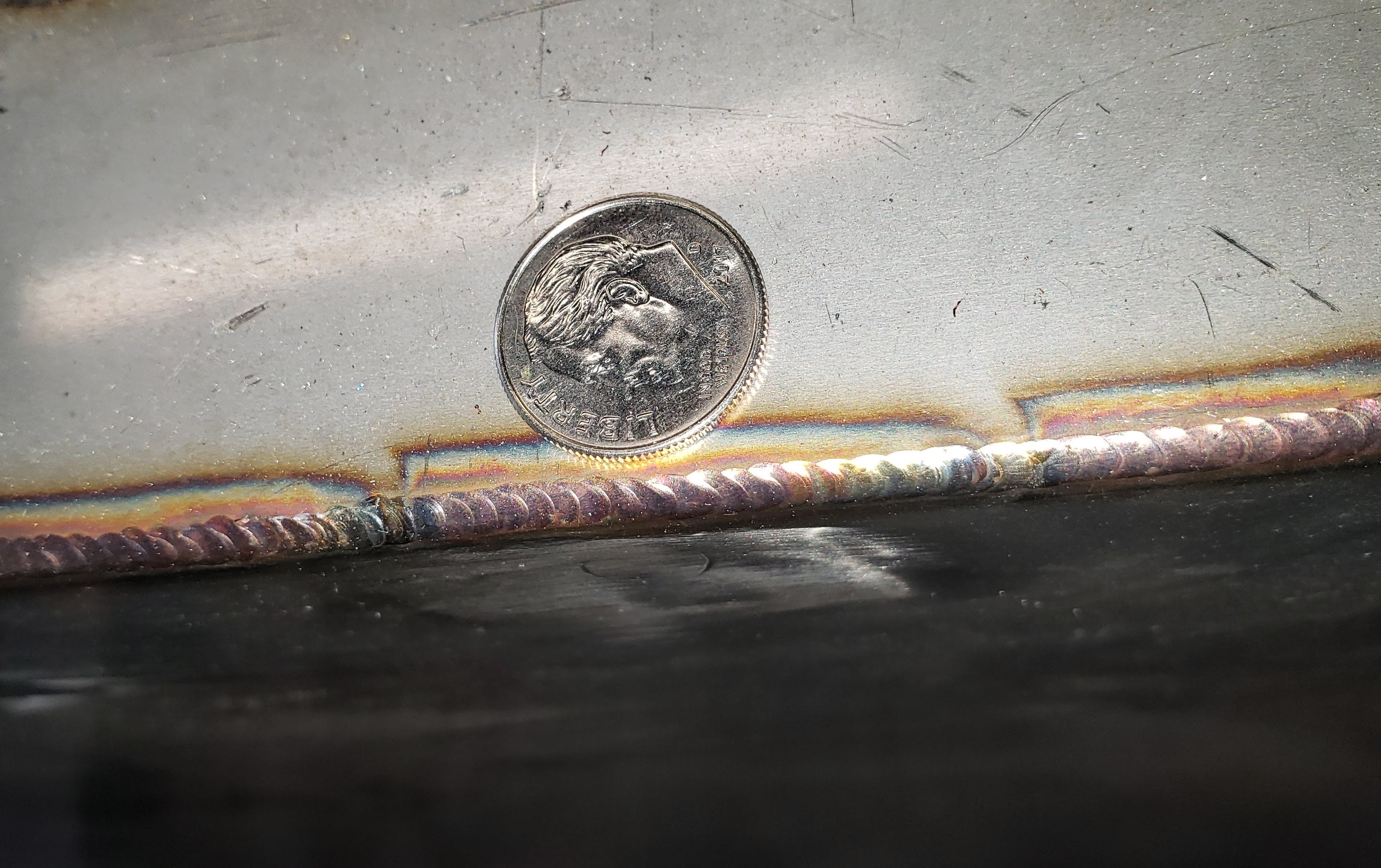 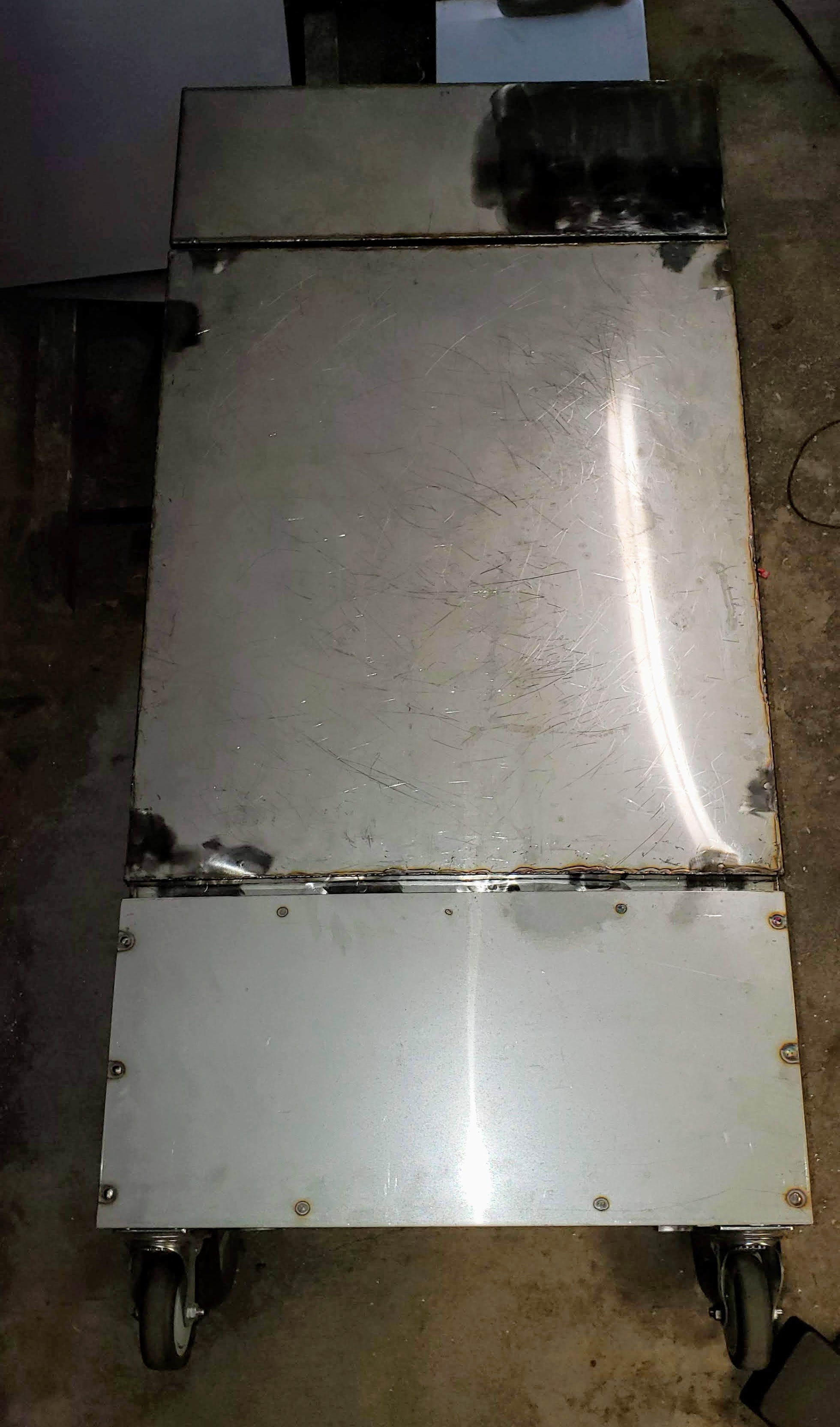 Now, to finish the fire door, put on the backing plates and gaskets, add handles and hang the the doors.
Back to top
Reply
Replies (0)
OptionsTop
Replies (0)