I just hope they can come out the other side of this and go back to the Ubiquiti of a couple years ago, selling solid hardware at good prices, and stop trying to force "features" that no one needs or asked for. They seem to be falling into the same trap that has nabbed many companies before, making decisions that please shareholders for the next quarter without thinking about the next year. They basically carved out an entire market segment all to themselves, and now they're kind of squandering it.

I know their legal department is running the show right now, but I hope they release a statement soon that restores a little bit of confidence and lays out some direction for the company.
Back to top
Reply
Replies (0)
OptionsTop
Replies (0)

on 4/8/21 at 4:46 pm to Korkstand
So they just explained that mystery Protect product in this video, and as expected it's a fisheye camera. Kind of crazy they put it on Youtube and it's not even in the EA store yet.

They also mention the Flex skins which haven't been available for forever and have actually been completely removed from their site. Just strange.
This post was edited on 4/8 at 4:51 pm
Back to top
Reply
Replies (1)
OptionsTop
Replies (1)

on 4/20/21 at 12:50 pm to Korkstand
The storms last week killed my keypad and ring doorbell cam at the office so I went ahead and installed the access system.
Mag lock with a motion activated request to exit, and an access reader pro at the front door.
Everything was easy to install and super easy to program, like everything else.
The reader gives the option of pin code or NFC card.
I hope the doorbell function and the phone interface is released soon.
Back to top
Reply
Replies (1)
OptionsTop
Replies (1)

quote:
I hope the doorbell function and the phone interface is released soon.

I want this on the g4 doorbell!
I should get my replacement doorbell Thursday. The little chime device was broken, so they RMA’d the full doorbell. I tried to ask them just for the chime, but they aren’t able to break the set.
Back to top
Reply
Replies (2)
OptionsTop
Replies (2)


I’m holding off on home cameras because I’m thinking I could mount that right on my soffit.
Back to top
Reply
Replies (1)
OptionsTop
Replies (1)

on 4/20/21 at 7:42 pm to Hopeful Doc
No word on pricing yet obviously but I would guess it will land in the $600-1k range. Under soffit would waste half its view, and it probably won't be outdoor rated anyway.
Back to top
Reply
Replies (1)
OptionsTop
Replies (1)

quote:
Under soffit would waste half its view


Not if it were placed on a corner!

I actually never watched the video until today since you sort of highlighted what it was and had been waiting for an EA post/product announcement. But the video says “weatherproof” at 4:57 and “can be used indoors or outdoors” a few seconds later.

It didn’t look at all like a “rugged” camera which was the other reason I hadn’t watched, but those words perked my ears up. I want to see some beta/review videos on actual FOV and PTZ stats, but it’s interesting enough that I am going to hold off on buying bullets until I see this come out. That, or I just want to continue to be lazy and not get in my attic again.
Back to top
Reply
Replies (1)
OptionsTop
Replies (1)

quote:
Not if it were placed on a corner!

quote:
But the video says “weatherproof” at 4:57 and “can be used indoors or outdoors” a few seconds later.

Huh, I missed that part. Nice!

quote:
I want to see some beta/review videos on actual FOV and PTZ stats

I'm hoping that they get the software right and that it works like some other fisheye cams that I've looked into. That is, it should always record full-res 360 degree video in the typical highly distorted fisheye format, and also that you can configure multiple "virtual" lens-corrected PTZ cameras with or without smart object tracking for live viewing. Further, when reviewing footage you should be able to PTZ all around at-will with lens correction.

quote:
That, or I just want to continue to be lazy and not get in my attic again.

quote:
I want this on the g4 doorbell!


I was actually talking about my unifi desk phones, but I'd like it integrated in the mobile app as well.
Back to top
Reply
Replies (1)
OptionsTop
Replies (1)

on 4/21/21 at 11:50 am to shawnlsu
"Hook Up" Rob has a new video out today comparing Protect with Reolink and BlueIris for person/vehicle detection. I know he's pretty knowledgeable about a lot of stuff, and I generally like his videos, but holy shite this video is just wacky.

A bit of the craziness:

He specs out the systems at 4EA 4K cameras with AI detection, so Reolink has just such a package with NVR for $475. Then he specs out a modest BlueIris PC build for less than $500 and throws in well you can use any cheap camera and uses 4EA Annke cams at $75 each and a $59 PoE switch for his cost calcs, which comes to like $840. Then for UniFi he uses a UDM-Pro, 4EA G4 Pros, and the $200 UniFi PoE switch, which comes out to more than $2400! He does mention that for that price you get a router, firewall, and switch, but he just glosses over it as a side note and rails on about how much more expensive it is. Why did he choose the $200 UI switch instead of the same $59 he used for BI? Why did he use the UDM-Pro instead of saving $180 with the CK+? Why did he chase megapixels and force 4K rather than save another cool $1k by getting G4 Bullets instead of the Pros? Cheap 4K like the Reolinks are useless at night, as he finds out later in the video, yet he continues to rail on the cost of Ubiquiti.

So then he goes into AI performance, but when he shows his cameras installed it turns out he used a Uniview PTZ camera for BlueIris instead of the Annke's that he specced for the cost! Of course BI performed well in the AI test, but no mention that any object detection software will work better when you feed it better quality video. That Uniview PTZ he used for BI has excellent IR and is an all-around solid camera, which surely improved BI's nighttime detection in his 24 hour test. He also didn't mention what sensitivity settings he used, so my guess is he left Protect at default which would intentionally not detect people walking on the other side of the street where he has them pointed.

On to the camera quality section, he does a side by side of the Reolink and G4 Pro, and predictably he harps on the Reolink daytime quality, and while he shows and talks about the bad night quality he just sort of ignores it. The difference is stunning, the Reolink is basically useless at night while the G4 Pro is almost cinema quality in comparison. You can clearly make out the kid riding a scooter in the street in the background, while on the Reolink you can vaguely tell that something is moving back there. Then he says there's no reason to talk about the BI camera quality because you can use any camera. Fine, but then he cuts to his score card where he gives BI by far the top score in camera quality, but the price at the top clearly does not achieve that score. And the kicker is he gave UI the worst camera quality score even though it's far and away better than the Reolink when it matters most.

I know that there are better values out there than UniFi cameras, but he went well out of his way to exaggerate the difference. He just casually tossed a business grade router and firewall, a managed PoE switch (vs unmanaged for BI and camera-only switch for Reolink), 8 extra switch ports (on the UDMP), and cameras with optical zoom (vs no zoom on the others), and then just harped on how expensive it is. He's got to be doing it intentionally, right?
Back to top
Reply
Replies (1)
OptionsTop
Replies (1)

on 5/3/21 at 10:15 am to Korkstand
yea this video is up to his normal unbiased standard. It really seems he was determined to push people away from UI for some reason.

He's still defending his bias. First it's "not fair" to exclude the cost of the routing gear, then it's "might as well" throw in the cost of the switch too because frick it I guess.

Again the dude is pretty knowledgeable all around, but I think Reolink is throwing some cash his way. Those cameras were straight useless at night, but he gave them a better score than the UI ones. And then to give BI top scores for camera quality while pricing in bottom of the barrel cameras is just laughable. He sure as frick didn't say that wasn't fair or "might as well" throw a few hundred extra dollars on that build.
Back to top
Reply
Replies (1)
OptionsTop
Replies (1) 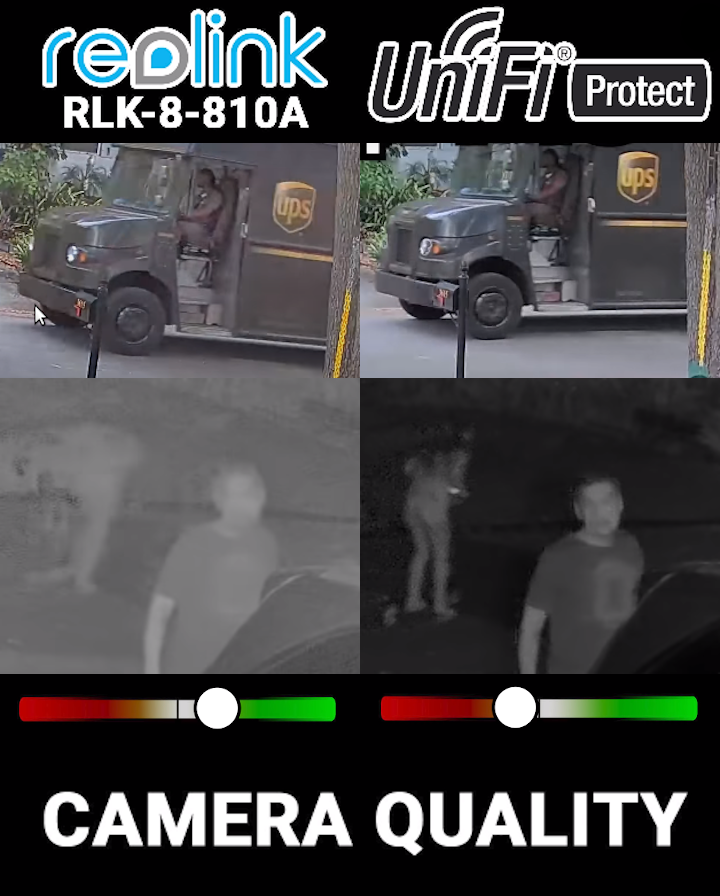 Some dude pointed out in the comments that the ghosting at night makes the Reolinks unusable, and ol' Rob is like "yeah I'd like to see them fix that". Sorry Rob, the cameras are so cheap because they use undersized and low quality sensors. What you see is as "fixed" as it's going to get, no firmware update is going to replace the hardware.