quote:
Agree 100%. We have zero creativity and not one ball carrier. This is not the Arsenal way.

I don't understand why we have to shoehorn players into this weird, albeit tactically innovative 3-4-3. We can play a 4 man back line easily right now. This utterly odd obsession both Emery and Arteta have with not attacking in the middle of the field is straight up idiotic too.

I would prefer Wenger back, in all honesty. We aren't going to be a top side as long as the Kroenke's are in charge, so why can't we have slick attacking play to at least make it enjoyable. Wenger, at his best, taught defensive positioning in open play far better than Emery ever did. In some of our better seasons, such as 2009-10, we only allowed 20 open play goals. The problem with Wenger was when he fixed one aspect, such as our problems with set piece defending, other problems opened.

I also understand the static positioning that Arteta seems to favor, but when you are playing a front three that includes a winger that is supposed to be an auxiliary no. 10 in Willian, and two center forwards, with one shunted out wide, you should have a more fluid pressing game. When, for example, Auba presses the opposition RCB, whoever is free should press the RB that would occupy the space that Auba just left, with the right-sided player pressing the LCB, and the wing-back pressing the wing-back. You have a 5-man backline, which should cover to the ballside of the field. In the attacking phase, players should occupy the positions where they are and make runs toward their specified positions, which gives new angles and options on the ball. We seem obsessed with offensive and defensive shape, but the most important aspect is actually shape relative to the situation.

I'll write a post on this later, as I have a bunch of shite to do. I'll maybe even make diagrams.
Back to top
Reply
Replies (1)
OptionsTop
Replies (1)

quote:
Arsenal have agreed to sign 18-year left-sided centre-back Omar Rekik from Hertha Berlin in January after he was expected to officially sign on transfer deadline day but a deal could not be completed in time.

Rekik has been assured by Arsenal academy manager Per Mertesacker that he will get to train regularly with the first-team when he joins, while Arsenal are keen on the idea of loaning Rekik back to Hertha Berlin to aid his transition.

quote:
The Arsenal ownership are prepared to make further investment in the team, with Dominik Szoboszlai already under discussion with hierarchy & technical staff. [@TheAthleticUK]

Still think Stan needs to go, but glad they keep investing. I'm all aboard the Szoboszlai train.
Back to top
Reply
Replies (1)
OptionsTop
Replies (1) 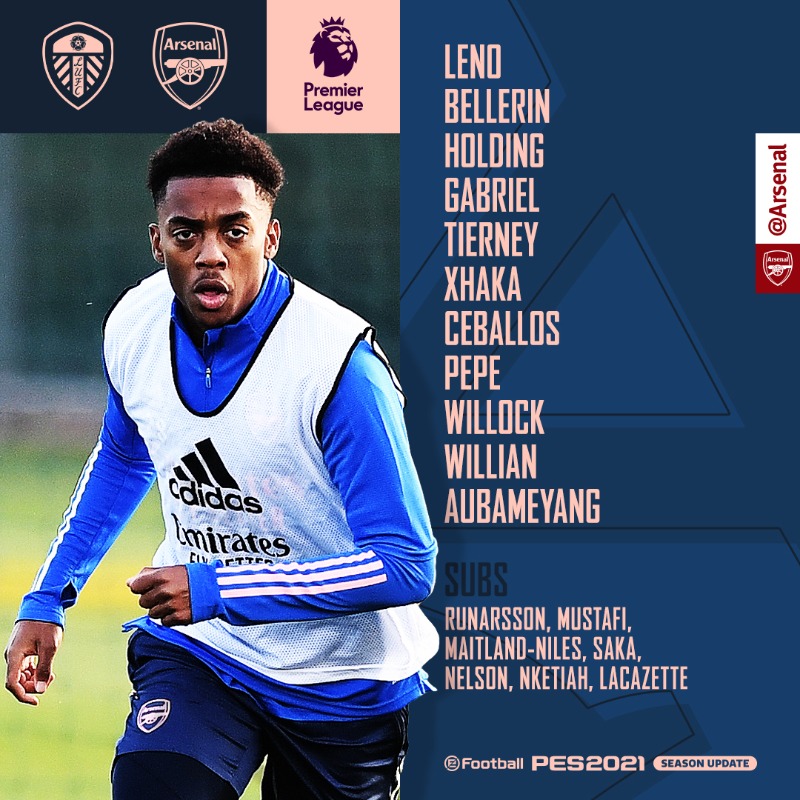 At least Nelson is in the bench, at this rate I think he gives us more than willian.
This post was edited on 11/22 at 9:41 am
Back to top
Reply
Replies (2)
OptionsTop
Replies (2)

Arteta and his tactics just ain’t doing it for me..it’s incredible the difference between seeing how many leeds players in the box compared to arsenal on the attack

don’t know if it’s lack of conditioning but our guys are very lazy going forward
This post was edited on 11/22 at 11:33 am
Back to top
Reply
Replies (1)
OptionsTop
Replies (1)

on 11/22/20 at 4:05 pm to crazy4lsu
We suck to watch. I'm starting to sour on Arteta. He has a lot to learn and maybe we don't have good players, but neither do some of these other teams that don't play scared.
Back to top
Reply
Replies (1)
OptionsTop
Replies (1)

on 11/22/20 at 4:20 pm to dgnx6
We’ve been super boring since Wenger left. The emphasis on positioning has me yearning for the wild days when we didn’t give a frick about positioning and just attacked regardless.

Something has been wrong with the club for a while though. It has to be the Kroenke’s. Wenger might have to save us from relegation, as the players we have look bored beyond belief and don’t seem to be playing with any fire at all.
Back to top
Reply
Replies (1)
OptionsTop
Replies (1)

Folarin Balogun looked set to leave Arsenal after no agreement could be reached to extend a contract that expires next summer. But #AFC have now reopened talks & although there’s no guarantee it’ll happen, Mikel Arteta wants the 19yo to stay @TheAthleticUK

on 11/26/20 at 1:46 pm to different arse
Pepe, Nelson, and Balogun all on the scoresheet today in a win over Molde. Officially advance to the next round in Europa.
Back to top
Reply
Replies (1)
OptionsTop
Replies (1)