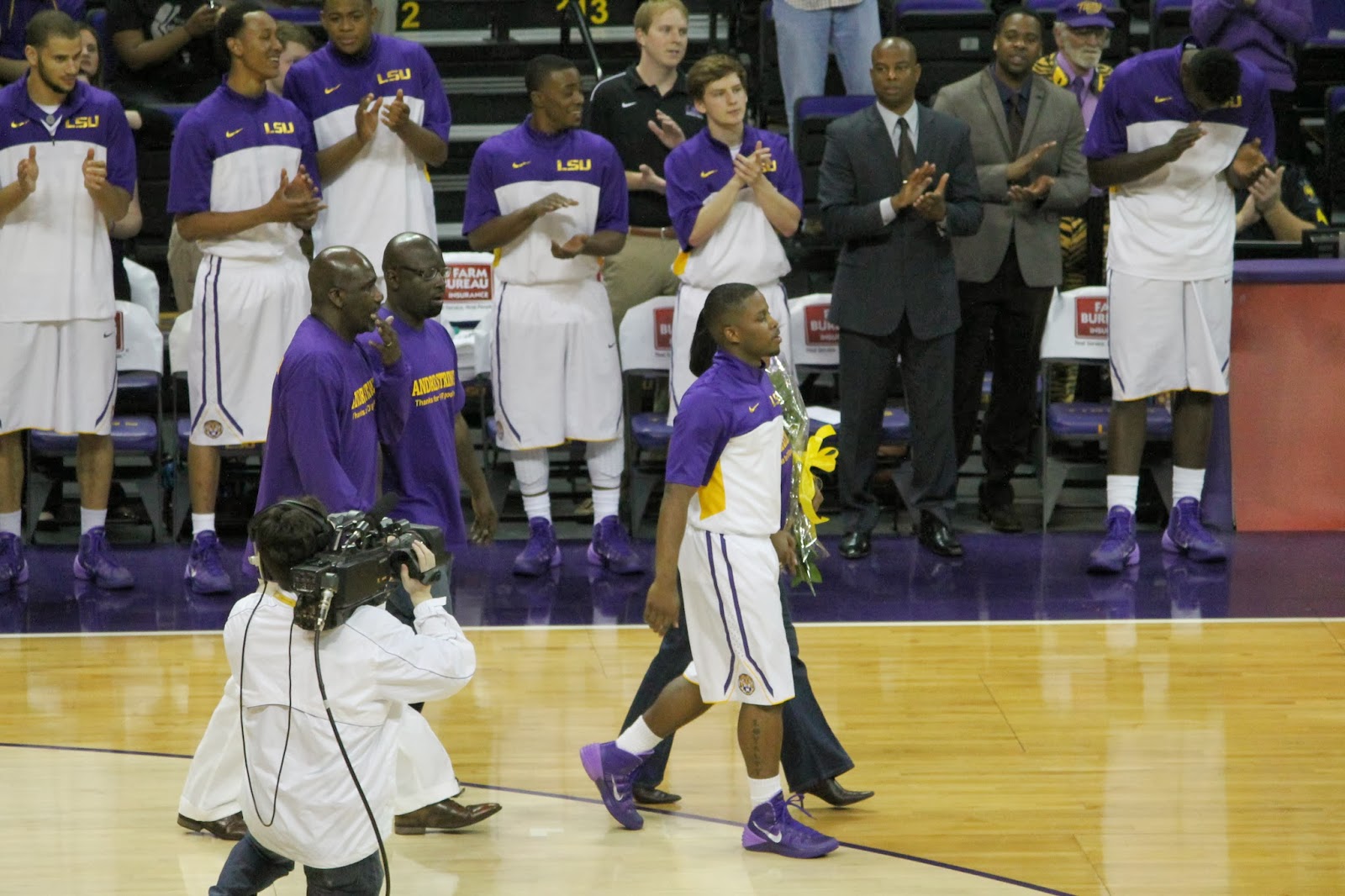 The Tigers ended their regular season Saturday afternoon with a 69-61 loss to the Georgia Bulldogs. The loss put LSU into the 7 seed spot for the SEC Tournament. The Bulldogs locked up the 3rd seed in the SEC with their win.

Georgia shot 60% from three point range while LSU only made 21.7% of their three point shots. Georgia made 8 of their first 9 three point shots before ending the game 9 of 15. Still, Georgia had a dagger three pointer to stop an LSU rally every time the Tigers tried to make a run at the Georgia lead.

Senior Andre Stringer led the Tigers with 22 points. The Bulldogs defense really held LSU's inside game to a minimum. Johnny O'Bryant ended the game shooting 2 of 8 from the field with only 5 points. Jordan Mickey wasn't much better with 9 points. He struggled from the free throw line making only 3 of 7 from the charity stripe.

Jarell Martin was the only other Tiger in double figure scoring with 13 points before fouling out in the final minute of play.

It was an interesting week for the Tigers. They finally won a road game on Thursday at Vanderbilt after losing 7 straight road games. Then the Tigers lose at home for the first time in 7 games. The Tigers end their regular season going 18-11 and 9-9 in SEC play. That record mirrors LSU's last season performance, however, LSU is likely heading to the NIT with a much better resume than last year.

The Tigers ended last season's regular season with a KenPom ranking of 95 while this season they finish 67th. They will play Alabama in the second round of the SEC tournament with a chance at their 19th win of the season.

LSU is currently projected as a three seed in the NIT Tournament and will possibly be able to host another game in the PMAC this season. Other SEC teams projected in the field include Ole Miss (8seed), Georgia (6seed), and Missouri (2seed).

LSU has a chance to improve their NIT seeding in the SEC Tournament, but they have likely lost any chance at an at large bid to the NCAA Tournament. I'll have a big SEC Tournament preview in the upcoming days to look at what the path to an SEC Championship will take for the Tigers.
Filed Under: LSU Basketball
Related:
Shareef O'Neal Tweets About His Foot Injury Recovery
Watch: Highlights From LSU's 66-51 Victory Over Ohio
Video: General Wade Was Heated After LSU's Win Over Ohio On Wednesday Night
LSU Remains Undefeated After 66-51 Victory Over Ohio

While she is still a student at Notre Dame.

Bowlsby is lashing out, poor guy.

Official: LSU Is Headed To The Texas Bowl vs. Kansas State

Brady has been the OC at Carolina for the past 2 years.

7
Former LSU Passing Game Coordinator Joe Brady Has Been Fired By The Carolina Panthers
Brady has been the OC at Carolina for the past 2 years.

30
The College Football Playoff Is Set, Here's The Matchups
Did the CFP committee get the seeding right?

21
Kirk Herbstreit Says LSU Will "Become Juggernaut Once Again" Under Brian Kelly
Herbstreit, Desmond, and Pollack all had positive coments.

10
Video: Grace Kelly Puts Out Funny TikTok Video About Her Dad Taking The LSU Job
While she is still a student at Notre Dame.

41
Report: Tommy Moffitt Is Not Being Retained On Brian Kelly’s New Staff
Moffitt has been as LSU since 2000.