1
Re-posted by my Cousins Husband who has been on the force in The Salt Lake City Area for almost Twenty Years.

Are you interested in becoming part of the occupation with the highest suicide rate of any profession? If you choose not to kill yourself, you’ll be happy to know that a 2013 study published by the National Institutes of Health found the average life expectancy of a police officer to be 57. Does a divorce rate of almost certainty sound great to you?

Well then, once you go through an invasive and detailed background check, physiological examination, physical examination, fitness test, written test and a 6 month long (often live in) boot camp style academy, you’ll be released to the streets where uncertainty and possible death wait around every corner!

Before your first tour of duty, you can look forward to being issued used and often expired body armor that may or may not fit well but will still “probably” stop a bullet. A used firearm, sometimes 20 years old or older with no maintenance record will be what you depend upon for your life. Rest assured that more often than not your equipment will be whatever was cheapest! You will be trained to the state MINIMUM standards, gray areas will often be entered in training as your given a poorly photocopied and dated handout to read on your own time for your official training. Sometimes you will go your entire carrier without getting a refresher on some of the courses you had in the academy!

But that’s not all!

- Rotate to midnights every 2 weeks

- Weekends, holidays are a must, every year

- Mandatory overtime, often with no notice!

- Court on your days off

- Natural disaster, blizzard, pandemic – forget your family, home and personal safety and get to work slacker.

- Morning and or afternoon court on your midnight rotation (Sleep??….Suck it up butter cup!)

- An entry-level police officer starts off making $31,965 per year on average in the US according to reported salaries by Indeed users! Finally get that used car from 2003 you’ve been eyeing up!

- You’ll have a split second to make a choice, but don’t fear! The Monday morning quarterbacks and Facebook lawyers will have your back and be sure to correct you with how they would have handled the situation better.

- Eating at a restaurant? – make sure to request they hold the spit, shards of glass and rat poison

- Dated equipment – by the rust old locker full! Some of which is known to cause crippling injury - (But it looks squared away and it’s the way we’ve always done it)

- Risk everything for people who hate you – even if your killed – the lawyers will come after your estate and leave your wife and kids in the gutter. If the Lawyers fail, you’ll be a hero and your wife and kids will get a flag of medium quality from your local Lowes etc. to fill your void.

But wait, act now and you’ll also get:

- Be sent into Covid 19 areas with no training and no equipment! We’ve lost 121 officers this year alone, the next one could be you!

- Dead Bodies, yeah you get to touch and smell them, be careful of the “poppers and leakers”

- Rape victims, children beaten and molested – you get to see all their attackers get a slap on the wrist after spending weeks investigating the crimes!

- Criminals you arrest, it’s a race you’ll always loose - no matter how fast you are at the paperwork they’ll be out faster.

- Arrest someone’s kids for doing wrong? Don’t you have anything better to do? Be prepared to get berated on how petty, racist and worthless you are.

Now you’re asking, how can this get any better? For a limited time, we’re also throwing in:

- The family and friends that choose to still speak with you will be sure to bring up how bad “this one cop was” at fun events like Christmas, kids birthday parties and family reunions.

- Criminals and scumbags alike will use you to use the system. You’ll get put in harms way time and time again for their petty games and reckless antics.

Use promo code (Oink) now and we’ll also include these bonuses:

- Threatening your family (especially children) with murder and rape!

- PTSD from decades of horrors like burned children, rotting corpses, getting shot at, violent attacks from the very people who called you for help, blood and guts from car accidents, people who use you as their means of completing suicide and more!

- Racist - your background check made sure you weren’t, but as soon as you dawn the uniform you now are “Blue Hitler.”

- Just remember that when the time for you to get greedy and ask for standard benefits or a pay increase, you’ll get the same answer we’ve been giving you for decades “ We really appreciate the hard work you do, but its just not in the budget this year.”

If you’re selfless enough to do this thankless job – You’ll forever be in the debt and gratitude of millions of great Americans who love and support you. The silent majority whose trust you have earned and respect you have won. 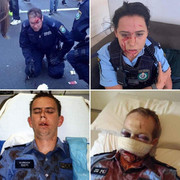 re: So Ya Wanna be A Cop?Posted by Stealth Matrix

Yep, It's long but there is a lot to cover...
Back to top
Reply
Replies (0)
OptionsTop
Replies (0)

on 5/4/21 at 11:36 am to Chazreinhold
Do they still have the reserve units. You don’t get paid but are on duty patrolling with all the authority of a paid cop.
Back to top
Reply
Replies (1)
OptionsTop
Replies (1)

quote:
Do they still have the reserve units. You don’t get paid but are on duty patrolling with all the authority of a paid cop.

Yes, some Counties have Reserve and Auxiliary Officers.
Back to top
Reply
Replies (0)
OptionsTop
Replies (0)

re: So Ya Wanna be A Cop?Posted by Mid Iowa Tiger

Cops are beginning to become like teachers. Everyone knows the job is underappreciated and underpaid. Why act surprised after you get into it?

Either you want to do it or learn to code...

on 5/4/21 at 12:01 pm to Mid Iowa Tiger
Being a peace officer is a profession not suitable for everyone.

Call me narrowminded but I don't "feel bad" for anyone that has that profession. If you want it, then you know what it comes with.

We use to do a good job as a society of keeping it out of the public eye.

quote:
Everyone knows the job is underappreciated and underpaid

Maybe on this board but I don't see a ton of that's sentiment. I find that most of the narrative around police to be insanely slanted to include all 770,000 of them. You don't hear "this policeman did this" it is always "the police". I think what people are seeing now to an extent are people sympathetic to police and some police state their case. And FWIW comparing cops to teachers is a bit disingenuous. I have 3 teachers in the family and none have been shot at doing their job, I cannot say the same about mine. For the most part cops know exactly what they are getting into and accept the terms but these are extraordinary times and some of them might get a bit frustrated.
Back to top
Reply
Replies (2)
OptionsTop
Replies (2)

to Everyone
Advertisement
Back to top
Rex Feral


re: So Ya Wanna be A Cop?Posted by Rex Feral

on 5/4/21 at 12:11 pm to BearCrocs
That all sucks, but they'll be the ones taking our guns and sending us to reeducation camps in a couple years. How many will refuse to do so and how many will say 'I'm just following orders'? I have a feeling more than we expect.
Back to top
Reply
Replies (4)
OptionsTop
Replies (4)

quote:
That all sucks, but they'll be the ones taking our guns and sending us to reeducation camps in a couple years. How many will refuse to do so and how many will say 'I'm just following orders'? I have a feeling more than we expect.

The downvotes show people still don't get it.

Cops are agents of the government and will do exactly as they are told.

btw-The pay thing in the OP is comical judging by Chauvin's financials.
Back to top
Reply
Replies (2)
OptionsTop
Replies (2)

re: So Ya Wanna be A Cop?Posted by WhiskeyThrottle on 5/4/21 at 12:49 pm to JackVincennes
I'm mostly curious why there are any Portland Police officers to begin with. If I had to deal with a lacking support in that environment, hell, I might throw my badge in the river and join the Antifa movement. Ted Wheeler is the biggest cuck mayor to ever "govern" a city.
Back to top
Reply
Replies (0)
OptionsTop
Replies (0)

quote:
That all sucks, but they'll be the ones taking our guns and sending us to reeducation camps in a couple years. How many will refuse to do so and how many will say 'I'm just following orders'? I have a feeling more than we expect.


If One lives in a Liberal Shithole then I guess there are cops out there that will try to enforce it. I suspect if they do, many will not make it out alive.

Here is the response from our County Sheriff after Stink Finger Joe unveiled his Gun Control Measures.

quote]"Unconstitutional gun control in any measure will not happen in Cache County on my watch," Sheriff Chad Jensen wrote Friday in a press release[/quote]
This post was edited on 5/4 at 1:03 pm
Back to top
Reply
Replies (0)
OptionsTop
Replies (0)

re: So Ya Wanna be A Cop?Posted by Rolltide10

on 5/4/21 at 1:15 pm to Stealth Matrix
My oldest son leaves for police academy Sunday. I pray hard for him every day and I am so proud of him for doing a job that I couldn't do.
Back to top
Reply
Replies (2)
OptionsTop
Replies (2)

re: So Ya Wanna be A Cop?Posted by SOCAL TIGER

Your probably the first to complain about a cop. You comment cements the fact that your a big piece of shite who has no value in society. I hope you get what’s coming to you.
Back to top
Reply
Replies (1)
OptionsTop
Replies (1)

re: So Ya Wanna be A Cop?Posted by SOCAL TIGER

re: So Ya Wanna be A Cop?Posted by FredBear

quote:
That all sucks, but they'll be the ones taking our guns and sending us to reeducation camps in a couple years.


Not where I live. Our sheriff has already said he had no intention of enforcing a gun ban regardless of what the federal government did. Folks who live in liberal shitholes may have something to worry about though
Back to top
Reply
Replies (0)
OptionsTop
Replies (0)

re: So Ya Wanna be A Cop?Posted by LSU Jax

quote:
- Dead Bodies, yeah you get to touch and smell them, be careful of the “poppers and leakers”

WTF does that mean?