5
My dad and I have been traveling up from Louisiana to Illinois for 8 years now, chasing Midwest whitetails during the rut. We have had some great success over the years and it's always an enjoyable trip. This year was no different.


Once we got up there, bought our licenses and groceries, we headed out to scout around some places that we have had luck in the past. There is a ridgetop that narrows above a creek bluff that creates somewhat of a pinch point that I decided to sit the first afternoon. I told my dad that I wanted to get in the bottom adjacent to that ridge but the wind was wrong. I set up where I had a good shot of the whole ridge but I could also see across the creek, into the bottom. An hour before dark I hear something that makes me turn and look into the bottom and sure enough I see a hell of a buck down there, of course. I text my dad saying, "Saw a dandy in that bottom. He has a phenomenal right side but something was off with the other side. No doubt shooter."


All week the temps were higher than usual with winds out of the south except for Tuesday evening. That afternoon I snuck down there into the thickness, hung my saddle and hunted. First deer I saw was about 2 hours before dark. A doe worked her way through and a nice young 8pt was only a minute behind here, checking and freshening every scrape he passed. After sunset, I heard the undeniable sound of deer fighting (obvious it wasn't some fool rattling lol). I eventually see these two 1.5 y.o. bucks walking side by side and stopping to spar every 20 yards or so. Pretty cool to see.


I bounced around the next few days, hoping to run into one but I knew that Friday’s cold front was going to be my chance to get back down in the bottom. An all day sit was going to happen.


I get in there early, very early. I didn't want to chance someone else beating me to the spot. Climb up and settle in. Right at first light one of the bucks that was sparring the other day shows up. He passes by me at 10 yards. Good start. Next I see a small 4pt, he beds down 30 yards from me. Shortly after, another one of the bucks I saw sparring the other night. He walks up to the bedded 4pt and pushes him out of there. Around 8:00 I see the 3rd buck I had seen Tuesday, the one following the doe.


I text dad “I’ve seen all the bucks that were down here except the big one.”


8:30 I hear a deer snort wheeze. (Legit first time I’ve heard a wild deer do that). I look to my 8 o’clock and he’s standing there bowing up to the first buck I saw. That buck says aw hell no and walks away. This buck ends up walking the same trail as the first buck I saw. I am expecting a 10 yard, perfectly broadside shot. LOL at that right? He passes that "turn off" and proceeds to walk up 5’ from my tree without giving me a shot.


He looks up. We lock eyes.

He bounds off. I start yelling “MEHP MEHP”


He stops in some thick brush. He’s behind a tree and I can just see his shoulder forward but I have a fairly clean path. I put my pin right on the edge of tree he was standing behind and sent it.


Mule kick. He took off the way he came from. Crossed the creek. Gone.


I immediately called my dad. “I STUCK HIM!”


I was pumped but there was still some uncertainty, in my mind, about the shot. I couldn’t see my arrow on the ground but I know the nock buried in him. My initial thought was that I heart shot him.


I got down after 20 min (couldn't stop shaking until then) and find my arrow and the back 8” were broken off. I see blood. Good blood.


Trailed him 40 yards to the creek he crossed, which was too deep for me to cross. I placed a pin on OnX when I was in the tree of the last place I saw him. I packed out and had to go all the way around. I get to the last place I saw him and he’s piled up in a gulch 5 yards off the creek bank. I would have easily been able to see him from the stand if not for that ditch he was in.


This ended up being the only shooter I saw all week. It was tough hunting but that made it that much more rewarding. 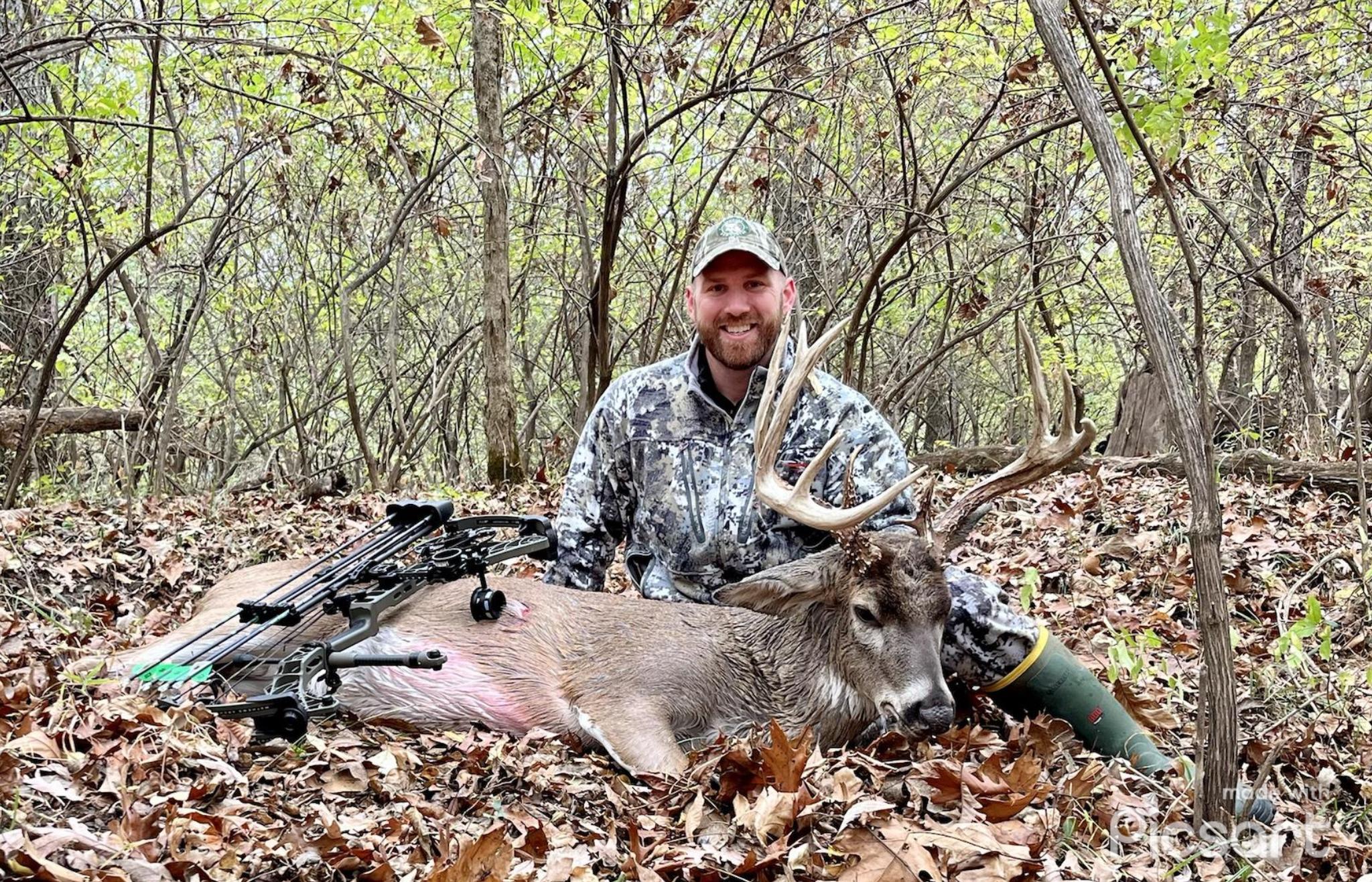 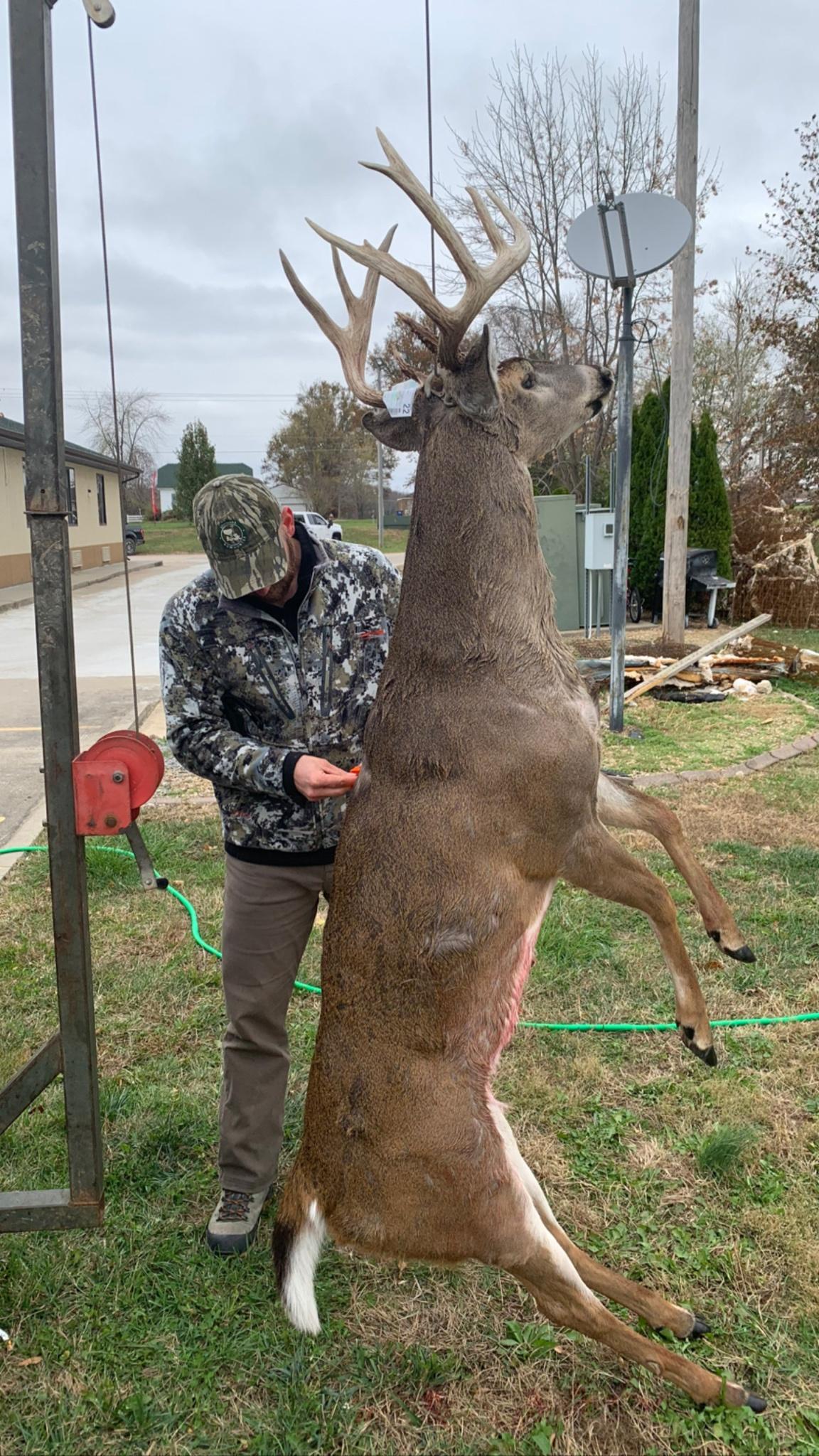 re: 2022 Illinois BuckPosted by MasterJSchroeder on 11/18/22 at 8:21 am to mylsuhat
Congratulations! You put in the work and it paid off. Hell of a buck. Enjoyed the read
Back to top
Reply
Replies (0)
OptionsTop
Replies (0)

re: 2022 Illinois BuckPosted by Columbia

Do you always clean your deer that way? You’re the only other person I’ve seen so that outside of my family.
Back to top
Reply
Replies (1)
OptionsTop
Replies (1)

re: 2022 Illinois BuckPosted by Bama and Beer

re: 2022 Illinois BuckPosted by Goldensammy on 11/18/22 at 8:31 am to mylsuhat
Awesome deer and write up. Thanks for sharing. Congrats.
Back to top
Reply
Replies (0)
OptionsTop
Replies (0)

quote:
Do you always clean your deer that way? You’re the only other person I’ve seen so that outside of my family.

We have in the past but in this case I borrowed the winch/frame from someone and we didn't have a gambrel. I wasn't caping him out so it didn't matter
Back to top
Reply
Replies (1)
OptionsTop
Replies (1)

quote:
I wasn't caping him out so it didn't matter

You have more restraint than me, or maybe you just shoot a lot bigger deer. That one would be going on my wall.
Back to top
Reply
Replies (2)
OptionsTop
Replies (2)

quote:
Did your dad get one?

quote:
You have more restraint than me, or maybe you just shoot a lot bigger deer. That one would be going on my wall.

He looks incredible as a skull mount 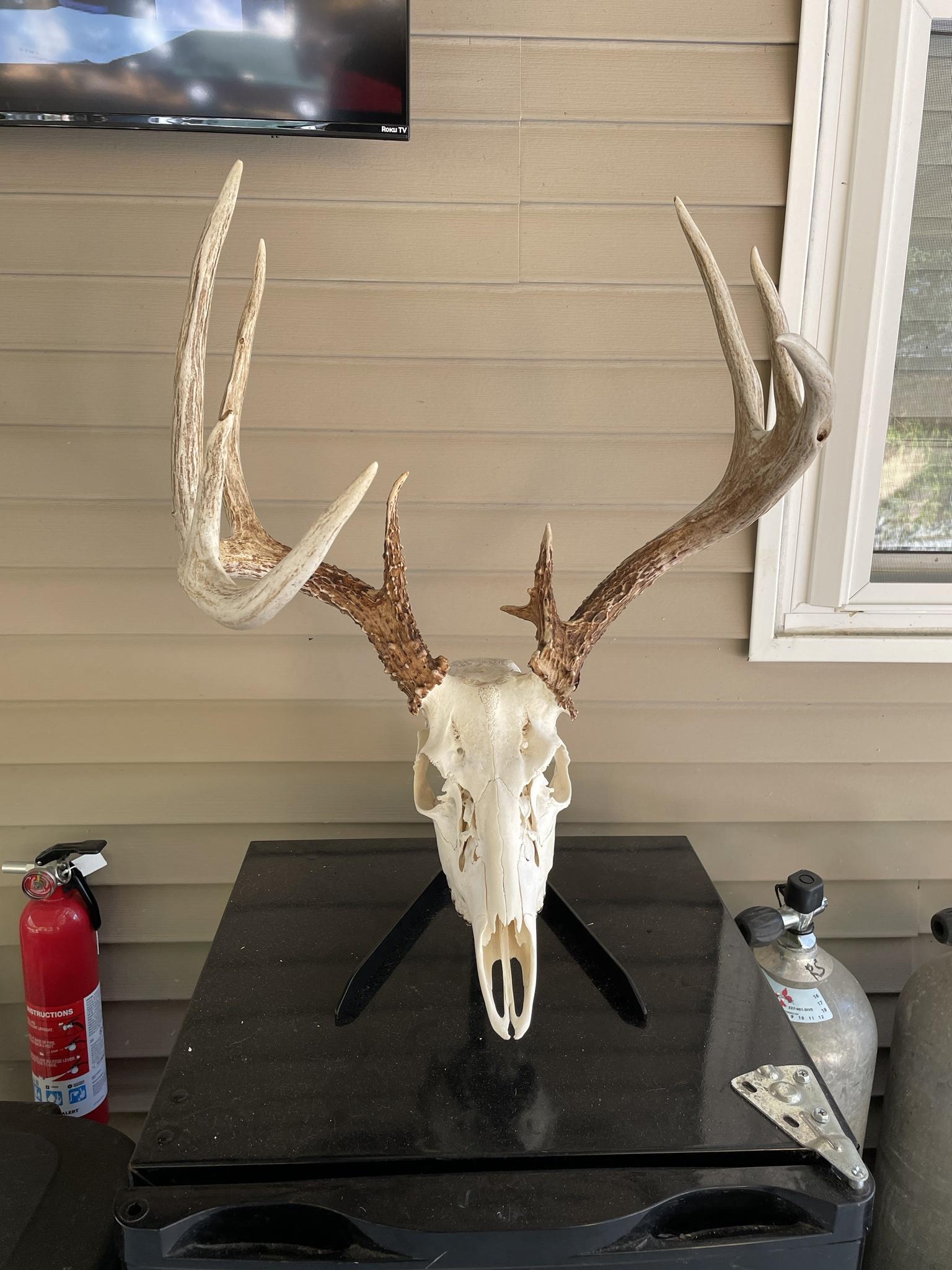 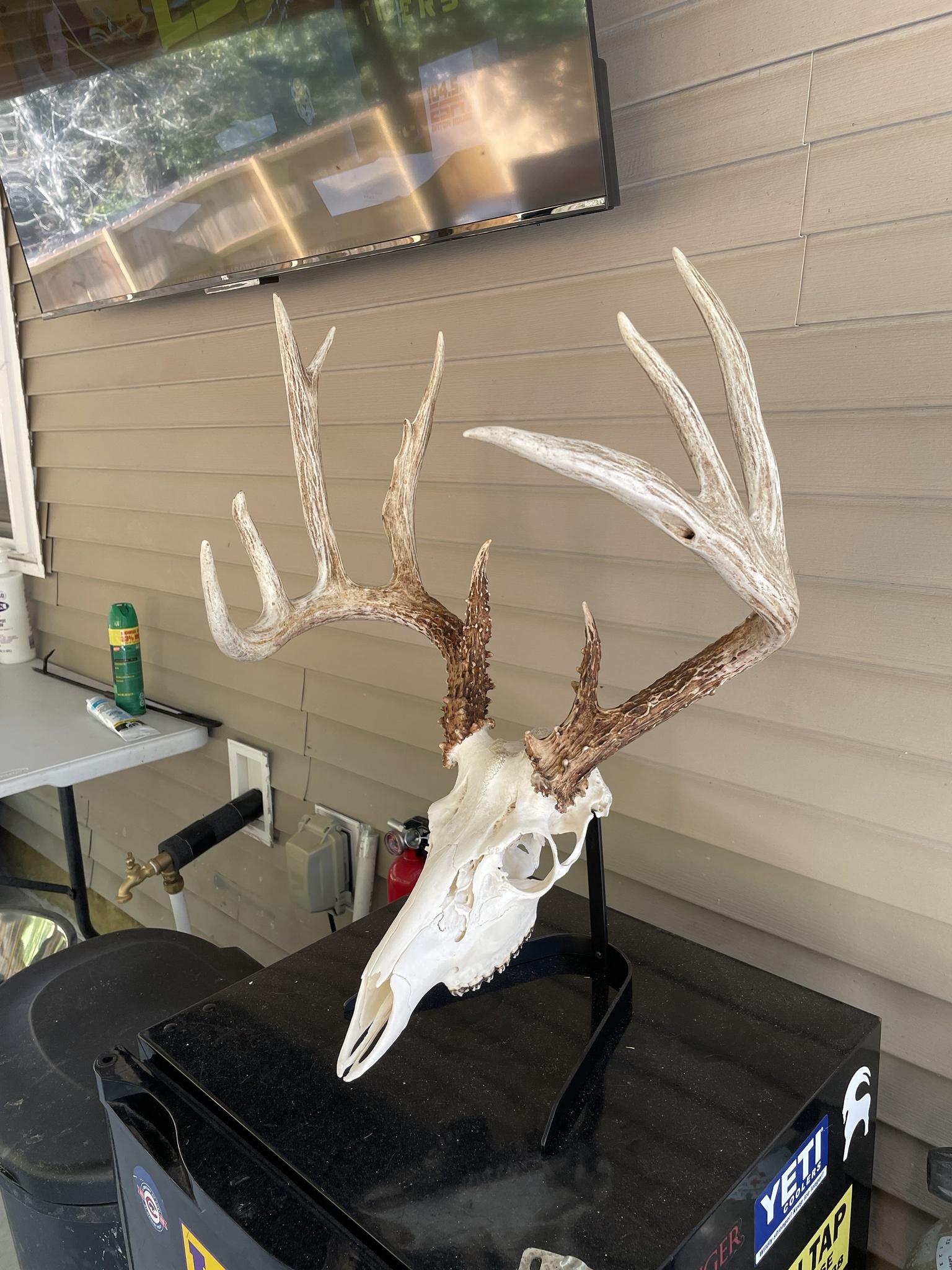 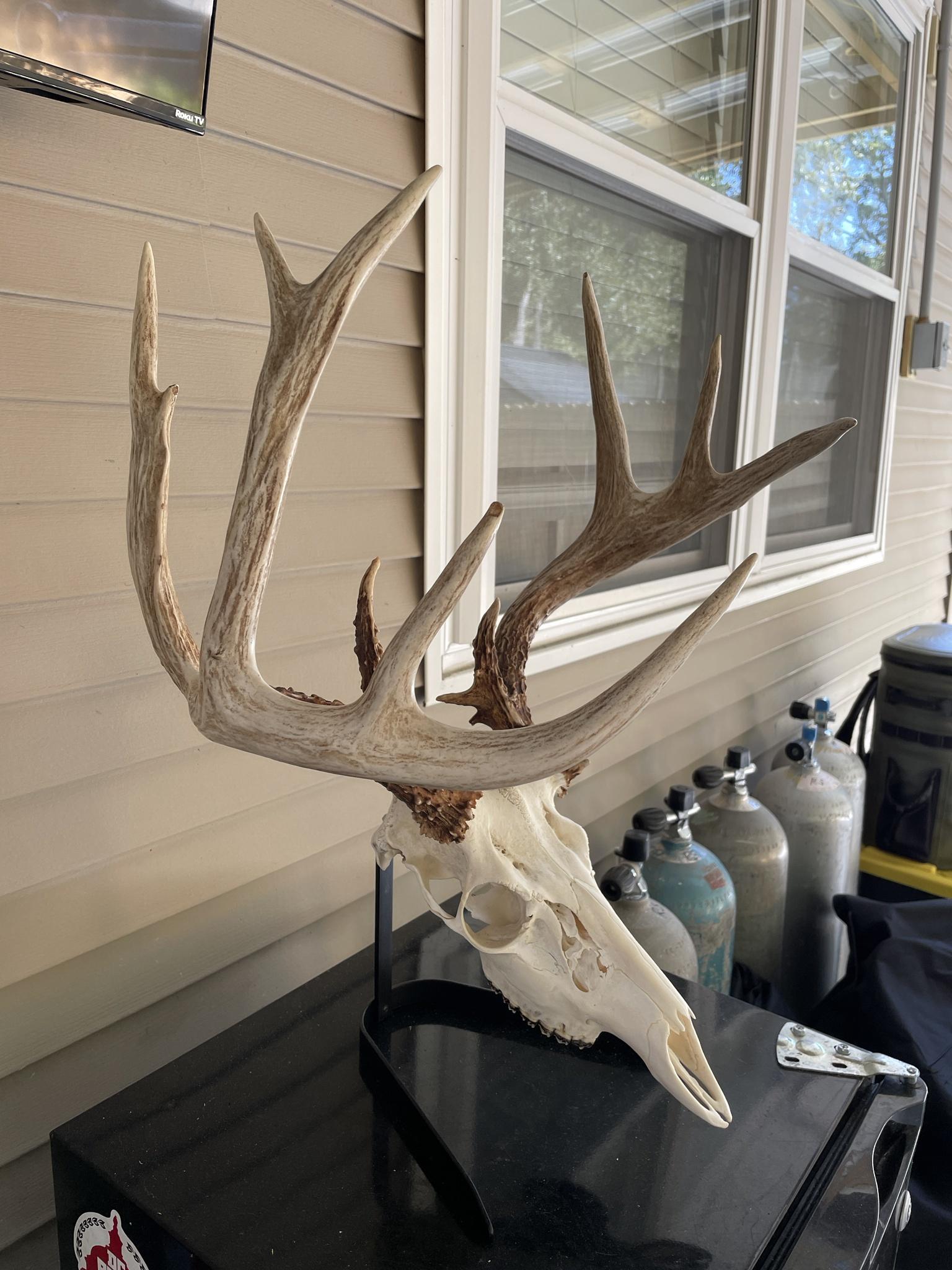 to Everyone
Advertisement
Back to top
Salmon

re: 2022 Illinois BuckPosted by Salmon

We were in northern MO the week before and the weather was terrible. Barely in movement.

All reports were that the weather and rut kicked off the week you were there.
Back to top
Reply
Replies (0)
OptionsTop
Replies (0)

quote:
You have more restraint than me, or maybe you just shoot a lot bigger deer. That one would be going on my wall.

He kills giant fricking bucks every year. He’d run out of walls if he shoulder mounted all of them.
Back to top
Reply
Replies (0)
OptionsTop
Replies (0)

re: 2022 Illinois BuckPosted by Loup

on 11/18/22 at 8:56 am to mylsuhat
good lord that's hell of a buck and an awesome story to go with it! Congratulations, any idea what he weighed?
Back to top
Reply
Replies (1)
OptionsTop
Replies (1)

re: 2022 Illinois BuckPosted by Got Blaze

in order to kill the monsters, you gotta put in hard work and time on the stand
Back to top
Reply
Replies (0)
OptionsTop
Replies (0)

quote:
any idea what he weighed?

I do not. I gutted him in the field but he was still significant lol

re: 2022 Illinois BuckPosted by Loup

quote:
The de-bonned neck meat felt like it was 40+ lbs

re: 2022 Illinois BuckPosted by Mr Breeze

on 11/18/22 at 9:31 am to mylsuhat
Great, terrific buck you are rightly proud of this guy. They grow so much bigger up North than our Texas and LA deer. An awesome kill and story.

I love the mount style you chose.