Page 4 of 4
Posted by
Message
TrumpTakeTheWheel

US Marine Corps Fan
MAGAVille, Down-voted by libs only
Member since Jun 2022
305 posts


re: USFL Championship: Stallions 33 vs. Stars 30, FINAL [FOX]Posted by TrumpTakeTheWheel

on 7/3/22 at 9:59 pm to TomRollTideRitter
Skip Holtz is telling McGough ... Never Doubt Yourself!
Back to top
Reply
Replies (2)
OptionsTop
Replies (2)

Posted by Master of Sinanju on 7/3/22 at 10:00 pm to TrumpTakeTheWheel
Entertaining game and entertaining season. I like the USFL.
Back to top
Reply
Replies (1)
OptionsTop
Replies (1)

on 7/3/22 at 10:01 pm to TrumpTakeTheWheel
The only city to win WFL and USFL championships. Titletown USA!
Back to top
Reply
Replies (1)
OptionsTop
Replies (1)

US Marine Corps Fan
MAGAVille, Down-voted by libs only
Member since Jun 2022
305 posts

on 7/3/22 at 10:02 pm to Master of Sinanju
I enjoyed the XFL a couple of years ago but this USFL season was a little better.

Honestly, I like both better than the NFL at this point.

Hats off to these guys playing hard in a league they all know might not make beyond the current season. I wish a lot of Americans could take some heart from them.

quote:
How many people shot in Bham tonight? Gonna be lit.

I wonder who’s at the bar in Birmingham tonight, in their gear, cheering just a little too intensely

on 7/3/22 at 10:11 pm to MykTide
The Stallions finally get payback for the Stars knocking them out of the playoffs twice in the 80's.
Back to top
Reply
Replies (1)
OptionsTop
Replies (1)

quote:
The Stallions finally get payback for the Stars knocking them out of the playoffs twice in the 80's

But...I thought this was the inaugural USFL Championship? That's what the ads said.
Back to top
Reply
Replies (1)
OptionsTop
Replies (1) 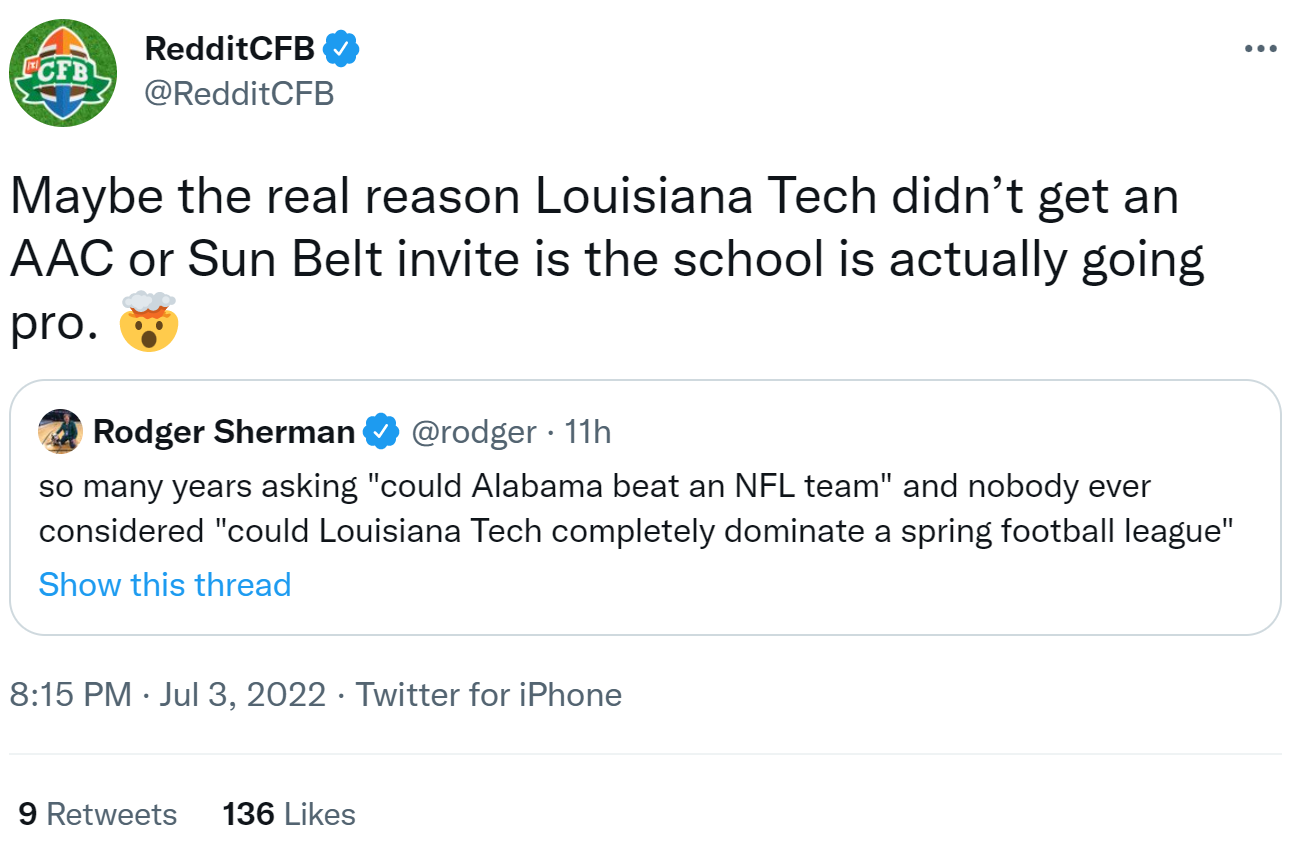 Posted by KillTheGophers on 7/4/22 at 7:48 am to Junky
Say what you want to about Holtz, but he pushed out a ton of guys to professional football from Louisiana Tech.

For a G5 school, it is insane how many of his players were in the NFL.
Back to top
Reply
Replies (1)
OptionsTop
Replies (1)

to Everyone
Advertisement
Back to top
winston1970 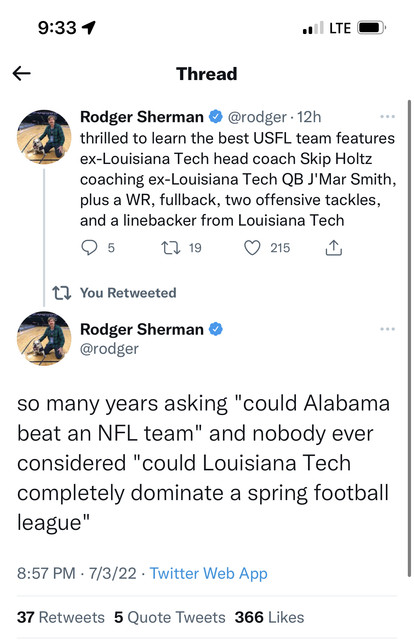 In the post-game, he went on and on about how much fun he had as a coach in professional football, from the draft, to building the team, etc.

It sounded to me like he was hinting to the NFL that he would accept their call for an assistant/coordinator interview.
Back to top
Reply
Replies (0)
OptionsTop
Replies (0)

quote:
What are they doing?

First with no timeouts you throw way short of the sticks, then you throw a bad pick to end it

i liked most of the games this year, very disappointed the breakers didnt even try to find a decent QB to replace sloter.

another thing that bugged me about how the usfl was officiated was the intentional non calls by officials allowing PI as well as obvious holding on nearly every play. unless the guy was taken to the ground, they pretty much allowed them to grab them, hold onto their arms, and mug receivers constantly. that said i liked the lack of penalties for ticky tacky BS but you have to call games fairly and throw those PI flags. im sure it was a league directive to not call penalties because fans hate them, but you have to play within the rules and call those

it really sucks that they broke that guys leg just before he is getting married, i feel bad for him and her
This post was edited on 7/4 at 11:09 am
Back to top
Reply
Replies (1)
OptionsTop
Replies (1)

on 7/4/22 at 6:51 pm to keakar
Damn, I didn't know this went on today and the Stars were in the final. That means they've been in every USFL final.
Congrats Birmingham!!

on 7/4/22 at 7:07 pm to cattus
I really appreciated that this was a no-bullshite, football-focused league. That’s the strength of the league.

The main weakness of the league needs to be addressed, though. It’s the average player quality. The games were all competitive, but they were on par with minor college football. Most games were like watching Tulane play Southern Miss.

Stop relying on NFL practice squad rejects for your players and raid the hell out of the NCAA transfer portal. Get up and coming and younger players. Ditch the three years out of high school requirement and lower it to two years out. Whatever it takes… find more explosive players and add more players to the rosters.

I really like the USFL. I want to see it continue. But we are going to need some dudes in this league at some point. Any ideas on how to do that?
This post was edited on 7/4 at 7:09 pm
Back to top
Reply
Replies (2)
OptionsTop
Replies (2)

on 7/4/22 at 7:34 pm to SpqrTiger
Can’t really see a way unless they go LIV Tour and pay obscene amounts of money to top players.
Back to top
Reply
Replies (0)
OptionsTop
Replies (0)

quote:
I really like the USFL. I want to see it continue. But we are going to need some dudes in this league at some point. Any ideas on how to do that?

Put someone from the Hunt family in charge then draft Joe Namath.