quote:
The 2007 Pittsburgh vs. West Virginia football game (also known simply as 13–9), or the 2007 Backyard Brawl as the rivalry is named, was a college football game held in Morgantown, West Virginia that marked the 100th Backyard Brawl. Unranked and 4–7 Pitt, a 28½ point underdog, pulled the upset over archrival WVU who, coming into the game, was ranked second in the BCS and AP Poll and first in the Coaches' Poll. By upsetting West Virginia in the Mountaineers' regular season and home finale, the Panthers knocked WVU out of what had been assured to be their first appearance in a BCS National Championship Game and a shot at their first ever National Championship.[1] The game was one of the most important Backyard Brawls in the series history, one of the biggest upsets in both Pittsburgh and West Virginia history, one of the biggest upsets of the season, and was voted as the "Game of the Year" by ESPNU. 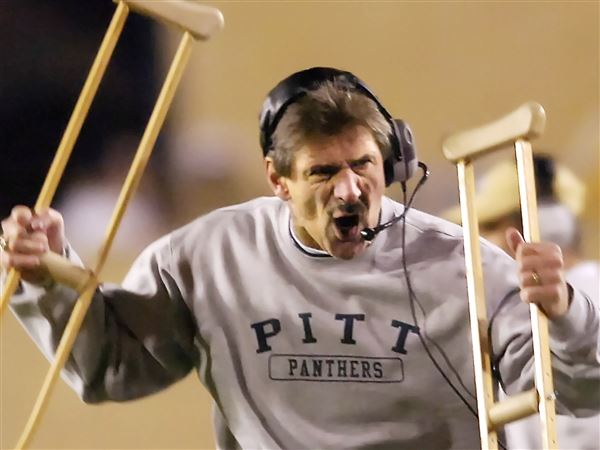 Dave got that sequence started.
Back to top
Reply
Replies (0)
OptionsTop
Replies (0)

on 12/1/22 at 12:46 pm to BilJ
I wonder how many LSU fans have bought him a beer in these last 15 years? And how many different places. Probably all over the world. Bet he’s got some good stories.
Back to top
Reply
Replies (1)
OptionsTop
Replies (1)

And Miles’ impromptu “damn strong football team….have a great day” press conference. One of the wildest days in college football history. One of the best for me. But I actually liked Miles and defended him (until he couldn’t be defended any longer).

I will ask you, though, Bilj. Was it worth it? I think Les was going to Michigan. Whether it was Herbie’s premature reporting, the fact all that shite happened and we wound up in the BCSNC (I don’t think Les expected us to make it, but I also don’t think he would have left once we did), would you trade that glorious day and the subsequent NC in order to have gotten rid of him in ‘07 rather than 9 years later?
Back to top
Reply
Replies (1)
OptionsTop
Replies (1)

Could you have pulled Nick after year one at bama? Would we have gone after Rich Rod? Promoted Pelini? A lot of variables in play there.

I was at that NCG and on bourbon when Les came out on the balcony with the trophy, tough to give those moments up.
Back to top
Reply
Replies (2)
OptionsTop
Replies (2)

re: Happy Dave Wannstedt Day- 15 Year AnniversaryPosted by I-59 Tiger

on 12/1/22 at 1:34 pm to BilJ
I remember driving back home from the SECCG after beating Tennessee. I could not believe the updates I was hearing on that Pitt-WVa game. Unbelievable.

on 12/1/22 at 2:01 pm to BilJ
The most inconsistent mediocre man in coaching football
Back to top
Reply
Replies (0)
OptionsTop
Replies (0)

to Everyone
Advertisement
Back to top
Hot Carl

quote:
hmmmmm....tough to say, I'd have to go back and look at the pool of candidates and see.

Yeah, I don’t remember the timing that well. Had Les been rumored long enough for us to talk about candidates or did it all just happen so fast?

quote:
Could you have pulled Nick after year one at bama?

I think we’d have definitely tried, and he probably would have wanted to, but that would have been a bad, bad look for him to bounce again after just one year. Especially when the whole “Do I have to say it? I guess I have to say it. I will not be the head coach at Alabama” quote was so fresh. If anybody would have not given a frick, it was him. But still, that would have been a big risk at that point of his career to burn so many bridges so fast. And didn’t he and Skip not end on great terms?

quote:
Would we have gone after Rich Rod?

Probably. But you know how our fans are—that loss to Pitt would have soured a lot of people. And he turned down Bama for Michigan that year. I know he has Louisiana ties and we were in a better spot than Bama, but was he turning down Bama or just saying yes to Michigan? Would he have chosen them over us too?

He was hot. Certainly possible. Could have brought Jimbo back home too. He didn’t know how much longer Bowden would coach. But would Skip hire a coordinator? Wasn’t Gary Patterson linked to us at some point?

quote:
I was at that NCG and on bourbon when Les came out on the balcony with the trophy, tough to give those moments up.

You know you wouldn’t give that up. I certainly wouldn’t.
Back to top
Reply
Replies (1)
OptionsTop
Replies (1)

on 12/1/22 at 2:40 pm to BilJ
My wife bought me SEC championship tickets for Christmas and after the Arkansas game, I didn't even want to go. But I went, and watched Perrilloux play his best (of very few) game as a Tiger and Zenon's game changing pick six, and enjoyed watching Big Orange file outta the Georgia Dome. As I walked back to my hotel room, I kept thinking "what coulda been". And then this happened! (along with OU thumping Mizzou) Best wishes Dave... wherever you are!
Back to top
Reply
Replies (0)
OptionsTop
Replies (0)

re: Happy Dave Wannstedt Day- 15 Year AnniversaryPosted by CBandits82 on 12/1/22 at 5:06 pm to BilJ
Was at bright side bar and grill (RIP) for this and the place was bananas.

I’ll never forget where I was on this day

on 12/1/22 at 5:26 pm to BilJ
Wanny was actually on Chicago sports talk radio this afternoon doing some Bears analysis. I almost felt compelled to call in just to give him a Geaux Tigers.

on 12/1/22 at 6:13 pm to BilJ
Him and lsuMatt .. I literally made a list of what needed to happen and scratched them off at they did. Bought ticket “reserved” for $5 each and figured I was putting money in the trash.

Boy was my hubby surprised with tickets for Christmas!
Back to top
Reply
Replies (0)
OptionsTop
Replies (0)


So we're not going to give LeSean McCoy any love for that night?
Back to top
Reply
Replies (0)
OptionsTop
Replies (0)

Without Dave, there is one less title in the trophy case.
Back to top
Reply
Replies (1)
OptionsTop
Replies (1)