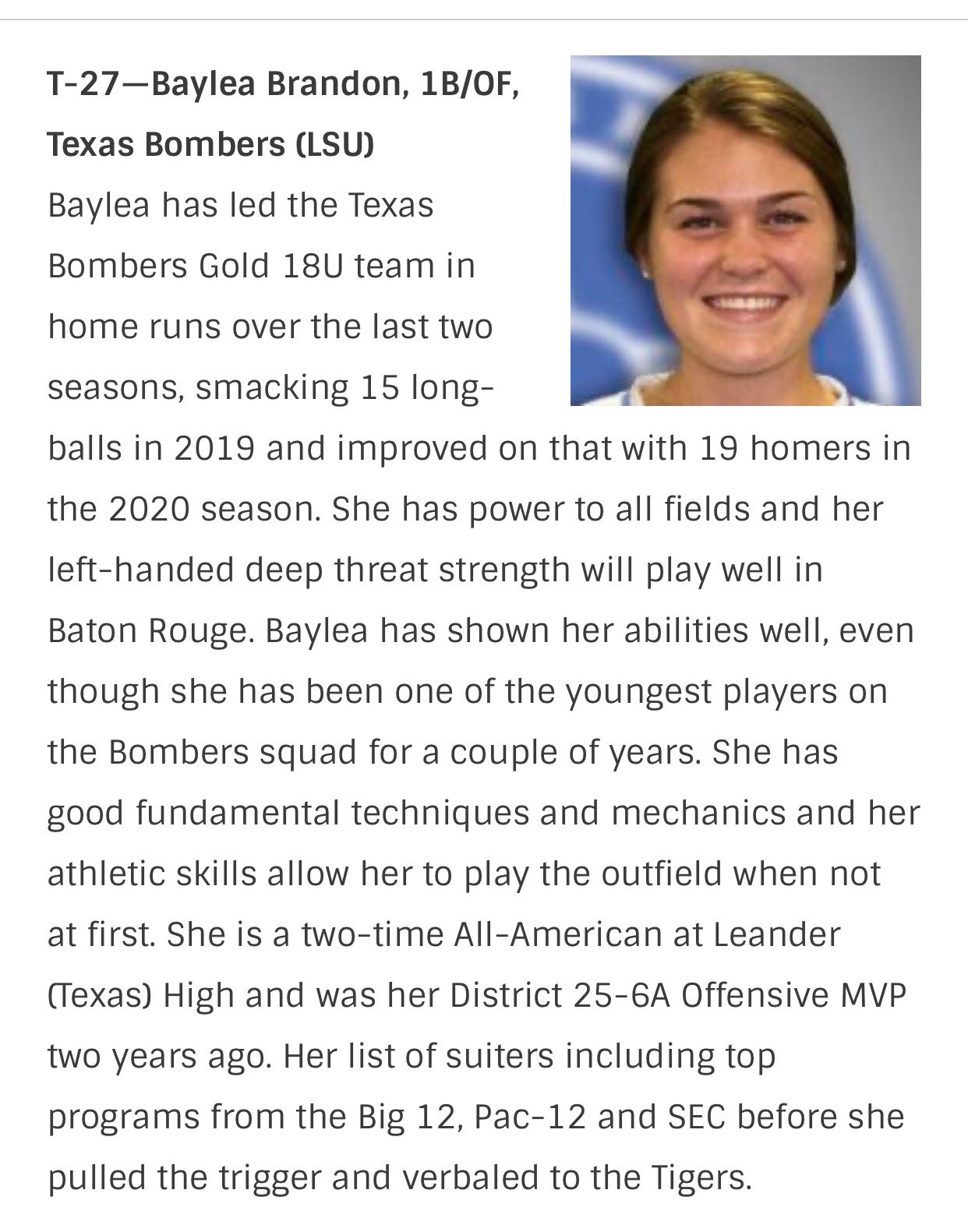 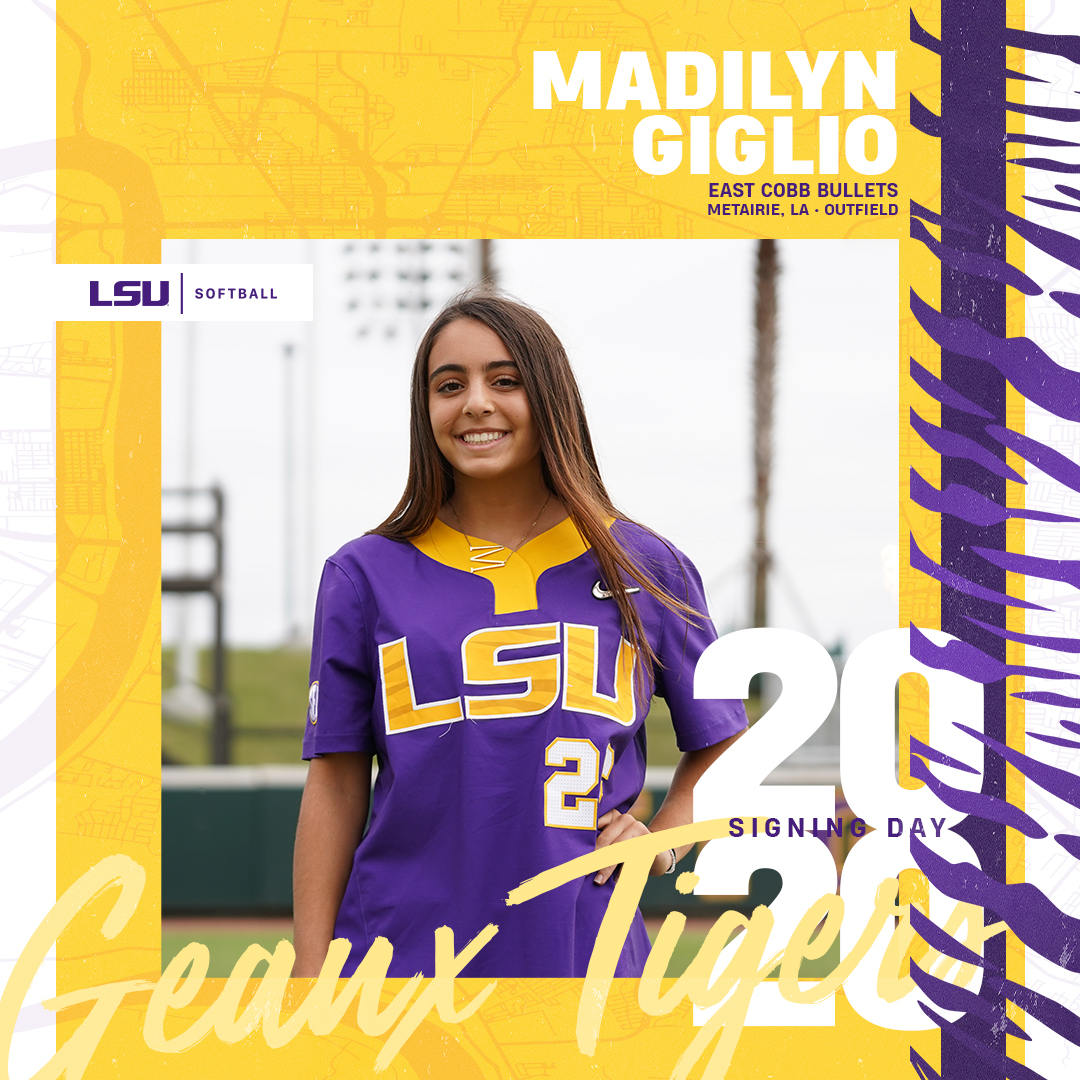 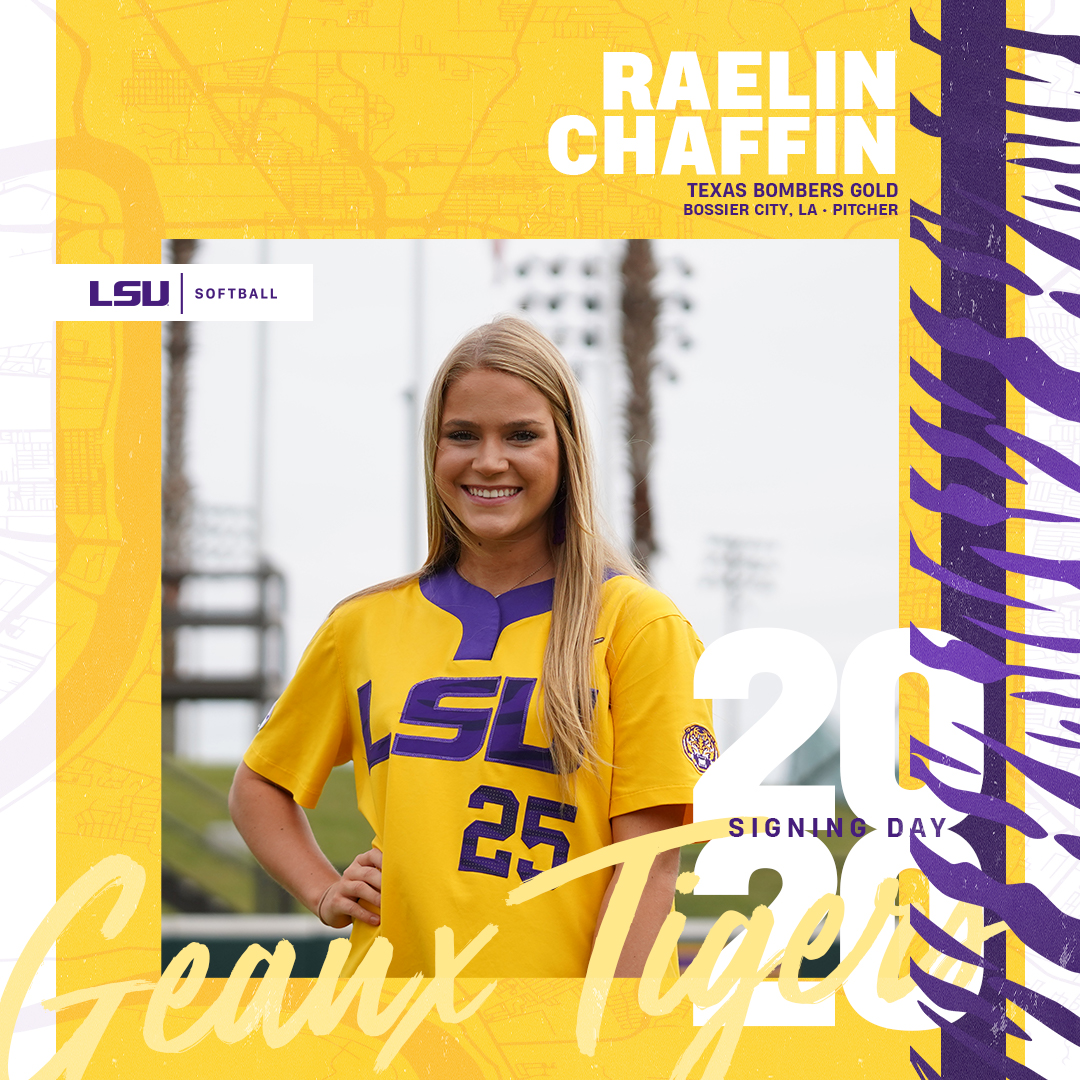 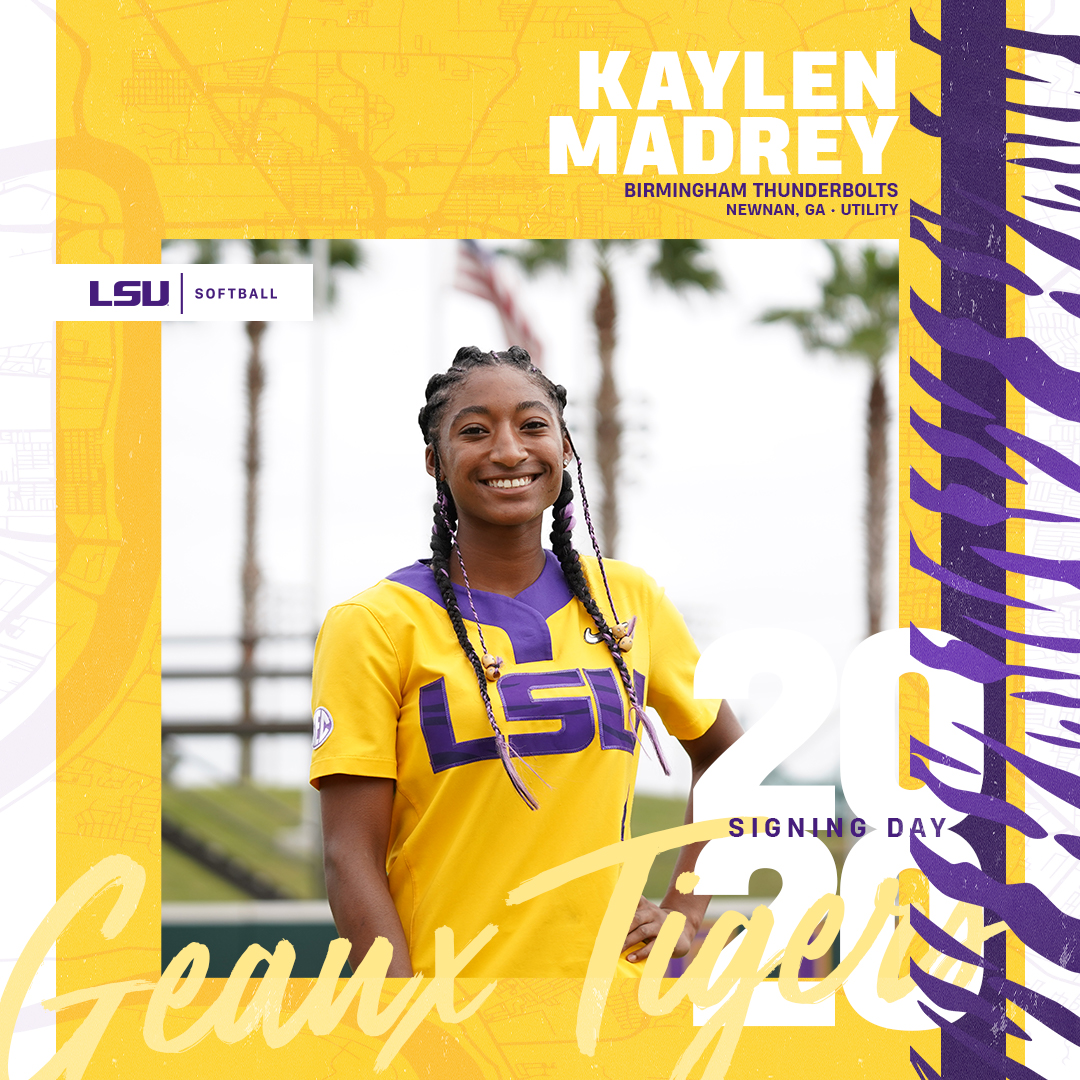 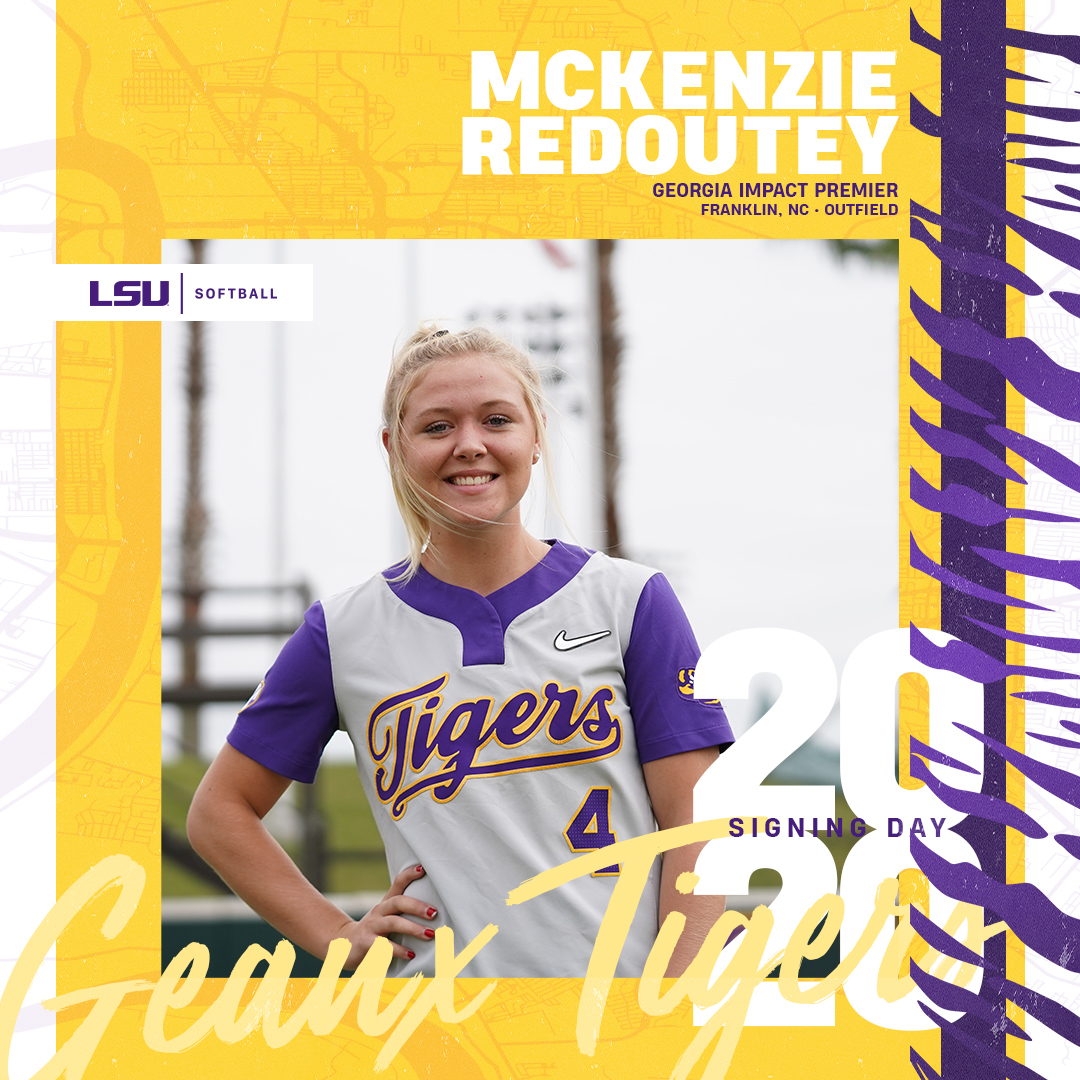 quote:
Peterson was a highly recruited shortstop in softball. That day she was on her visit to the University of Washington. While on the ride, Heather Peterson said she reviewed the pros and cons of each school that was recruiting her daughter. By the time they were back on the ground, Sydney Peterson made it clear that LSU, not Washington, was the school that felt like home.

"I just felt like for a 14-year-old, that is probably the best way to describe that feeling that I belong here," Heather Peterson said. 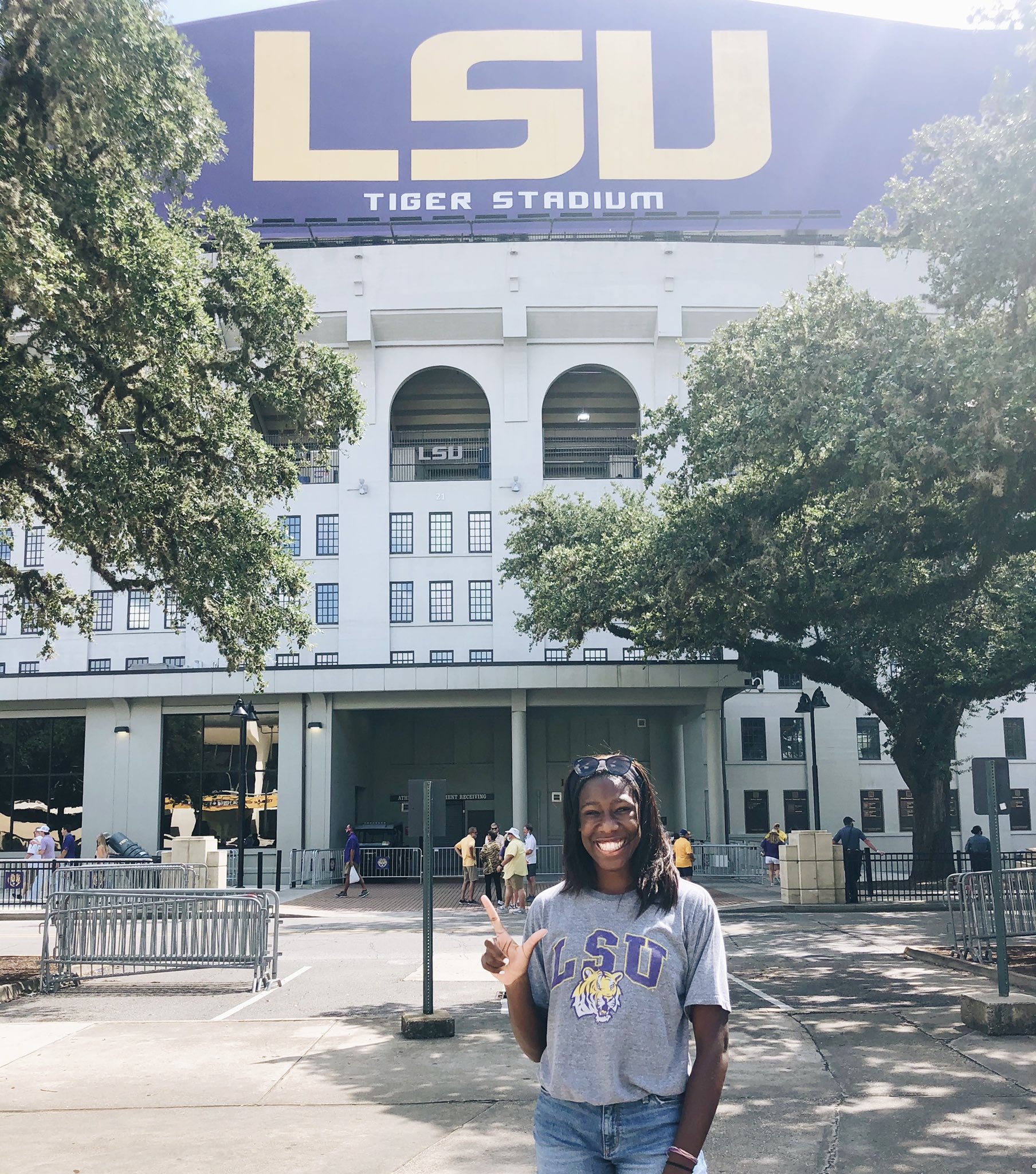 on 11/20/20 at 2:50 pm to Tigerbait357
I find it odd they don't acknowledge the signees' high school on their graphics along with their travel ball team names.
Back to top
Reply
Replies (2)
OptionsTop
Replies (2)


Because for every good HS softball coach, there are 50 just getting the extra pay stipend. HS in LA is MLK Day to end of April...3 months. The other 9 months girls are They are with their travel team getting better coaching, more structured practice and 1000 times better competition. Travel is set up for college coaches to see them play. You barely ever see a coach at a HS game. Most college coaches will tell you HS softball basically takes 3 months away from their development. Girls on the few good HS teams with good coaching love it...but the vast majority just wait for it to be over.
Back to top
Reply
Replies (1)
OptionsTop
Replies (1)

I've been a high school coach for over 30 years and a travel coach for 15 of those and there are plenty of those in both realms who are passionate about the sport, and plenty in both who are there to draw money or just to make sure their darling daughter gets to start and play the whole game.

Most of the kids do post their high school teams on their profiles as well. Many are proud to represent their communities. I'm realistic that travel ball does give them the best shot of being seen by college coaches as our seasons are at the same time.

Many college coaches have contacted me about players they are interested in. I see them in the classroom and I have them Monday-Friday from September to May. In Texas our season is mid-January to end of May plus I have them in athletic period every day. Those coaches who don't ask me, I'm leery about.

When I coached 18U gold ball, I had players from all over the area. We only got to practice a couple of times per month together, but I see my HS kids every day for 9 months per year.

I have an incoming freshman pitcher who is going to be really good, but her travel coach this fall benched her the past month because she doesn't throw 6 pitches. Me and my pitching coach have cured her from her crow hopping... not them, but not she's wondering if all of this work is worth it. I'm going to spend the next couple of months working to get her confidence back and to having fun again.

It's kinda weird that her 14U coach benched her, but she threw 14 innings in HS fall ball against all 6A teams and only gave up 1 run.

So there's both good and bad in both realms of the game. To throw all coaches into the same bus isn't really fair.
This post was edited on 11/22 at 8:42 pm
Back to top
Reply
Replies (2)
OptionsTop
Replies (2)

on 11/26/20 at 2:23 pm to 18handicap
Just a random thought so far this fall, the versatility of this freshmen class stands out a lot. Pilon, Coffey, Kennedi H, and Newland all can play many positions. Pilon and Coffey have been playing and training at 3B as well in addition to 2B and have been looking very strong.

Morgan Smith did some very good things in the circle during the purple, gold and teal series.

I'm curious how Torina will manage playing time this season. I believe we will see essentially the same starters as last year but I think you have some freshmen who are gonna earn some opportunities.

LSU was suppose to do another home and home with the cajuns but I don't know what the SEC is gonna do yet. It may end up being in all conference schedule unless they allow teams to schedule a few games against local teams. All the large tournaments are getting canceled (Clearwater Invitational). The large roster might actually be beneficial this year, especially if kids are required to sit out due to contact tracing
Back to top
Reply
Replies (1)
OptionsTop
Replies (1)

to Everyone
Advertisement
Back to top
18handicap

on 11/26/20 at 5:54 pm to Tigerbait357
Agree!! I flew over on Tuesday and watched the Gold vs Teal and just those players are so good. Add the other 10 and we could be unbelievably good!
Back to top
Reply
Replies (0)
OptionsTop
Replies (0)

on 12/15/20 at 9:11 am to 18handicap
My daughter didn’t have a bad coach. She played for one of the top 10 programs in LA with multiple state championships and was a 4 year starter. That doesn’t change the fact that the vast majority of high school coaches, at least in LA, could care less about their program...only thr stipend. Are you a teacher at school...or just a coach. Big difference.
Back to top
Reply
Replies (1)
OptionsTop
Replies (1)

I'm inferring that you may think that teaching gets in the way of coaching. It's a large load to do both, but a large majority that I know do well with both. I always said that as a principal, when my coaches are doing their jobs in the classroom as hard as on the field/court, they are some of my best teachers and coaches. I made sure I didn't slack off in either place.

I go to many conferences/clinics each year to get as much information as possible. I host a clinic here in Houston and I get over 700 HS coaches each year to learn from great coaches.

In my area, I still put up the number that 90% of us are competent and hard working coaches who try to do our best for our student-athletes.
Back to top
Reply
Replies (1)
OptionsTop
Replies (1)

on 1/7/21 at 1:49 pm to 18handicap
As of now the SEC is suppose to have a full schedule. The date I keep hearing is Feb 11 for start of the season. I would think that would be decided on pretty soon.

We were suppose to play in the Clear Water invitational but that was canceled.
Back to top
Reply
Replies (1)
OptionsTop
Replies (1)

quote:
Which freshman are standing out. Man can’t wait for the season

I haven't been able to really see them play much at all this fall due to COVID stuff going on but I heard Morgan Smith has been impressing all around. Ali Newland has been really swinging the bat well. I got see to Hayden Brown hitting for a little and she absolutely crushes the ball.

Coffey and Pilon have been very versatile and doing great things in the infield being able to play multiple positions well.

I expect very similar lineups to last year but competition is very strong in spots due to the freshmen. Of the returners Doyle, Sunseri and Kilponen have been really strong this fall. It appears Doyle put in some work on that swing this offseason, I hope she has a great year.

on 1/11/21 at 2:41 pm to SaintLSU
I'm anxious to see if Clark and Cummins were an anomaly, or if it was a signal of what they will be in the lineup. And of course Pleasants and Briggs. Hopefully Sunseri can regain her stroke. If she does, this will be a murderer's row lineup.
Back to top
Reply
Replies (2)
OptionsTop
Replies (2)

on 1/11/21 at 2:46 pm to CajunRocks
Jesus if Beth can recruit and develop hitters as well as she does pitchers we might have a dynasty
This post was edited on 1/11 at 4:31 pm
Back to top
Reply
Replies (0)
OptionsTop
Replies (0)

quote:
I'm anxious to see if Clark and Cummins were an anomaly, or if it was a signal of what they will be in the lineup. And of course Pleasants and Briggs. Hopefully Sunseri can regain her stroke. If she does, this will be a murderer's row lineup.

I hope Stewart gets back to how she was playing as a freshmen. She seemed to press a bit last year when things weren't falling at first. She was heating up but then the season ended. I notice though especially with the slappers, they all pitch them that screw ball outside now and its almost impossible for slappers to hit that without stepping out of the box.
Back to top
Reply
Replies (1)
OptionsTop
Replies (1)