2
G+ is a fast pass for all attraction except the premium rides, you can use one per ride per day.

You can only book one G+/LL at a time, no more first three, then one at a time.

LL is an addition charge for a fast pass to the premium rides, and you can only do two of these a day.

Am I correct so far?

If I have park hopper, and I’ve used my two premium LL passes at my morning park, can I get a LL pass for a premium ride at my next park?
This post was edited on 1/12 at 2:48 pm
Back to top
Reply
Replies (2)
OptionsTop
Replies (2)

If you are staying at a Disney resort you can make the paid pass at 7am, if not you have to wait until the park opens.

Supposedly there is more balance between regular line and the lightning line than there was betwee standby and fast pass, so standard lines move faster now.
Back to top
Reply
Replies (1)
OptionsTop
Replies (1)

My main question, that I cannot find an answer to:

on 1/12/22 at 7:01 pm to theantiquetiger
Basically with lightning you can use it every 2 hours and can choose any ride on the lighting level regardless of park. Most parks have 1-2 rides you must pay 7-15 dollars for for just one ride. Rise of the resistance will actually sell out by 8 am so best to do Hollywood one morning and go straight there where the line will be about 45 minutes
Back to top
Reply
Replies (0)
OptionsTop
Replies (0)

No. Limited to two per day, even if you park hop.
Back to top
Reply
Replies (1)
OptionsTop
Replies (1)

quote:
No. Limited to two per day, even if you park hop.

I have finally learned which attractions are premium rides. We are not interested in a few of them (Mine Train, Space Mountain), and Everest will be closed. 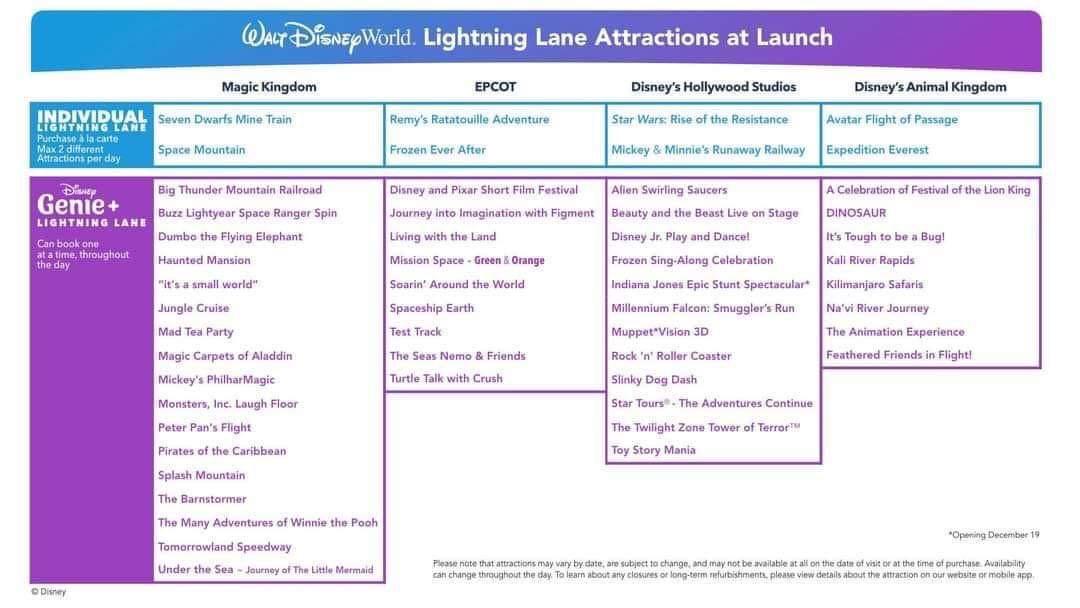 Posted by The Drizz

Yea, I made that mistake not realizing. My kids were very upset. Disney has you shelling out money the entire time you are there, they can at least give you the option to pay for the premium rides at least one time per park visit. Even if that means paying for more than 2 a day. It makes no sense at all.
Back to top
Reply
Replies (1)
OptionsTop
Replies (1)

on 1/13/22 at 5:32 am to The Drizz
I wasn’t sure how it works but the way it’s being described in here (at least how I’m interpreting it) is that it hasn’t done much for efficiency and is more of a money grab than anything else?

How are the waits for the premium and regular rides if you just bypass both options?
Back to top
Reply
Replies (0)
OptionsTop
Replies (0)

No, two per day. Thats it.
Back to top
Reply
Replies (1)
OptionsTop
Replies (1)

quote:
How are the waits for the premium and regular rides if you just bypass both options?

Depends on the time of day, the day, the park, etc.

I was there all last week and saw the standy at Rise over two hours one afternoon and saw it under an hour just two days later.

If you want to save the money and not by an Individual Lightning Lane (ILL) and you are a resort guest the park opens for you 30 minutes before advertised opening so make sure you're at that park an hour before it's listed opening time OR get in line just as the park is gettin ready to close.

We bought the ILL for Rise of the Resistance, Mine Train and Remy but did Space Mountain and Frozen Ever After using standby.

DO NOT buy the genie plus add on for your entire trip in advance. It holds hardly no value at Epcot or Animal Kingdom and I think if you have enough time to do Magic Kingdom over two days I would do it one day and not the next. The day you use G+, arrive later and the day you don't use it, get there early.
Back to top
Reply
Replies (1)
OptionsTop
Replies (1)

Posted by The Drizz

quote:
DO NOT buy the genie plus add on for your entire trip in advance. It holds hardly no value at Epcot or Animal Kingdom and I think if you have enough time to do Magic Kingdom over two days I would do it one day and not the next. The day you use G+, arrive later and the day you don't use it, get there early.

I agree with this statement. I purchased on our 3rd day (Magic Kingdom) and used it very efficiently. We roped dropped Epcot and HS, while purchasing the 2 ILL rides and never needed Genie + on those particular park days.
This post was edited on 1/13 at 6:57 am
Back to top
Reply
Replies (1)
OptionsTop
Replies (1)

on 1/13/22 at 9:55 pm to The Drizz
Me and the gf went last week and after waiting in miserably long lines in MGM our very first day I elected to upgrade to genie+. At first I thought it was ridiculous how it works but then when I figured it out I loved it. I will say it’s only really worth it in magic kingdom though since there’s so many rides, it probably would have been worth it in mgm but we didn’t have it that day.

The main thing about is you can’t be scared to schedule rides close together, because it gives you an hour window to make it to the ride. So you can potentially knock out about 3 rides that normally have really long lines, in a couple hours. And you are almost always on in about 5 min because it seems a lot of people don’t know how to use it or just decide it’s not worth it

The seperate lightning is for the 2 longest lines in each park and has to be bought separately, (only 9-12 bucks) we weren’t able to do that since we weren’t staying at Disney so we just made a mad dash to those once the park opened and knocked them out early.

This was my first time to Disney so I’m no pro but my guess is they did this to keep people with a fast pass from riding the same ride over and over again thus fricking the normal line people. I do think it’s sucks you can only book each ride once though
This post was edited on 1/13 at 9:58 pm
Back to top
Reply
Replies (0)
OptionsTop
Replies (0)