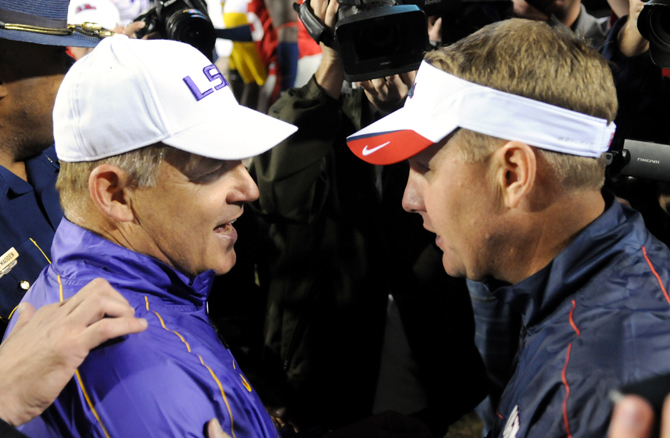 The Ole Miss Rebels will bring the nation’s longest active streak of allowing 20 or fewer points in 9 straight games to Tiger Stadium on Saturday. Per USAToday.com

The Rebels lead the country in scoring defense (10.6 points per game) and have allowed just six total touchdowns through seven games. The Rebels defense has scored four times themselves, as well.

Can LSU's offense step up to the challenge?
Filed Under: LSU Football
Related:
Have You Seen This Before? Joe Burrow Connects With Ja'Marr Chase At Bengals Practice
SEC Analyst Ranks The 5 Best Quarterbacks In The Conference
Preseason SEC Football Media Poll Announced
Love This Tweet From Devin White On Super Bowl Ring Night

Photo: Will Wade And Cam Thomas Are Looking Sharp At The NBA Draft

Coach O was having fun.

3
Photo: Will Wade And Cam Thomas Are Looking Sharp At The NBA Draft
Boot up.

13
Beer And Wine Will Be Available For Purchase At The Rose Bowl Stadium For LSU’s Opener
Good news Tiger fans.

12
Derek Stingley Jr. Is On The Hornung Award Watch List
Well deserved.
Damone Clark Is On The Wuerffel Trophy Watch List
No. 18.

6
LSU Coaches Caravan Has Been Canceled Due To The Rise Of Covid-19 Cases
Here's the update from LSU.